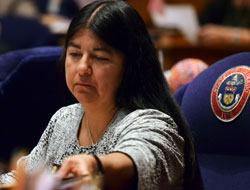 Her cell phone was at the ready. There was a laptop streaming one TV news channel; a desktop computer was tuned to another. A second desktop had a U.S. Supreme Court blog site up. The stakes felt so high that day. Any minute the high court would decide if the Affordable Care Act would stand.

“I was just so happy,” she says, remembering feeling a sense of relief wash over her.

But there was not to celebrate or exhale. Aguilar began tweeting, posting on Facebook and sending dozens of emails to her fellow lawmakers in the Colorado General Assembly. She told them she wanted to help lead efforts to expand Medicaid in Colorado. At there could be universal health care in the state, she says, and Colorado could be an example for the rest of the nation.

“The stars aligned for me to be here at this time,” says Aguilar, a 52-year-old Denver Democrat, who is currently assistant majority leader in the Colorado Senate and the only practicing physician in the state legislature.

Within hours of the Court’s decision, Aguilar continued a personal and family journey that has been nothing short of remarkable.

Both sets of her grandparents came to America from Mexico in the early 1900s to pick cotton in Texas, working as sharecroppers on separate farms. Aguilar’s mother finished only fifth grade, her father third.

Aguilar is the youngest of four daughters, raised in inner-city Chicago where her father worked in a factory. After her two oldest sisters became pregnant by age 18, her parents moved to a new city neighborhood where Aguilar was one of the only Latino children in her grade school.

She looks back at that time as pivotal. “Sometimes if you feel isolated you either become disruptive or you excel,” she says. She picked the latter. She would take the bus to spend time with a suburban church youth group. Being with kids for whom college was the expectation helped nurture her own ambitions.

She remembers the day the teacher of her high school advanced-placement biology class asked about her goals. Aguilar said her boyfriend wanted to be a doctor, while she planned to become a teacher. The teacher was aghast. “Why does he get to be the doctor? You’re so much smarter than he is.” 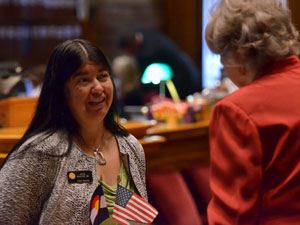 “Really?” she remembers thinking. But that was all it took. Her career path swerved. She won a free-ride scholarship to Washington University in St. Louis, where she majored in biology and set her sights on medicine. She spent a year abroad studying in England and then attended the University of Chicago Pritzker School of Medicine.

She met her husband of 25 years, Thomas Bost, MD, in 1988 during her residency at the University of Colorado School of Medicine.

While she could have had her pick of practices, she chose to take a position in 1989 at the Westside Family Health Clinic helping the poor and underserved, dispensing health care, advice dignity. She has stayed for two decades.

The position further cemented a sensibility and recognition of how the decks are too often stacked against minorities and the poor in health care, she says. Aguilar remembers sensing this bias in medical school. “There was just this cultural bias against people in poverty. There are assumptions being made all the time,” she says.

Even today she sees it. Whenever she speaks to groups of doctors, including at last fall’s Colorado Medical Society convention in Vail, there is always at least one who makes a comment about getting Medicaid patients to take personal responsibility.

“You have no idea about people’s lives,” she reminds those whom she thinks are too quick to dismiss entire populations, particularly the elderly and disabled. She reminds critics that setting aside an hour to exercise is a luxury. So is buying fresh fruits and vegetables.

“I always say something,” Aguilar says.

Aguilar speaks out because she understands better than most.

“Medicaid is sacred,” she says. It is that comes from being a parent who worries about a child who will need lifelong care.

In addition to a son, she has twin daughters, Amy and Meg, born eight weeks early in 1994. The umbilical cord had been wrapped around each. Amy had been deprived of oxygen throughout the pregnancy. It was doubtful she would survive, yet she confounded the experts. Today, Meg is an 18-year-old high school senior with dreams of medical school. Amy has made incredible strides, but she is severely delayed and will always need intensive support.

The waste, inefficiencies, politics and, most of all, the inequities ingrained in the nation’s health care system have frustrated and infuriated Aguilar: “We are not the kind of society, Lord help us, that would let someone die on a curb because they can’t pay for [health care].”

In 2010, Aguilar entered politics for the first time, an underdog who won victory among six candidates vying for appointment to a vacant seat in the state senate. Last fall, she won reelection by an overwhelming majority.

Since becoming a state lawmaker, Aguilar has been a passionate advocate for universal health care, but she says that should not be confused with a belief that government should run it. As a she sees how politics can hamstring medical care. “Decisions are not based on research and evidence but with the strongest constituent voice and most powerful lobby.”

Aguilar prides herself with being able to reach across the aisle and work with Republicans to find common ground. She thinks she has their ear and respect because she has proven herself to be fiscally conservative. “I’m trying to capture the money we waste and use it to cover everyone,” she says, adding that opponents to universal health care have “created a system where we will spend $1.50 so we don’t have to spend $1 on health care.”

Sen. Ellen Roberts, a Republican from Durango, says Aguilar is willing to listen to all sides when it comes to health care. “She and I have worked together on Health and Human Services committees for the last couple years and I do think she likes to have those conversations, including with those who aren’t necessarily headed for the same goal as she is, and that includes those of us on the Republican side of the aisle.” Roberts also was pleased that Aguilar took the time to travel to Durango to gain perspective on what is needed in rural areas. “I appreciated the extra effort.”

Aguilar is not all work and no play. Her daughter, Meg, reveals her mom’s guilty pleasure of “chick flicks,” her favorite being “13 Going on 30,” a comedy about an adolescent who fast-forwards to adulthood. In the movie, there’s a scene where the character does Michael Jackson’s “Thriller” dance. In a nod to the movie, Aguilar took a dance class with Meg so they could do the same dance in a flash mob on the 16th Street Mall in downtown Denver.

Meg says her mother has instilled in her a strong sense of right and wrong and to stand up for what she thinks is right.

“I will take ‘no’ for an answer if you can tell me why. You have to convince me,” Aguilar explains. “I may not win but I can sleep at night.”