(December 2017) Sandy and Jerry Doria glowed in their wedding pictures. Her long blond hair flew as they danced on a terrace in the magical light of sunset. That was July.

Four months later, Sandy received jolting news. She had been experiencing some unexplained numbness in her left arm and a visit to her doctor revealed she had breast cancer.

Sandy, now 61, figured she’d quickly get treatment and put cancer in her rearview mirror. But she soon learned she was dealing with a fast-growing, aggressive type of cancer. Just before Christmas 2011, she finally shared the news with Jerry, now 71. A retired engineer, Jerry researched breast cancer, methodically tracked every treatment and supported Sandy at each visit to the doctor.

She made sure they kept joy at the center of their lives. They spent time with seven children and seven grandchildren. They embraced their new home in Aurora after moving from the California coast. With friends and relatives, they went deep-sea fishing off the Florida Keys. Sandy even kept working as long as she could, giving facials to clients. She tended the flowers in her garden and kept swimming laps, finding serenity in cool, blue water.

Despite multiple surgeries and many rounds of chemo and radiation, the cancer kept spreading and recurring. All her life, Sandy had loved having long hair, but she lost it in the treatments she hoped would save her life.

There were certainly times when she felt like giving up.

But the unwanted journey yielded surprises too. The challenge of facing cancer together cemented Sandy and Jerry’s love. And Sandy’s saga has left her doctors at UCHealth’s University of Colorado Hospital a bit speechless and mystified.

When it comes to metastatic cancer, doctors never speak of cures. And they definitely don’t talk about miracles. While it’s hard to characterize exactly what happened to Sandy, her doctor says it’s nothing short of remarkable.

Sandy’s ordeal began when she noticed numbness in her arm, so she visited her doctor. Even with a diagnosis of breast cancer, she wasn’t panicky.

“I thought I might have to go through some treatments. Then in six months, I’d be done,” Sandy said. But a scan soon showed a very large and aggressive tumor in Sandy’s breast.

Sandy called Jerry from California, where she was still seeing clients as she prepared to move to Colorado. “I’m in a bit of trouble,” she said.

Neither wanted to worry about treatments before Christmas, so they postponed until January. By the time doctors started chemo treatments, the tumor had tripled in size. After chemo, a California surgeon took out the tumor along with 13 lymph nodes “just to be safe.” The doctors felt they had gotten all the cancer.

Just six months later, the cancer returned. This time in Sandy’s breast and left lung and her prognosis changed dramatically. Doctors told Sandy that the average life expectancy for people with metastatic breast cancer is 2.5 years.

Her particular kind of cancer — triple-negative — made the outlook especially grave. Typically with breast cancer, doctors target receptors that cause cancer cells to grow. But in Sandy’s case — and for about one in five people with breast cancer — the cells are not sensitive to three types of receptors: estrogen, progesterone and human epidermal growth factor. Sandy’s type of cancer had a dangerous ability to mutate, making it especially hard to fight.

Still, Sandy reacted to the ominous news in her typical upbeat attitude.

“Let’s have some fun,” she told Jerry. She quit work. They decided to take some great trips. They moved full-time to Colorado, living on the 18th hole of a golf community, even though neither plays golf. They bonded with new friends at the clubhouse and took grandkids to the pool. Jerry kept fishing. Sandy kept enjoying life.

And she pursued different treatments. Based on Jerry’s research, the couple decided to seek care at University of Colorado Hospital.

“I decided I needed to go to a university because they are cutting edge,” Sandy said.

“We were searching all over the country for places that would deal with triple-negative breast cancer,” Jerry recalled.

Jerry found Anthony Elias, MD, professor of medicine at CU School of Medicine, who treated Sandy for more than a year, using every tool he could. But Sandy’s cancer kept progressing.

Late in 2014, Sandy’s cancer reemerged again. This time, in red bumps and welts on Sandy chest, making it painful even to wear clothes. She relied on morphine to get through some days. Sometimes Jerry would hear her moaning in bed and there was nothing he could do. “I told Jerry. ‘I’m done. This is how I’m going out,’” Sandy recalled. 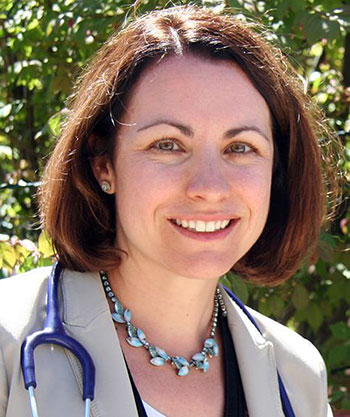 But instead of giving up, the couple chose to participate in clinical trials and Elias referred them to Jennifer Diamond, MD, associate professor of medicine. Petite and unassuming, Diamond doesn’t look like a super-hero., but for Sandy and Jerry, Diamond might as well have a cape to go with her white coat and stethoscope.

Diamond is a founder and co-director of the Women’s Cancer Developmental Therapeutics Program at the University of Colorado Cancer Center. The program, which Diamond and Christine Fisher, MD, MPH, associate of radiation oncology, launched in 2016, aims to increase access to clinical trials and promising treatments for women with breast and gynecological cancers.

Patients who sign on for experimental therapies can improve or suffer setbacks. They put their bodies on the line to help researchers learn valuable lessons about medications that might make a difference.

Sandy tried her first experimental drug in January of 2015. But the cancer progressed and she had to opt out of that trial. Sandy was deemed ineligible for a second trial. A third trial combined immunotherapy with chemotherapy. Enduring chemotherapy again, though, meant Sandy would lose her hair again. That was too high a price. Sandy just wanted to feel like herself. She said no.

But Jerry and Diamond tag-teamed Sandy and urged her to give it a try.

“I know this is tough,” Sandy recalls Diamond telling her. “You’re going to lose your hair, but we’ve had great results with this (drug) and it’s really promising. You’re a great candidate. Let’s try it.”

Sandy changed her mind and got the last space in the trial. That decision might have saved her life. 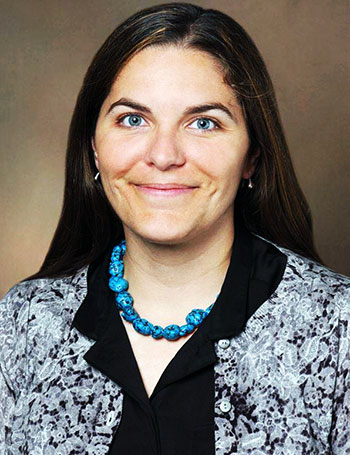 In combination with the chemo, Sandy received an immunotherapy drug that only had a number at first: MPDL-3280A. It later came to be called and TECENTRIQ and is now FDA-approved for bladder cancer.

Sandy started taking her experimental drugs in May 2015. On cue, her hair started falling out. But the painful tumors on her chest also began to disappear. At first, Sandy and Jerry would drive from their home in south Aurora to the Anschutz Medical Campus for infusions every Wednesday. After the four months, Sandy was able to stop the chemotherapy, while continuing the immunotherapy. She received those infusions every other week.

Aside from losing her hair, Sandy had few negative side effects for about one year. Then two scary setbacks hit her last summer. In July, a severe bout of colitis landed her in the hospital in grave condition for five days. She recovered only to suffer severe breathing problems and pneumonitis that resulted in another hospital stay of six days in August.

Both the colitis and pneumonitis can be side effects of the immunotherapy drugs. The was properly fighting Sandy’s cancer. But it appeared to be causing her immune system to attack Sandy’s organs as well.

Diamond told Sandy she’d have to stop her infusions. Jerry and Sandy were crestfallen. They were convinced that the drugs were necessary to keep Sandy alive, but they had no choice.

The couple kept coming in for follow-up visits with Diamond every six weeks. And a remarkable surprise threw all of them for a loop. Sandy did great.

It seemed that the immunotherapy drugs had retrained her body to find and kill the cancer cells. Even without boosts of new medicine, her body apparently was patrolling for cancer cells and knocking them out.

“The cancer has not come back,” Diamond said. “Whatever the immunotherapy did to her immune system has had a lasting impact.”

Now with cancer in remission, Sandy is again embracing everyday pleasures. She loves swimming and working in her garden. And, she’s growing her hair out again.

“It’s too early to say she’s cured of cancer, but this is as close as we’ve ever come to having a cure for metastatic breast cancer. It’s truly remarkable,” Diamond said.