(November 2016) Denver City Councilman and former CU Buffaloes linebacker Albus Brooks was literally running full-tilt into summer when a diagnosis stopped him in his tracks. His busy life of work and study – he’d been working on an MBA degree – suddenly swirled with a new layer of stress. Cancer? At age 37? 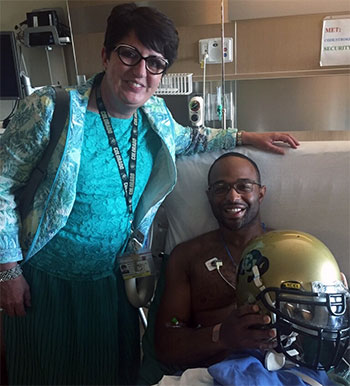 Fresh off running in a couple of road races, albeit painfully, Brooks went to his doctor, who immediately ordered a CAT scan. It revealed a large mass on his lower back, and a biopsy confirmed it was malignant. When Brooks asked about physicians with expertise in this kind of cancer, chondrosarcoma, all recommendations were the same: “Go to the University of Colorado Anschutz Medical Campus; their cancer team is the best in the state.”

Brooks, who represents District 9 on the Denver City Council, is an upbeat kind of guy, and his outlook brightened when he found focused and compassionate care at the CU Anschutz Medical Campus. At the CU Cancer Center, Brooks received the reassuring news that his cancer appeared treatable and he should be able to soon return to his busy life.

“I went home with tears in my eyes,” he said. The emotion was a mix of hope and gratitude.

‘I knew something was wrong’

Brooks, who played linebacker and safety for the CU Buffaloes from 1997 to 2000, was being his usual active self last spring when he felt a nagging pain in his lower back. He ran in the Colfax and Bolder Boulder 10Ks, and “in both races it was horrible,” he recalled. “I felt like I was expending a lot of extra energy. I just knew something was wrong.”

At CU Anschutz, Brooks first met Victor Villalobos, MD, , assistant professor in the Division of Medical Oncology and a specialist in sarcomas, a set of more than 50 different types of rare tumors that arise from soft tissues and bone. Villalobos introduced Brooks to the Cancer Center’s interdisciplinary sarcoma team, including Ana Gleisner, MD, , assistant professor of surgery, and Evalina Burger, MD, professor of orthopedics.

The tumor sat on Brooks’ pelvis, lodged between vertebrae in his lower back. He went in for an eight-hour surgery on July 5 at the University of Colorado Hospital (UCH), where the 15-pound tumor was removed by Gleisner, who Brooks described as a “rock star.” He remained in the hospital for a days then went home to his wife, Debi, and three children – Makai, 9; Kenya, 7; and Kaya, 4. 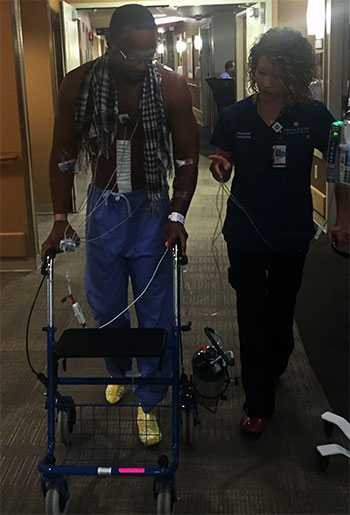 Work remained to fuse vertebrae from where had lodged, so Brooks returned to UCH for another lengthy surgery on July 18, this time with orthopedics specialist Burger. But this time Brooks entered the operating room with a heavy heart. His 71-year-old father, Perry, had died just five hours earlier from cardiac complications.

“This speaks, again, to the compassion of CU Anschutz doctors,” Brooks said. “Dr. Burger came in and saw that I had tears in my eyes and – not knowing about my father – she said, ‘I just want to hug you.’”

Her moment of prayer and silence in pre-op meant the world to Brooks and his family. “It was one of the most incredible experiences I’ve had,” Brooks said. “It’s just amazing: The relational aspect and the expertise at CU Anschutz – it’s all second to none.”

Brooks was bedridden for 36 hours after the second surgery, but, with the help of UCH nurses, he got back to his feet and walked the hospital floor each day to regain strength. He returned home on July 22.

Brooks wore a back brace for six weeks. He then began rehabilitation exercises for his back and will return to the CU Cancer Center every three months for checkups.

In addition to everything else that happened on July 18, that was the day Brooks was named of the Denver City Council. At a recent council meeting, he recounted his experience to fellow council members. “I told them, ‘I was a Division I athlete, and I’ve never been sick. I take pride in working out. And cancer chose me. If it chose me, it could choose anyone. Get checked out.’”

While having an active, healthy lifestyle certainly helped Brooks, so did his optimistic outlook. He recognizes that sudden illness is just part of life.

“Things do happen, and you’ve got a decision to make,” he said. “One, are you going to let it take you to a place where you don’t see joy, hope or optimism? Or, two, are you going to look at this as another day where I can see opportunity and hope? I chose the latter.”

As a public servant, Brooks has focused on human-centered policy decisions and initiatives. After his experience with cancer, he’s now also a strong advocate for quality health care and everyone’s right to access it. “I sent all my surgeons and doctors at CU Anschutz the articles (in the local media) about my cancer. Those people are all so amazing,” Brooks said. “I’m back at work now, and I’m so grateful.”