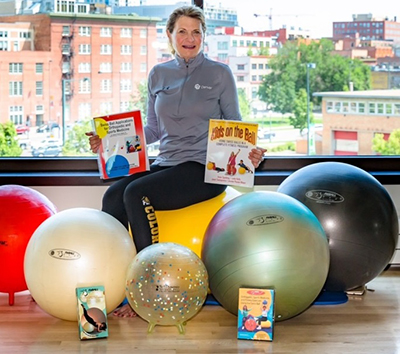 (October 2020) Joanne Posner-Mayer earned her physical therapy degree at CU in 1973 and then worked for more than six years in Switzerland. There, she was introduced to the use of “Swiss Ball” exercise balls in physical therapy.

She returned to the United States in 1980 and continued a clinical practice. Ten years later, she began to lecture and train others on the orthopedic and sports uses of the ball.

Posner-Mayer founded Ball Dynamics International, Inc., in 1991, meeting the growing market demand she created through her teaching. She subsequently pioneered the use of the Swiss Balls in the fitness market through her second company, Fitball, Inc. Posner-Mayer has delivered lectures nationally and internationally. She also has created instructional videos and written books. She is a recipient of the Physical Therapy Alumni Achievement Award and received an honorary doctorate in humane letters from the University of Colorado.

As a first-generation college graduate and the daughter of a Holocaust survivor, Posner-Mayer has shown profound appreciation for CU and the Physical Therapy Program through generous support.  The Posner-Mayer Endowed Chair is made possible with generous commitments totaling more than $2 million.