Still Part of the Team

Minutes after the start of the 2010 showdown football game against Colorado State, a CU player lies on the field clutching his right knee.

He’s brought to the bench limping. Assistants ease him onto a table. And Dr. Eric McCarty goes to work.

McCarty, the team physician, gently examines the right leg of Parker Orms. More tests later will tell exactly what’s wrong—the big worry is ligament damage—but the promising freshman from Wheat Ridge, playing in his first college game, is done for the day. Orms leans against a table, ice pack wrapped around his knee, as teammates come by to embrace him and offer encouragement.

McCarty knows the frustration and pain of injury, and not just as a doctor.

In the 1980s he was a highly recruited high school football player from Boulder, then a linebacker and fullback for the Buffaloes. At 6’1” and 230 pounds he packed a wallop, but still got hurt—an ankle, a knee.

There was, however, a plus to that.

“I had a few little injuries in high school,” the soft-spoken McCarty says. “I got interested then in the human body. After the injuries in it really piqued my interest.”

That interest led him to medicine.

Today the CU medical school graduate is the football team physician and CU’s director of sports medicine. He’s also is an associate professor with the School of Medicine and team doc for CU skiing and soccer, as well as the University of Denver hockey squad.

“I love taking care of the teams,” McCarty says.

His former coach, Bill McCartney, says McCarty was special because he combined humility and drive.

“What you see is genuine,” McCartney says. “It’s all the time, not just because Eric’s having a good day. Eric was the ringleader. He influenced everybody. Everybody was proud to be associated with him.”

Beyond athletics, “McCarty was a phenomenal student,” the Boulder Daily Camera wrote in a profile, one of 10 National Football Foundation Hall of Fame scholar athletes as a college senior.

He’s quiet about his abilities. He mentions in one discussion that he was recruited out of high school by Stanford “and a few other schools.” You have to go to the newspaper archives to discover that those other schools included football powerhouses of Southern California and Michigan, with of Oregon and Arizona State lined up behind.

After graduating from CU in 1988, McCarty went to the CU medical school, completed a residency at Vanderbilt and then finished a fellowship in sports medicine and shoulder surgery at The Hospital for Special Surgery in New York City. In 1999 he joined the Vanderbilt University School of Medicine as an assistant professor in orthopedics and and took care of the teams. Four years later he returned to Colorado in his varied roles as teacher, clinician and sports-team doc.

During football season, he says, there may be a handful of injuries in each game. This fall has been no exception, with several players sidelined and quarterback Tyler Hansen possibly out for the season with a ruptured spleen.

“Players are bigger and stronger and faster today,” McCarty says. “The physics tells you there may be more injuries.”

On the field, McCarty, 45, heads his own team—various specialists ready to pitch in. Off the field too, they form a sports medicine practice with clinics in Boulder and Denver. He does rounds at of Colorado Hospital and researches which surgical and rehab approaches heal people fastest. One, for example, focuses on rehab from injury. In some he will a patient’s own plasma to extract proteins that promote healing.

If he had to pick just one joint to work on?

“The shoulder,” says McCarty, a board-certified orthopedic surgeon, “because it’s complex”—the teres minor working with other muscles large and small, the balanced mechanics of that ball and socket, the sometimes-pesky rotator cuff. But he’s involved in treatment and research of every body part that gets tweaked, strained and He’s involved right now in an ACL survey outcomes study. 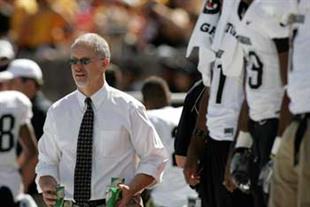 He tracks the sports-injury trends. For young baseball pitchers, shoulder and elbow injuries have increased fivefold in the last 10 years. “They often will throw too much without adequate rest to allow their young bodies to recuperate,” McCarty told The Denver Post in a 2010 interview. “You've really got to shut kids down when they have a problem.”

In football, concussions are a growing concern and McCarty preaches greater awareness by players and coaches.

In the September game against the CSU Rams, Orms is the only CU player to need serious attention. It was an odd injury because it wasn’t caused by an opposing player. Defending a kickoff return, “I made one little cut and part of my leg went one way and part went the other way,” the player told the Post later.

The rest of the game McCarty prowls the sidelines, encouraging the players and draping towels drenched in ice water over sweaty necks. He’s the only one on the sidelines looking formal, in a white shirt, black CU tie and tan slacks.

As the game winds down, McCarty nods toward the scoreboard. “We’re just going to run out the clock he says.” CU wins it, 24-3.

McCarty, thinner now than in his playing days, stands among the celebrating players. He knows their stories—knows Orms, for example, is a top prospect whose older brother plays quarterback for the University of Northern Colorado, knows the tough stuff these young men go through.

But one look at his face tells you he also knows the joy of being out there with a game on the line.

So would he like to get back out there in a uniform? McCarty gazes across the field. “Yeah,” the CU team doctor says with a smile. “But then reality sets in.”

Read former CU coach Bill McCartney's account of Eric McCarty, who he describes as a player with a perfect   combination of humility and "fresh fire."