Bridging the Gap of Immigrants to Denver 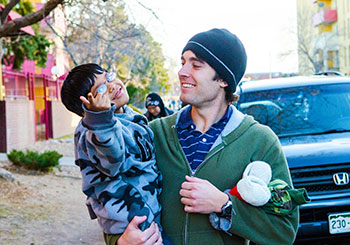 (May 2014) On a windy spring day near East Colfax Avenue in Denver, Derek Enns passes a small girl in a purple flowered skirt who giggles a quick “Hello Derek” before dashing into a sprawling set of low apartment buildings where many recent immigrants from Asia and Africa live.

At a nearby playground, boys swarm around Enns, begging him to throw a green-winged football. They give chase when he lobs it long and high.

“They usually take over from here,” he says, ocean-blue eyes sparkling.

Enns, a second-year CU physical therapy (PT) student, is at home here—as he should be. He shares a one-bedroom basement apartment with three roommates: two from Myanmar, also known as Burma, and one from Rwanda.

“I was a little surprised when he said he wanted to live in the community,” says Frank Anello, executive director of Project Worthmore, where Enns is a volunteer. “But that’s Derek.”

Enns arrived in Denver two years ago with a reputation, Anello says.

While volunteering with Partners Relief and Development on the Thai-Myanmar border the previous year, he lived in a home that had no furniture, mattress or basic comforts.

“He didn’t care about those things,” Anello says. “He wanted to be there and to be present and help the community.”

Most of his work in Myanmar involved health and took place at a village near a rebel army base.

“Sometimes we’d have to sneak past the Thai border patrols and walk through land mine territory,” Enns says. “But that sounds more exciting than it actually was.”

He trained local health workers on basics, like how to read English labels on medicine. The camps were clean and comfortable, but many residents had physical and psychological injuries as a result of the decades-old civil war. “Maybe I’m biased but I really liked the people,” he says.

The Denver area’s large Burmese population is what drew 29-year-old Enns to Colorado. He knew he wanted to work with immigrants while in graduate school and keep up his Chinese and Thai language skills. For a while, he considered becoming a physician assistant.

“I was trying to figure out how I could be useful. Then I stumbled upon PT and realized it would be very helpful in a third-world setting. You don’t need much equipment; you don’t need medicine. In areas where surgeries aren’t really available, PT can do a lot to maximize function and minimize pain.”

Until he graduates in 2015, he plans to stay in the community, where he is often a new family’s initial contact. 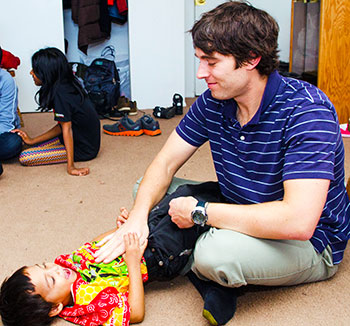 “We try to bridge the gap when they first get here and make sure they’re not starving to death or walking to school in flip-flops through the snow.”

No detail is too small. On that windy spring afternoon, he sat on the floor of a basement apartment occupied by a Burmese family that had arrived in Denver from Malaysia less than two weeks earlier. With half a dozen children wheeling around trying to get his attention — one little guy insisted on shoving smashed Pringles into Enns’ mouth — he quizzed the new family about their needs.

One of the children is old enough to have started school. Does he have a backpack? No. Paper, pencil? No. Enns pulls out a small piece of paper and a pen and writes down what they need. Do they have bus passes? Has the father signed up for English classes? Do they know how to use the washing machine? Do they have quarters? Do they have soap? No, no, no, no, no.

And how about Sophia, he says, nodding to a small girl with big eyes and short black hair. How old is she? The family does the math. Five. Old enough for kindergarten, he says, jotting that down.

Then he asks something, not in English, and everyone nods: Do you have bedbugs? “That’s one of the things I can say in Burmese,” he says, sympathetic; he’s had them twice. They strategize how to get rid of them.

Despite the demands on his time and energy, Enns says he’s never regretted his decision to live here.

“You make friends really fast,” he says. “I knew that if I lived further away it would be more inconvenient to get all the way across town to see people. Like last night, I didn’t feel like going out, so I went up to some friends’ place on the third floor and hung out. It feels more natural. A lot of the problems in the community are solved less than by us dumping money and more by friendship and relationship."

By living among the immigrants, he can also keep an eye out for trouble. Neighborhood schools suffer from crime and gang influence. 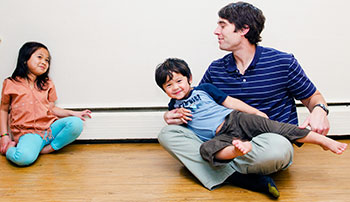 “East Colfax is the only thing they experience and it’s not beneficial for most of them. The parents don’t know how to deal with it so we’re trying our best to tell them what to expect, how to keep kids out of these situations. The parents are very much out of their comfort zone. It’s sad because most of the parents didn’t move here for themselves; they did it for the kids.”

Enns does what he can to help, Anello says, including saving up money to take kids and their families on field trips.

“Derek will take them to the movies, or up to the mountains or ice skating. He took them to an Avalanche hockey game. On the Fourth of July he took a bunch downtown to the courthouse to watch the fireworks.

“Certain people have the heart and compassion to serve others. But I’ve never met anyone who does as much as Derek does.”

See a 9News video of Derek Enns, who was awarded a 9Who Cares award.​