'Do you want to lose your feet?' 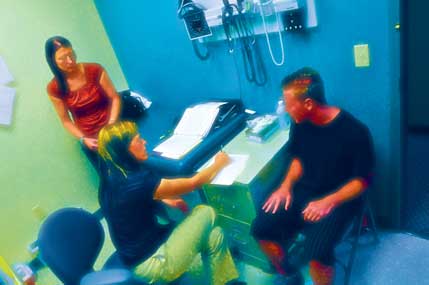 Gilroy, savvy in the sometimes tricky world of adolescent medicine, is known for not backing down when it comes to her patients, even the most difficult ones— especially the most difficult ones. On this day she had pushed to convince the troubled young man the stakes were high if he continued to ignore his Type I diabetes.

"I don’t want to have diabetes," he bellowed.

Gilroy stood, planning an escape route while trying to salvage a treatment plan. She changed tactics and gently laid a hand on his arm. "Let’s take a walk," she suggested. As they strolled the hallways of the shelter they talked about things he could do to feel better. the young man agreed to take his medicine at least for that day, and probably the next—possibly even the day after that.

Medical breakthroughs come in all sizes. 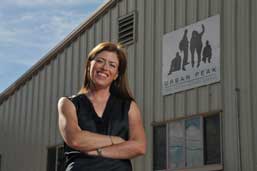 As Gilroy, now 42, first entered medicine 14 years ago and was sorting out specialties, she was surprised and saddened to discover how underserved adolescents were.

It is a group that roughly spans age 10 to early 20s. Debbie Trueblood, executive director of the Society for Adolescent Health and Medicine, explains that young children go to the doctor because their parents take them. Adults go to the doctor when they are sick. Teens often just don’t go because they feel uncomfortable.

Adolescent medicine is a relatively new subspecialty that remains small. There are only 1,200 members in Trueblood’s organization. One of the largest issues facing doctors is balancing a teen or young adult’s craving for privacy with their parents’ desire to know about treatment.

Another issue is the perception that teenagers will be difficult to treat, either because they will not be forthcoming or will not listen to , Gilroy says. Popular culture furthers the idea that teens are trouble.

"I love these kids," she says. "The health challenges are so huge. I want more people to understand that they are actually a joy. I want people to be happy to see a 14-year-old walk into their office."

Gilroy felt an immediate kinship working with teenagers and young adults even as other doctors advised her against it. Maybe it was because as a young doctor she wasn’t that far from the age group herself. Or maybe it was because she empathized with the misunderstood.

"She identifies with where they are coming from because she had kind of adolescence herself. She was picked on for being so smart," her sister, Melanie Gilroy, says.

If adolescents are, as many experts say, the most medically underserved population in this country, Gilroy has chosen to work with the most underserved of the underserved—those whose worlds are often ruled by violence, drug and alcohol abuse, and parenthood that comes much too early.

"These are the ones who have fallen through every single crack," she says.

Gilroy grew up the oldest of three children surrounded by upper-middle-class privilege in Seattle. She graduated from the University of California in San Diego with a degree in biochemistry. She went to medical school at Georgetown University and did her residency at what was then the University of Colorado Health Sciences Center.

The plan was to go into pulmonary medicine, but Gilroy couldn’t bring herself to fill out the application for a fellowship. She literally got sick to her stomach when she thought about it. At the same time, Health One Alliance, now Colorado Health Foundation, was hiring faculty for internal medicine. It would be her job to develop new curriculum in adolescent health. "I realized there were so many areas where I could make improvements," she remembers.

But it was the kids themselves who truly captured her. One moment she was treating a gunshot wound, the next she was talking about the challenges of puberty. "The breadth of the experiences was just crazy. That was probably the biggest hook," she says.

Dr. Julie Rifkin, her first attending physician when she left medical school, remembers how Gilroy would buy Tylenol or other over-the-counter medications from her own pocket if she thought her patients could not afford them.

Today Gilroy splits her time between Urban Peak, High Street Primary Care Center, the Englewood School District Clinica Tepeyac. She also is an associate professor at the University of Colorado School of Medicine, where she teaches adolescent medicine. She was named a Top Doctor by 5280  four times and received the Community Service and Volunteerism award from the Colorado American College of Physicians.

While Gilroy appreciates the accolades, she finds such attention "embarrassing" and notes that she is compensated for her work.

At her core she is a pragmatist, emphasizing evidence-based care. She is not one to entertain grand visions of saving every patient. She also doesn’t try to talk "street" or affect hipness because kids see through that in an instant. Instead, she figures if she can help one teen or young adult make one good decision on one day—like using birth control—she has done her job and done it well.

But should a girl refuse birth control, Gilroy matter-of-factly gives her prenatal vitamins. Pregnancy, she tells reluctant patients, is not a matter of if, it’s a matter of when.

The mother of three small children, she finds the teen mothers the most heartbreaking. "I don’t think it was as hard until I was a mother. I see the whole future for them. It’s just one more kid condemned to poverty and violence."

Sometimes, though, she is wrong.

She still remembers the teenage girl, already battling anorexia and cocaine addiction, who insisted she did not need birth control because she hadn’t gotten pregnant yet. Sure enough, a few months later, the girl showed up pregnant. When Gilroy gave her the news the girl ran from the office and disappeared.

Four years later she stopped by to visit. She was off drugs, married, had earned a GED, had a job and was the mother of two healthy children. She said the shock of her pregnancy diagnosis forced her to take stock of her life and make it better.

"I just wanted to let you know I was OK," the young woman told Gilroy.