(May 2015) Greg Higgins, MD ’78, thinks he may have at last found his place in the world 31 years after he graduated from the CU School of Medicine.

In 2009 in a rural orphanage under the shadow of Kilimanjaro in Tanzania, Africa, where Higgins had just become its doctor, a little girl named Neema was suffering from impetigo, a bacterial skin condition. For such a small child, Neema put up a mighty fight as Higgins held her down to clean and tend to her sores. 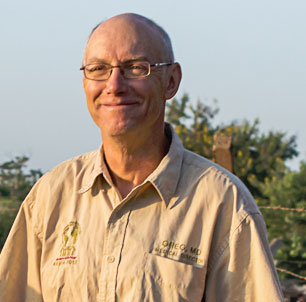 With treatment complete, the little girl climbed into Higgins’ lap, snuggled against his shoulder and fell promptly asleep. “She forgave me,” he remembers and that’s when he knew.

Today, at age 66, he feels he has finally found and a calling that is countless frequent flier miles from where he started as a young medical student in Colorado.

“If you have some vague idea you are going to save the world, you’re in trouble,” he says. “The world isn’t interested in being saved. But on any given day you can accomplish something. You have to commit to the microcosm.”

He sees now that the personal touch is enough.

Higgins grew up in Akron, Ohio, where found inspiration in Thomas Dooley III, a U.S. Navy physician and humanitarian who devoted his life to helping the poor and the sick in Southeast Asia. “It planted a seed,” Higgins recalls.

Drafted during the Vietnam War, Higgins was sent by the U.S. Air Force to Japan and Alaska where he caught the mountain-climbing bug. He attended college in Alaska and thought he might want to be a nurse until an advisor said he should consider medical school.

Higgins made his way to the University of Colorado School of Medicine, graduating in 1978. Around that time, during a trekking vacation to he was struck by the terrible need for medical care in that part of the world. For six months he worked as the chief medical officer at the Dali Lama’s hospital in India.

He returned to Alaska—in time to catch the climbing season—and began work at a small family practice in Seward.

Then it was off to California where he continued to practice family medicine, but something didn’t feel quite right. “I was looking for my niche,” he says, “Emotionally I wasn’t the right person to do that because I couldn’t let go. I lived at the hospital.”

Higgins worked for Valley Emergency Physicians for 15 years, helping to set up emergency rooms for small hospitals in California. He moved into management. “I liked the mission. There were a lot of hospitals who would not have an ER without our company.”

But he kept wondering if there was something more, something different waiting. “I wanted to do other things but I just didn’t know what. You begin to realize you don’t want more money. You want more time.”

So he retired in 2003 and eventually moved back to Alaska. From there he began to do volunteer medical trips in Africa. In 2007 he was asked by his town’s high school to take a group of students on a climbing expedition to Mount Kilimanjaro. On that he met a guide who was running a preschool in Tanzania. There was also an orphanage: 30 kids, five rooms, no water, no electricity, open sewers.

Something clicked. For two years he kept returning until he could not stay away. “I went home and sold or put into storage all my stuff and moved to Africa,” he remembers.

There are now 60 kids at Kilimanjaro Orphanage Centre in Moshi, Tanzania, and 20 more in its daycare. Higgins, known as “Grandfather,” also helps manage two preschools with more than 200 children attending.

One of his first orders of business was to instill simple habits such as good hand washing. He jokes that his job was that of a sanitary engineer as he oversaw the installation of toilets and septic systems. All of the children attend Catholic school. “For the majority of these children the answer for their future is education,” he says.

In Tanzania today one-third of the country’s 46 million people are under 16. The AIDS epidemic has wiped out an entire generation, leaving a gaping hole in the demographics. Higgins hopes to help reestablish intergenerational bonds, linking parentless children with childless grandparents.

“We are trying to create a big family,” says Higgins, who met his wife, Shannon Ward, on another medical mission in 2011 in Uganda. The couple married in 2013 and now work together at the orphanage in Tanzania.

He knows he has led an unusual life. But it suits him. He figures we are all a sum of our parts. “I think this is my final chapter.