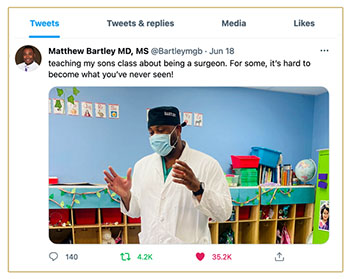 (October 2021) Matthew Bartley, MD, a resident in the Department of Surgery, was a viral sensation on Twitter after he tweeted a photo of himself visiting his 5-year-old son’s classroom in June.

The photo he posted spread first among his friends and coworkers, and then even further. It eventually garnered more than 35,000 likes.

“I was getting so many notifications, I had to turn off all the Twitter notifications on my phone,” Bartley says with a laugh.

Bartley previously had visited his son’s classroom and he also makes regular visits to local high schools. He says his goal is to inspire an interest in medicine as a career among young people, especially Black males.

“It’s hard to become something you’ve never seen, which is what I wrote on my Twitter post,” says Bartley, a general surgery resident who attended the University of Missouri-Columbia School of Medicine.

“I think it gives them that spark they need to say, ‘Yes, you can do this.’ Here’s somebody who’s done it who’s not very different from you,” he says. “It’s more important to do it when they’re younger, so they really have the idea and mindset that it’s something they want to do. It’s easy once you get into high school, and even college, to have people discourage you and choose something else. If you get it in your head when you’re really young — young people are driven, and they do what they want to do no matter what people say.”