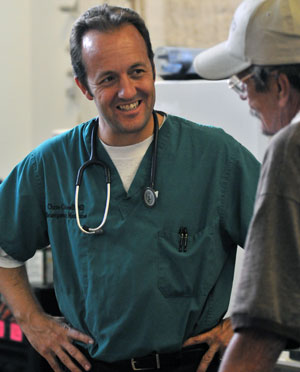 (November 2012) The first guest of the evening is a thin middle-aged man wearing a torn white T-shirt who greets students like old friends and asks for vitamin packs for himself and his girlfriend.

By the time he leaves a few minutes later, he’s asked about adding fiber to his diet (“Fruits and vegetables? No, man, it’s got to be quick”), gotten advice on foot calluses (“I tried wrapping them in duct tape but it didn’t work”) and is offered cream for a problem he’s whispered into Dr. Christopher Colwell’s ear (Don’t be embarrassed, Colwell counsels, “We see it all the time”)

s Thursday night at the Broadway Assistance Center west of downtown Denver. That means a free meal, clothing, groceries toiletries. Plus, you can talk about your health concerns with CU medical students and a medical professional. Tonight the latter is Colwell, director of emergency services at Denver Health and a School of Medicine professor.

He’s also the founder of the health care portion of the center and greets all comers with an easy, upbeat manner. “How ya doing?” he shouts to those hovering at the threshold, waving them into the room

s are quick to caution that this is not a clinic, and the people who visit are not patients. This is more like triage, says fourth-year student Paul Cheung as he checks supplies before guests start arriving. It’s a preliminary step before seeing a doctor—or maybe avoiding it altogether if a problem is caught early enough, says another fourth-year, Jason Yost

t guests come in looking for a specific item; a lot of ibuprofen and acetaminophen go through the door. Almost everyone leaves with a pack of vitamins. Cough drops are popular

l started the endeavor about 10 years ago when he and his wife signed up to help serve meals. But the director steered him toward providing some sort of medical know-how for her guests, most of whom have no health coverage.

“She said handing out food is wonderful, but ‘We have plenty of people to do that.’”

At he and his wife, a paramedic, provided all the services, but later he began searching for assistance. He knew a medical student, who knew others, and soon the Broadway Assistance Center Health Resource Center was born. It’s not an official student but is run by fourth years who hand it off to their succeeding younger class each year

between 45 and 75 visitors come each week; many are regulars. 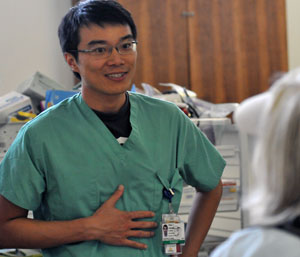 “They simply want to check in because we know them and know the state of their health,” says Eric Brown, a fourth-year student who estimated that they recommend someone go directly to Denver Health about every two weeks for a serious condition.

Through donations and a small grant, the group fills a large vertical cart with bins of medicines labeled Skin, Feet, Dental, Musculoskeletal, etc

s easy to run out of popular items. On this Thursday it was glucosamine, eye drops, pregnancy kits and reading glasses

t students like the idea of spending as much time as they want with guests.

“When you work for a preceptor you’re in and out in 10 minutes; you don’t get to talk to the patient about their life,” Brown says. “You can’t ask things like ‘Are you taking vitamins, eating vegetables?’”

Many guests hang around to talk. One man tells the students about meeting his father for the first time, while a woman talks to Cheung about male menopause. Another man shows scars from stabbings and a run-in with a train.

“Some don’t have much opportunity for conversation the rest of the week,” Colwell says. “Many of the same ones come in week in and week out. We let them talk, and that might do as much good as helping them with their medical problems.”