Major investment in research program leads to breakthroughs and partnerships

Six years ago, the University of Colorado School of Medicine made a major investment in an RNA research program that has resulted in a growing community of scientists working together to investigate the ways RNA is entangled with human health.

The RNA Bioscience Initiative, or RBI, was established with $20 million in funding from the Dean’s Office and private philanthropy to cultivate a program that would have a transformational impact on the CU Anschutz Medical Campus.

The return on that investment – in scientific achievements by members of the CU School of Medicine community, in support for collaborative research, in new extramural funding awarded to the campus – has been significant.

The creation of the RBI has resulted in multiple faculty recruitments, enhanced training for fellows, new and expanded collaborations, publication of more than 100 articles in scholarly journals, and support for scientists who have received more than $56.5 million in grant awards.

“When we directed support to RNA research, we knew it was a major investment in the future of medicine and science,” says CU School of Medicine Dean John J. Reilly, Jr., MD. “What we didn’t know was that the whole world would soon realize how important RNA research was.”

The COVID pandemic awakened the world to the importance of understanding RNA because the most effective way to fight COVID is through vaccines built out of a type of RNA called messenger RNA, or mRNA.

The Pfizer and Moderna COVID-19 vaccines use modified mRNA to give the body’s cells instructions on how to make the spike protein found on the surface of the COVID-19 virus. By prompting cells to make this specific protein, your body then responds by creating antibodies. These antibodies then protect you if you are infected with the virus.

“Decades of research by scientists around the world allowed for developing a life-saving vaccine that could be delivered in record time,” Reilly says. “As traumatic and difficult as this pandemic has been, it would have been much worse if a previous generation of scientists had not invested their time and resources and expanded our knowledge of RNA.”

RNA, or ribonucleic acid, is a molecule that has a role in coding, decoding, regulating, and expressing genes. A strand of RNA triggers reactions propelling activity in a cell.

Understanding how a particular strand of RNA does what it does is extraordinarily complex. Such investigative work is laborious, complicated, painstaking, winding, always surprising, and never easy. The work requires highly sophisticated technology taking precise measurements, resulting in massive amounts of data.

All those bundles of information are useless, though, without people. It takes people to do the work, to figure out how to frame the study, to interpret what the machines are capturing, and to respond to the new questions that those images raise.

One of the most powerful contributions that RBI has made to the campus is to train, hire, and recruit people, especially investigators who have worked with RBI on some of their experiments.

“You can have a pie-in-the-sky plan where we’re going to invest in these big-ticket resources, but you’ve got to have boots on the ground,” says Bruce Appel, PhD, professor of pediatrics and head of the section of developmental biology. “You’ve got to have people integrated with the people who are trying to solve the problems.”

Appel is an investigator whose laboratory studies the genetic, molecular, and cellular basis of brain development and myelination. Myelin is a protective cover on nerve cells that allows electrical impulses to transmit quickly and efficiently along the nerve cells. His research has been continuously funded for more than 20 years by the National Institutes of Health and private philanthropic foundations. 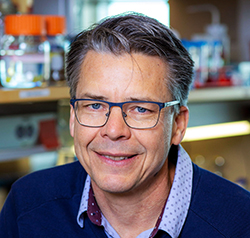 Appel and his team look at how the nervous system develops. They want to understand how neural progenitor cells become neurons and glia. Glial cells provide critical support functions for neurons, such as insulation, communication, and nutrient and waste transport.

“Where RBI has been particularly helpful to us is addressing the longest-running problem that I have worked on: How do neural progenitor cells get specified for different cell types, neurons and glia, particularly myelinating glia?” Appel says. “I have worked on this for a really long time. You would think that I would have solved this, and I have not. It’s been really hard, and this is true for everyone else in the field too. We were just stuck.”

It wasn’t for lack of trying. Rather, it’s that the tasks involved are extraordinarily difficult and the questions are not easy to resolve: How to differentiate the cell types? How to measure the distinctions between the types of cells? How to design the experiments so that you accomplish what you want to do? How to interpret the collected information?

“We could learn a lot about cells once you could identify them, once they have a feature you can see, either gene expression or morphology or electrophysiology or whatever,” Appel says, “but once you get into a population of cells, they all kind of look like each other.”

It turns out that looking at RNA is critical to get a handle on what’s happening, to be able to see the difference between cells.

“We do not generally consider ourselves as RNA-focused biologists,” Appel says. “RNA is just one of the many assays that we use. We use gene expression to identify different cell types and then we use gene expression to understand the effect of certain manipulations, usually genetic manipulations. We have ideas about how the nervous system develops that we wanted to test. Assessing RNA is both a marker and then also part of our tool kit to test gene functions.”

Along came the RBI with its pilot grants to help investigators who wanted to incorporate more RNA biology into their experiments. Appel and his team received $7,000 to fund two sequencing projects for his lab. RBI also provided support for the work of RBI fellows on interpreting the data.

“It’s just a treasure trove of things that will keep us busy for a very long time,” says Appel, who last year received an eight-year, $6.9 million Outstanding Investigator Award from the National Institute of Neurological Disorders and Stroke. “And this is only one application of many that we will use this resource for. I would say this has been truly transformative. I don’t like to throw that word around too much, but this has been transformative.

Riemondy was the first fellow in the program in 2016. He joined after earning his PhD at CU Boulder in the Department of Molecular, Cellular and Developmental Biology.

“I was considering either a traditional postdoc or potentially transitioning into industry,” Riemondy says. “And then I found the Informatics Fellows Program. I was immediately excited to apply for the program because I hadn’t seen anything like it out there on the job market.”

The RBI Informatics Fellows Program trains bioinformatics analysts in RNA biology and data analysis so that they can design, execute, and analyze the results of RNA sequencing experiments.

“The work we do requires an understanding of a lot of different disciplines,” Riemondy says. “You need to understand how to write algorithms that are efficient for both processing data and identifying biologically meaningful patterns in the data. Much of our work merges principles from computer science, statistics, and data science with biology. However, if you don’t understand the biology and the various biological systems the investigators are working with, it becomes very hard to translate results into something they can interpret and use.”

Since the program was established, RBI Informatics Fellows have initiated 180 projects with 118 investigators. They have completed97 of those projects, contributed to 46 publications, and provided analyses that have been used to support multiple National Institutes of Health and other grant applications.

Beth Tamburini, PhD, associate professor of medicine in the Division of Gastroenterology and Hepatology with a secondary appointment in the Department of Immunology and Microbiology, worked with the RBI team to figure out how to trace an antigen’s path in the body.

Tamburini and her lab team wanted to understand how long antigens reside in the lymph node. In this case, the antigen is a foreign protein to which an immune response is generated. An improved understanding of how long and where protein antigens reside in lymph nodes informs developing therapies that could combat infections and disease that can cause illness and death.

Lymph nodes are like pit stops in the lymphatic network where immune surveillance occurs. When pathogens, such as viruses or bacteria, or other foreign material like vaccines, enter the body, small proteins and pathogens can be swept into the lymph nodes. Cells in the lymph node see the foreign substance and activate the immune response intended to protect the body from these invaders.

After the infection and clearing process, a small number of antigenic proteins remain in the lymph nodes inside the lymphatic endothelial cells. This function of retaining antigens is important for instructing the immune system to respond more quickly and stronger the next time it encounters the same antigenic protein that came from the pathogen or vaccine.

Tamburini had attended a seminar organized by the RBI where a company that designs and makes gene sequencing technology presented a method of tagging other types of proteins in a petri dish. The technology was designed to tag an antibody after it was outside of the host.

“Somewhere in there, it came to my mind, ‘Well, if you could do that with an antibody, can’t we just tag our protein, our antigen, directly and put it into the mouse?’” Tamburini says.

In early experiments, the tag would rapidly degrade after injection. And that’s where the expertise of the RBI was called into action.

Tamburini’s team worked with the co-director of the RBI, Jay Hesselberth, PhD, associate professor of biochemistry and molecular genetics, and his laboratory, to develop tags that could survive along with the antigenic proteins to which they were attached.

Tamburini competed for a pilot grant from the RBI. She also was named an Outstanding Early Career Scholar by the Department of Medicine, an award that was supported with a contribution from the RBI. With that support, she was christened an RBI Clinical Scholar. She and her team went to work with RBI Fellows in collaboration with Hesselberth.

Tamburini and her colleagues described their research in an April 2021 article in the journal eLife. Among the co-authors/collaborators were Hesselberth and RBI fellows Ryan Sheridan, PhD, and Rui Fu, PhD.

The eLife summary accompanying the article explains the importance of the study by Tamburini and the RBI:

“These results provide important insights into the protein archiving system that is involved in enhancing immune memory. This may help guide the development of new vaccination strategies that can manipulate how proteins are archived to establish more durable immune protection. The biological tags developed could also be used to track therapeutic proteins, allowing scientist to determine how long cancer drugs, antibody therapies or COVID-19 anti-viral agents remain in the body. This information could then be used by doctors to plan specific and personalized treatment timetables for patients.”