Success for Strokes and Other Quality Improvement Projects 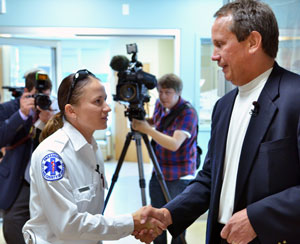 Lucky, as it turned out, for Hamilton.

So Cumbler and a University of Colorado Hospital (UCH) multidisciplinary team, which included a medical student, began to work on cutting the stroke treatment time—“door to needle” in stroke talk—to less than an hour. The result was an award-winning success.

“When we say the project cut a half hour off of stroke treatment time, that means there’s a patient who didn’t lose 57 million neurons,” says , an associate professor of medicine at the CU School of Medicine. “Quality improvement processes are invisible but the impact is on real patients.”

It gets no more real than Hamilton.

A salesman who lives in southern Illinois, he had a stroke on Halloween, 2011, on a flight from St. Louis to Salt Lake City. His airplane detoured to Denver. Paramedics were waiting for the plane. They rushed him to UCH, which recently had been putting the stroke-treatment plan into action.

The hospital was ready. Rick Hamilton's door-to-door needle time, the point at which the clot buster, tissue plasminogen activator (tPA), was administered was 18 minutes.

That’s exceptional but the trend is unmistakable. UCH used to hover at about 87 minutes’ treatment time. Now the average is about 40.

Cumbler loves the math of it. In a three-month stretch, he notes, 570 million neurons were saved.

The stroke project is an example of the many efforts going on at the Anschutz Medical Campus that come under the heading Quality Improvement (QI). UCH and Children’s Hospital Colorado have their own projects and the School of Medicine is leading a campus-wide effort to make clinical care more effective and efficient.

Along with the UCH stroke effort, two examples from Children’s (NICU Improvements, Breaking the Code) are part of this report—dramatic reductions in codes called outside the intensive care unit and in central line infections.

Success, judging by these case studies from the two hospitals, often lies in basics. Teamwork between disciplines is a constant factor for success. So are inclusion and shared responsibility, vigilance regarding data and even little touches such as a Walmart stopwatch or a packet of candy as a reward.

And at a deeper level, improvement appears to be the result of a culture shift, a belief that doctors, other health care professionals hospitals as institutions should aim high and reject the status quo.

“Part of it is a mindset that says a lot of harm that occurs in hospitals is preventable. Let’s reduce it,” says Dan Hyman, MD, quality officer at Children’s.

Training, too, is part of the plan.

Key players on the Anschutz Medical Campus have teamed up to create the Institute for Healthcare Quality, Safety and Efficiency (IHQSE) to improve clinical and educational aspects of patient safety.

“The institute is an imperative step in our clinical transformation,” says Jeff Glasheen, MD, who as part of this effort was named associate dean for clinical affairs for quality and safety. (Read about the institute at medschool.ucdenver.edu/CUMedToday/Feature.)

The stroke treatment initiative got its start in 2006 when a patient of Cumbler’s suffered a stroke.

“I got the overwhelming sense that the system then wasn’t working like the well-oiled machine it needed to be,” he says. “The time elapsed before evaluation was the issue.”

That led to a series of projects including of a stroke rapid response team to go anywhere within the hospital. Improvements followed, Cumbler says, such as reducing the stroke evaluation time outside of the Emergency Department (ED) from 271 minutes to just over an hour. But the ED time was less than half an hour.

there was room to do better.

“We wanted to redesign the system to make sure the unreliable became reliable and previously slow steps could be completed rapidly,” Cumbler recalls. “We restructured the system for in-hospital stroke until evaluation times were comparable no matter where in the hospital you were having stroke symptoms, from the ED to the general wards.”

The Society of Hospital Medicine awarded the in-hospital stroke project its 2012 national quality improvement award. The hospital QI team then applied those same tools to the entire process, from the 911 call for stroke to delivery of clot-busting medicine in the ED.

The process was data-driven and laborious—in a good way. Nearly a dozen members of the stroke QI team mapped every step in the stroke-treatment process by watching and interviewing everyone who “touched” the patient.

When the team broke it down they saw that for treatment in the first hour, a stroke patient in the ED would require coordination of at least 13 people from seven departments. There was a lot to figure out but also a lot of places to save time without crimping safety.

Pharmacy, for example, didn’t always know a stroke patient was going to need the clot-busting medicine until late in the process.

“We gave them one of the stroke team pagers so they would get that alert from the beginning,” Cumbler says. “They were brought into the stroke team. A person who was a participant becomes a teammate.”

The team devised ways to get patients through Radiology faster. They found an imaging protocol that typically gobbled up a big chunk of the first hour but did not appear to affect outcomes. It was jettisoned. They tried to create an environment of healthy competition. Best treatment times were posted for all to see.

The team even made it simpler to call a stroke alert, saving more time, and tightened the criteria for when an alert should be called, focusing effort where it was needed.

The UCH team also assigned Hudak to hunt for hospitals that treated strokes quickly and ask how they did it. Their success is called “positive deviance” in QI lingo; they’re different because they’re better.

Those other hospitals told Hudak they did not do elaborate brain imaging first. Most did point-of-care lab testing or none at all, rather than send blood to the lab. Most of the hospitals also relied on interdepartmental teamwork, accountability and friendly competition, approaches the stroke team embraced.

“We thought, how do we apply those concepts to build on existing culture,” Cumbler says. “Some changes were a little uncomfortable. But we could say in response that we talked to the best-performing hospitals.”

Hudak threw herself into the stroke project, a student pushing different UCH departments and personnel to get with the new stroke program.

“I sure learned how a hospital works,” she says with a laugh. “I was a pain. I was always around, explaining the new rules.”

The QI team got buy-in for those new rules. The hospital began its new stroke approach over the summer of 2011.

And, briefly, things got worse.

“We had a stable process and then we destabilized it,” Cumbler explains. “But we stuck with it and continued to make changes. And then we reached a tipping point. I think that happened because the system got used to the new process. Suddenly the times changed for the better.”

The tipping point has a name: Rick Hamilton. His 18 minutes, on top of already improving times, was an aberration but a clear marker that the new system worked. More his case demonstrated what was possible.

The success has proved to be durable. The American Stroke Association recognized the University of Colorado Hospital as one of the Target Stroke Honor Roll hospitals. Hudak, the student, has given presentations nationally on the work.

“We were able to create a culture shift to include every person who is involved in caring for an acute stroke patient,” says Alexandra Graves, a nurse practitioner in the Department of Neurosurgery and clinical director of the Stroke Service. “They all feel a part of the team. Whether you are the person greeting the patient in Emergency or the neurologist ordering the medication, everyone’s role is important and to treating in 60 minutes or less.”

But the achievements raise a question. With stroke treatment time, how low can you go without cutting corners as well as time?

Not all time treating a stroke victim is wasted. A doctor wants a good history. You don’t want to rule out all testing. You want to root out unintended consequences (the QI team is looking at that).

As for the 18-minute patient, Hamilton has since learned that he benefitted from a systemic change in the hospital’s procedures. But he knows something else too.

Hamilton sells banking software; he’s familiar with introducing new systems and knows they’re only as good as the people who use them.

“When I was in the hospital I was struck by the personal nature of the care I was getting. From the nurses to the physicians, they were compassionate and empathetic. You felt like they truly cared,” says Hamilton, who returned to UCH last summer to thank his care team with words and cookies.

“You can put in the processes but if you don’t have the right people, all those can fall apart quickly.”