'There's Love In That Room' 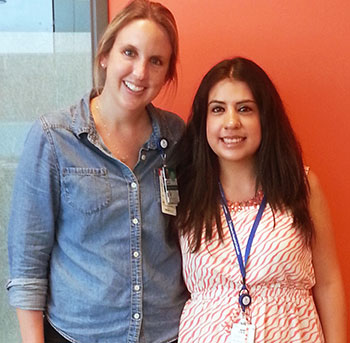 (November 2016) Chisom Agbim knew as a student at Aurora’s Hinkley High School that she wanted to become a doctor. Now a graduate of CU School of Medicine and a resident at Stanford University’s Lucile Packard Children’s Hospital, she says she often thinks about the people who helped her succeed.

In a cubicle covered with photos of family and friends at Children’s Hospital Colorado, Genesis Sanchez Ortega files and sorts for a Special Care Clinic. She’s pleased to work at a hospital where physicians who once provided her pediatric care can see her succeed professionally.

One floor down, Daniel Hitchcock works in a room crowded with medical professionals who count on him to keep faxes moving, answer phones and enter computer data.

All three are graduates of Children’s Hospital Colorado Launch Programs, which identify, train and employ community members from under-represented groups.

“We see these programs as an opportunity to mine for great talent right in our own ,” says Programs Manager Stacey Whiteside, MSW.

Agbim had already been volunteering at Denver area hospitals but entering the MC² in her junior year of high school gave her the patient contact and clinical experience she wanted.

“I think it was one of the most crucial experiences I had prior to starting my career,” she says.

MC² began recruiting high school students interested in careers in health care in 1999, when it partnered with Manual High School. Now accepting students from around the metro area, the two-year program offers hands-on experience, including paid internships, field trips, workshops, mentorship, career guidance and other services for students from under-represented and socio-economically disadvantaged backgrounds. About 600 students have gone through the program. Three hundred students apply annually, and the 30 who are accepted are high-achieving: 100 percent graduate high school and 75 percent enter pre-health programs. This year the program expanded to Denver Health, which accepted 20 interns.

“A more diverse workforce is a stronger workforce,” Whiteside says, citing the Sullivan Commission Report on Diversity in the Healthcare Workforce and other studies. “Research shows that there are better outcomes all around when patients and families have providers that come from their own community.”

She has seen non-English-speaking patients warm up to high school interns who speak their language.

“It happens with 80 percent of the students. They can say, ‘I live in your neighborhood,’ or ‘I go to your church’ or ‘My mom is from Vietnam, too.’ It’s so powerful to watch it happen.” 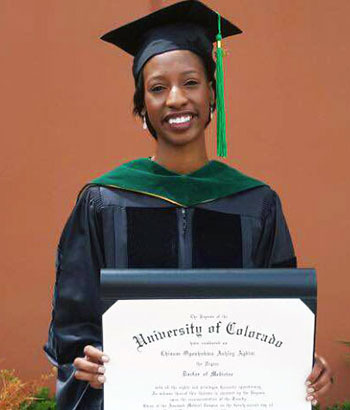 “These tracks represent large areas of our workforce,” Whiteside says. “By pipelining students into these areas we have the chance to create teams that better represent the demographics of the communities we serve.”

Agbim says the program is important to students who are under-represented in health care. While in high school, some mentors encouraged her to pursue a medical career, but others cautioned against it, saying the training took too many years to complete.

She remembers a day during her MC² internship when she watched emergency department providers try to save the life of a drowning victim.

“I had been taking the idea of what doctors do from TV, but this was a teaching point. With that job comes a lot of responsibility, but also an incredible amount of support from the rest of the staff. Seeing that first-hand really taught me what being a doctor would be like.”

She has already noticed the effect an African-American doctor can have on patients and families.

“Some of them have told me that they want to go into medicine because they see someone like me and they know it’s possible.”

An unexpected benefit to employing people with disabilities at Children’s Hospital Colorado is the hope it inspires in others, Launch Programs Coordinator Haley Couch says.

“Our internal colleagues value these workers, but so do the families who come to our hospital,” she says. “Some of them are struggling with a diagnosis for their child, and then they see someone with a similar disability working and contributing in a meaningful and constructive way. I think it gives them renewed hope.” 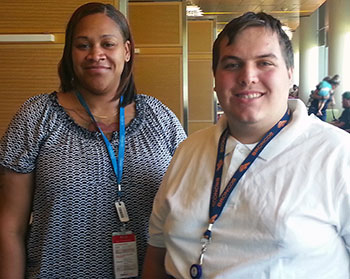 Founded by Cincinnati Children’s Hospital Medical Center, Project SEARCH is a transition program for high school students with significant physical and/or intellectual disabilities. During the internship, which lasts an academic year, students are immersed in the hospital, and receive both workplace and life skills training. Many find work in clinical settings, but some have found employment in food service, hospitality, child care and other areas.

Of the 49 graduates since 2009, 80 percent found jobs immediately following the program. About 35 percent have earned positions at Children’s Hospital Colorado.

“We learned how to keep a job, how to budget our salary, how to dress casually,” Hitchcock says. He was surprised that training included fun activities. “We went to a Rockies game, alumni parties, a day at Dave and Busters.”

Ortega says the training “taught me how to interview, how to ride a bus. I had never been on a bus before. I feel confident now.”

Both say their favorite part of the experience has been meeting new people and making friends.

“She’s a great member of the team,” Andrea Loasby, operations supervisor, says of Ortega. “We have given her more responsibility because she always wants to learn new things.”

Senior Medical Assistant Care Coordinator Cecelia Ross says Hitchcock is a fast worker who soon will be trained in Epic, the software program the hospital uses to track patient care.

“He came in and just worked hard,” Ross say. “He’s a perfect fit and a real go-getter.”

Hitchcock loves his job, though he notes that the clinic office is crowded. Ross argues that makes the office better.

“There’s love in that room,” she says.