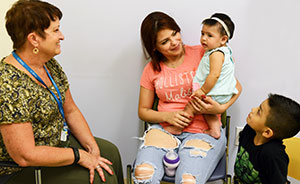 (December 2015) When pregnant young women enter the Colorado Adolescent Maternity Program clinic (CAMP), they don’t have to worry about how their swelling bellies will be perceived.

“This is a no-judgment zone,” said CAMP Co-director Stephen Scott, MD, associate professor of obstetrics and gynecology and pediatrics at the University of Colorado School of Medicine. “We emphasize a environment and an environment based on trust.”

The 25-year-old program, a partnership between the School of Medicine and Children’s Hospital Colorado, treats pregnancy as much more than a medical event for young mothers.

“Our young women want to be good moms but don’t have a lot of , so we provide an obstetric medical home and bring other services together,” Scott says.

The first contact is always with a case coordinator, who also sees the young women at nearly every visit.

“We build rapport and trust; we’re not stuffy. I love getting to know them throughout their prenatal care,” says Lisa Wilcox, a CAMP case coordinator.

Because of the relationships they foster, case coordinators along with the social workers often pick up on issues that need to be addressed but might otherwise go unnoticed.

“In a traditional medical model, there is a hierarchy of positions and medical providers are expected to recognize problems and refer them out,” Scott says. “Here we flatten out the pyramid model, giving everyone an equal opportunity to see the patient and bring their expertise.”

Bringing baby into the fold

After delivery, the relationship with CAMP doesn’t end; it extends to the baby. CAMP offers primary care for mothers through age 22 and their children at their Young Mothers Clinic.

Case coordinators visit new moms before they are discharged from the hospital and bring diapers and a gift for the baby. They also schedule the first postpartum appointment right there in the room.

“We see mom and baby together allowing for twice the opportunity to interact,” Scott says. “Teens aren’t proactive about their health but we can improve that through multiple touch points.”

Kenia Perez was just 16 when she gave birth to Joshua, now 5, at University of Colorado Hospital. Though she didn’t know about CAMP before his birth, she was referred to their Young Mothers Clinic for his primary care. After moving to California, she returned to Colorado and to CAMP while pregnant with her second child.

“When I was pregnant with Isabella, I was scared to have two,” she says. “How was I going to start school? But CAMP helped me with everything.”

Drawing from years of research

Research is another key component of CAMP and has been since the program’s inception. Jeanelle Sheeder, , MSPH, associate professor of obstetrics and gynecology, is the program’s researcher. She has served in the role since CAMP began collecting data in 1991 and has since published more than 75 papers.

Studies have included weight gain in pregnancy to predict child outcomes, stress and depression, what types of contraceptives have or haven’t been used—everything from basic biological studies to psychosocial.

“This is going to really age me, but we started out with a DOS database,” she says. “Now we’re in the modern age and have a giant online data set. Participants now do surveys and assessments online or on iPads so we can monitor in real time.”

Sheeder says the data has clearly shown CAMP is successful, and now they’re building out other parts of the program.

One example is Pregnancy and Parenting Partners (P3). The biweekly group care takes 10 young women around the same gestational age from pregnancy through early infancy.

They participate in group medical visits, go through parenting classes and even learn how to check their baby’s heart rate.

Graduates of P3 have gone on to do well. Many continue their personal growth by coming back to other groups as peer mentors. In addition, the moms find support in each other.

Sheeder tears up when she talks about how one group of graduates planned a Halloween party complete with baby costumes. When one mom could not afford to buy a costume, the others chipped in to get one.

“It’s these unanticipated values that are so meaningful. It was so rewarding for these young women to be able to help,” she says.

There’s also a dedicated effort to ensure these moms don’t quickly become pregnant again. Through a partnership between Children’s Colorado and University of Colorado Division of Family Planning in the Department of Obstetrics and Gynecology, new moms are offered IUDs or implantable contraceptives before discharge. It has reduced the rate of second pregnancies within the first year after delivery dramatically. For those who initiated contraceptive implants prior to discharge, the rate was 2.6 percent compared to 18.6 percent in those who did not.

On the horizon is improving education for fathers and creating a program for successful co-parenting since 80 percent of CAMP participants are single parents.

“For me, I don’t even see the bad,” Sheeder says. “They all want to be good moms and we focus on helping them do that. If they need help with getting back into school, housing, co-parenting, we can help them with that.”

Perez says she’s been inspired by the care and encouragement she and her children have received at CAMP. She is living on her own and is seriously considering studying to become a nurse.

“I my own thing. I want to do nursing,” she says. “The [care team] gave me the info to help me take the first step. They seem to be happy for me and cheering me on.”