Epilepsy Patients' Use of Pot Prompts Calls for Research 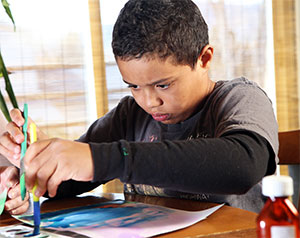 (May 2104) Edward Maa, MD, noticed a trend when his epilepsy patients responded to a questionnaire about the use of complementary and alternative medicine: Many were using marijuana.

Maa, assistant professor of neurology at the CU School of Medicine and chief of the Denver Health Comprehensive Epilepsy Program, was hoping to gather evidence to support acupuncture as a popular complementary treatment for epilepsy. Instead, he learned that the No. 1 alternative medicine used by his epilepsy patients was marijuana

s U.S.-based epilepsy questionnaires on complementary and alternative medicine had not included marijuana, because no states had legalized it. Now that medical marijuana is legal under Colorado law, Maa added it to his research survey. When it turned out to be the most popular complementary therapy among respondents, his interest was piqued.

“Thirty-four percent of my patients, unbeknownst to me, were using or had used marijuana to treat their epilepsy,” Maa says. “I was surprised.”

With Colorado’s evolving marijuana laws and policy, Maa and other scientists at the Anschutz Medical Campus are attempting to determine the benefits and risks of marijuana for some patients.

“A lot of our patients are using, so as a physician, I consider it my responsibility to educate myself on this subject,” he says. “I need to know the science behind the claims and the interactions with my seizure medications. If you’re afraid to address it, you may miss potential bad effects."

Because university physicians are not directly involved with approving patients for the state registry of those allowed to purchase medical marijuana, Maa contacted Margaret Gedde, MD, a doctor affiliated with the Realm of Caring, a nonprofit organization in Colorado Springs, Colo. The organization is recently famous for its “Charlotte’s Web” strain of cannabis, which has been used for children with severe epilepsy — such as Dravet syndrome, Lennox-Gastaut syndrome and Doose syndrome — and sparked a mini-migration to Colorado of families struggling with epilepsy.

With help, Maa queried the Realm of Caring database and found that 13 of 30 patients with epilepsy had three or more months of experience using Charlotte’s Web. Gedde contacted these patients and received demographic and seizure frequency data from 11 of them. Of those, eight reported a dramatic response to the marijuana treatment.

Maa and Gedde presented their findings at the American Epilepsy Society in December 2013. Due to its patient sample size and methodologies, the study and its results were not without controversy, Maa says.

“Given the conflict between federal and state views of marijuana, this was the best that could be done under the circumstances,” Maa says. “However, for some of these kids to have such a dramatic reduction of seizures is unbelievable. At the very least we need to get to the bottom of this reported effect. Maybe Charlotte’s Web is affecting the drug levels of the other medications, maybe it is a true effect, maybe it is wishful thinking on the part of the parent — either way, we should know.”

study of medical marijuana is because the U.S. Food and Drug Administration labels marijuana a “Schedule I” controlled substance rating, declaring it has no medicinal use.

“It’s a fascinating question worthy of if there weren’t the stigma,” he says. “With the legalization [in Colorado] of medical marijuana more than 10 years ago and the legalization of recreational marijuana starting this year, I hope physicians quickly engage in conversation [about marijuana] and that they educate themselves about it — because based on my survey, I suspect their patients are using it much more than they know.”

There are, however, those who suggest caution and express considerable concern about other effects of marijuana use. Classifying marijuana as a Schedule I drug, which ranks it among the “most dangerous” substances alongside heroin, LSD methamphetamine, makes research “nearly impossible,” says Amy Brooks-Kayal, MD, professor of pediatrics and neurology and co-director of the Translational Epilepsy Research Program at the School of Medicine. The American Epilepsy Society and the Epilepsy Foundation of America are strongly encouraging federal officials to change the schedule of marijuana to reduce barriers to research.

“We do know from basic science studies that marijuana derivatives can completely stop the cellular mechanisms of learning and memory,” says Brooks-Kayal, who is also vice president of the American Epilepsy Society. “And right now, I don’t know the benefits, I don’t know the likelihood it’s going to help, and I know nothing about the risks.”

The pediatric neurologists at of Colorado have seen more than 50 children who have received a marijuana derivative for of their epilepsy, and of these less than 25 percent have a reduction in seizures reported by parents. The pediatric neurologists also report they have seen no clear evidence of improvement on objective testing such as prolonged EEG.

At the same time, they report seeing potentially serious side effects including changes in levels of other medications, sedation and worsening seizures in some patients in association with marijuana derivatives.

“We also have no information about the potential long-term adverse effects on learning and memory in young children treated with marijuana products, and studies of adolescents who use marijuana recreationally suggest that this may be a very substantial concern,” Brooks-Kayal says. “We thus critically need well-controlled studies to better understand if these products are safe and effective for use in children or adults with epilepsy.”