The Closing of the Given Institute 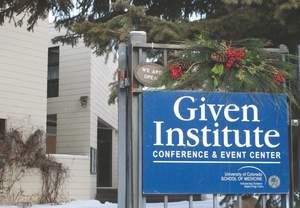 Events Manager Brian Payntar Harris said working as the Given’s conference and events manager for 10 years helped him stay ahead of scientific achievements.

“You get to hear about it six to eight months before it goes out on CNN – while it’s still being developed,” Harris said.

At times he’s been surprised by developments that appear to have happened right under his nose.

“I was watching the Discovery Channel one night, and they were talking to some Fermilab physicists from Chicago who said that they were at a conference in Aspen the past summer, and after attending a music concert, they came back and decided to work late into the night.

“They said there was a storm outside, and suddenly ‘There was a clap of thunder, and we realized we had what we were looking for’” – a breakthrough in the unified string theory.

“I can’t say for sure they were at the Given, but I would bet they were. They come here every year.”