Celebrating the History of Nurse Practitioners 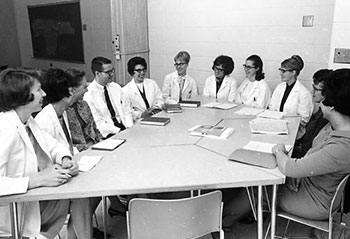 (May 2015)  Nurture an idea with care and perseverance and there’s no telling how it will flourish.

The profession has since blossomed and branched out to all corners of health care. In fact, according to Colorado Health Careers, nurse practitioner/clinical nurse specialist will be among the nation’s 10 fastest-growing occupations in the next decade

n CU’s nurse practitioner (NP) program launched in 1965, Time magazine dubbed the students a “new breed of .” Back then, nurse practitioners were on the front lines of health care in rural areas and gritty urban neighborhoods. They checked on babies’ health and provided vaccinations, health counseling and other disease prevention services in far-flung and underserved communities that struggled to attract physicians.

“You were the lone ranger out there,” Ford says. “You were the sanitarian, epidemiologist, the vital statistics office—everything. That was the basis for this (program). It was based on prevention and health promotion.”

Ford, EdD, FAAN, in the School of Nursing, as it was called then, and Silver, MD, in the School of Medicine, pushed for a vanguard nurse. Ford had a background in community health and well-child orientation, while Silver’s strength was in-depth clinical assessments and pediatric health

y Kempe, MD, then-chairman of the CU School of Medicine’s pediatrics department, saw complementary skill sets in the pair of educators, as well as determination that would be needed to establish their innovative idea of empowering and expanding the role of nurses.

“What we were doing mainly was advancing the public health nurses’ depth and breadth in well-child care,” Ford says. “We used to run well-baby clinics all over with combinations of physicians and nurses. It was obvious there were a lot of things that nurses could or would do, and it would be satisfactory for them to run these clinics by themselves. Quite wrongly, people said we got into (the NP program) because of a shortage of physicians. It was true we didn’t have enough physicians to attend those clinics, but mainly because of the lack of physicians who were interested in working there.”

CU’s effort to extend and improve health care to all corners of Colorado got a big splash in summer 1966 when Time published a story about Susan Stearly, a graduate of the first-of-its-kind program, who was a smashing success in the small town of Trinidad as the nation’s first nurse practitioner. “Sue did a tremendous job of demonstrating the model and then, of course, we began to take in classes of nurse practitioners,” Ford says

y 1973, more than 65 NP programs existed in the United States. Currently, according to the American Association of Nurse Practitioners, the nation has more than 192,000 NPs with specialties that include maternity, child health, geriatric, family, surgical, psychiatric and community nursing. Acute care nurse practitioner and NP roles dedicated to navigating the complex health care system are also in high demand.

In the mid-1960s, Judith Igoe was a public health graduate student at the University of Minnesota when she read the Time article about CU’s ground-breaking NP program. Igoe had already put in a stint as a public health nurse in Iowa, so she knew how valuable nurses were to rural communities. She marvels at how Silver trained Stearly to diagnose and treat basic health issues as well as provide preventative care. “It was because the notion that anyone but MDs doing diagnosis and treatment was not something people thought was legal.”

Igoe came to CU and enrolled in one of the first NP classes, and she immediately took to the Socratic teaching method. “We’d go to class with Dr. Silver for several hours and ask him questions, and out of that they’d figure out what kind of additional clinical experience we’d need,” she says. “Then we’d go to Denver General or other city hospitals and have mentors there.”

Silver, who went on to serve as the medical school’s longtime dean of admissions, died in 1991. Ford now lives in Florida and speaks at NP conferences. Igoe, a College of Nursing professor emeritus, went on to help develop the college’s school nurse practitioner program, teaching NP classes for 17 years before retiring in 2008.

While Igoe recalls how some negative pockets of faculty “gave Ford ulcers” in the program’s early days, “here’s where Silver and Ford excelled—the two of them are the most incredible ambassadors for new ideas that I have ever seen,” Igoe says. “They helped get physicians and faculty to realize that this new role for nurses would be great.”