(December 2017) The young mother lay in the Intensive Care Unit, color draining from her body. Her organs were failing. A team of pulmonary and heart specialists raced to save her life after a helicopter brought her to University of Colorado Hospital.

Before the birth of her second child weeks earlier, Danielle Soto, then 24, had been energetic and fit. Her husband was serving in the Army at Fort Carson in Colorado Springs. Danielle worked at a dialysis center, went to school and loved working out, hiking in the mountains and taking their son, Nico, to the Garden of the Gods where he could climb on little rocks while she gazed up at a cathedral of red spires.

Now, Danielle could barely breathe. As she held her mother’s hand she asked a haunting question.

Her mother, Destiny Marvin, did not but refused to submit to their worst fears.

“She was blue. I’m holding back tears. I’m panicking inside,” Destiny recalled.

Still, Destiny willed herself to be strong and to fight for both of them.

She squeezed Danielle’s hand and said, “You are still alive. Let’s stay positive. We have tons of people praying for you and you have the best doctor.” 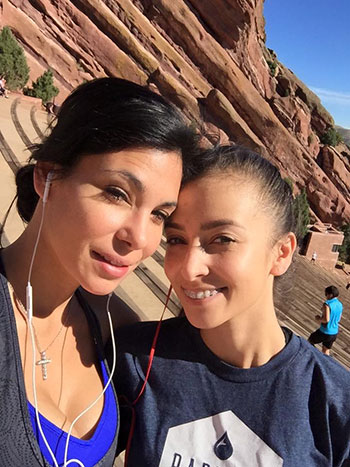 Danielle had given birth to her daughter, Haven, on May 10, 2016. After returning home, severe exhaustion overwhelmed her. She lay in bed around the clock, nursing Haven and cuddling with Nico, who was then 4.

Her husband, Sean Soto, then 23, stayed home with his wife and children as much as possible, but he had to go to work too. While Sean was away,

Danielle remembers forcing herself to get out of bed every few hours to make sure she and Nico ate. But even getting up to go to the bathroom took extraordinary effort.

Something was wrong and Danielle kept checking with her obstetrician, who wondered if she had lost too much blood during the birth and was anemic. Or perhaps she was dealing with post-partum depression. Danielle tried medication for both conditions, but her health continued to decline.

Over Memorial Day weekend, Danielle went to Target with Sean. They put Haven in the cart in her baby seat and Nico skipped into the store with his dad. Danielle could barely make it from the parking lot to the front of the store. She told Sean she needed to rest and that he should go ahead.

“I was walking like a 90-year-old woman. I could see my heart beating in my chest. I was watching everyone else walking by and thinking, ‘How can they walk so easily?’ Then it hit me. I waited for my husband and told him, ‘I need to go to the hospital right now.’”

The couple returned to their Colorado Springs home and waited for Danielle’s grandmother to watch the children. Then, Sean took his wife to the nearest hospital. She spent a miserable night struggling to breathe.

“I literally had to tell my brain to take a breath in and out. It was like someone was smothering you or an elephant was sitting on your chest or you were at the bottom of a dog pile.”

In the morning, after conducting an echocardiogram to assess Danielle’s heart function, her cardiologist quickly determined that Danielle needed to rush to UCHealth University of Colorado Hospital (UCH). He told her she had a rare illness called pulmonary hypertension.

“You’re going to be on Flight for Life. I know a doctor who specializes in this. He’s going to help you.”

There was no room for Sean on the helicopter. Everything became a blur for Danielle. Sean called her mom and told Destiny to race from her home south of Denver to Aurora so she could meet Danielle.

“It was surreal. When I got to the ICU, there were probably 15 or 20 doctors and nurses, and my mom was waiting,” Danielle said.

Among them was David Badesch, MD, who would help save Danielle’s life.

Badesch, professor of medicine, heads the Pulmonary Hypertension Program at the University of Colorado Hospital. It’s one of the world’s leading research centers for the disease. For decades, the center has led and participated in clinical trials for drugs that have dramatically boosted life expectancy for patients suffering from pulmonary hypertension.

“Back in the 1980s, when the disease was originally being described, the survival was only 2.8 years,” Badesch said.

Now, thanks to extensive research, median survival has improved to seven years or more. And some patients do much better.

When Danielle arrived, she was in grave shape.

“She was at considerable risk of dying. If she had come in even a few days later, it might have been too late. She was already in shock with liver and heart failure,” Badesch said. “We see many sick folks and she was among the at the time of presentation. Her case necessitated a very fast evaluation and getting her immediately on to therapy. We have a fantastic team of nurses, physicians nurse practitioners.”

Almost immediately, doctors threaded a catheter through Danielle’s jugular vein in her neck, then through the superior vena cava and the right side of her heart into the lungs. Known as a right-heart catheterization, the procedure allowed the team to directly measure blood pressure in the lungs and blood flow generated by the heart. They confirmed that Danielle was suffering from pulmonary hypertension. As with many of the most severe cases, the cause for her case is unknown and therefore called idiopathic pulmonary hypertension.

It’s possible that the hormonal changes in pregnancy aggravated her illness. Given that her heart had swollen to two times its normal size, doctors told Danielle that they were amazed she managed to give birth to a healthy baby and survive herself.

Once the diagnosis was confirmed, Badesch and his team began giving Danielle a medication that they helped develop and test at UCH more than 20 years ago called prostacyclin. They started with a small dose and increased it gradually.

While Danielle was finally receiving lifesaving treatments, she was not out of the woods.

Her mom remembers keeping a close eye on her coloring and vital signs. At first, her nails were chalky from lack of oxygen. Her kidneys were failing to produce urine.

“I remember looking at that bag and saying, ‘Please God, let there be urine. Let her organs start working again,’” Destiny said.

Destiny was unrelentingly positive with but sometimes had to take breaks in a nearby sanctuary room.

“I had to walk into that room. I dropped to my knees and cried my eyes out. But somehow she pulled through. Her organs started to pull through,” Destiny said.

“Dr. Badesch and his team were so gentle. They went over the top to be supportive of us as a family. Danielle really is alive because of how fast they moved,” her mother said.

Making peace with a new life

The medicine that keeps Danielle alive is also her pesky companion. Along with the of all moms — like diaper bags, snacks car seats — Danielle must carry a little backpack full of medication and backup doses for herself everywhere she goes. The backpack contains a pump loaded with a cassette of prostacyclin. The medication travels from the pump through tubing to a catheter in Danielle’s chest. It delivers infusions directly to Danielle’s heart.

While the medication keeps Danielle alive, it requires great attention to detail. Danielle has to keep everything sterile and carefully load new doses of the medication each night.

As she recovered, she had to find the will to live with permanent restrictions.

For instance, doctors often warn patients with pulmonary hypertension not to spend time at high altitude, but Danielle loves the mountains. To begin to feel like herself again, the family took a brief trip to Summit County last August. Danielle had to monitor her oxygen levels, but as she breathed in the scent of pine trees and gazed out of over Lake Dillon, she began to make peace with her losses.

“I was still sad about the whole thing, but it showed me I could still go to the mountains,” she said.

The family recently celebrated Haven’s first birthday. These days, Haven is saying dada, mama baby as she carries baby dolls around. She loves dancing and adores her big brother.

Danielle has learned to relish every moment with her children.

“I would hate to miss all the special things they’re doing,” Danielle said. “I’m grateful to be able to take care of them.”

She also has begun to think about the future. She’s eager to return to school someday to earn a master’s degree in education. “I want to teach at a Christian elementary school,” Danielle said.

And she’s dazzling Badesch with her fitness levels. She’s back to working out and each time she comes in for a follow-up visit, she completes a step test to prove her mettle. During a recent visit, Danielle asked if she could run during the test. Badesch gave his approval.

Every year, families affected by pulmonary hypertension, along with the medical experts who help them, meet at Denver’s City Park for a community celebration and fundraiser called PH in the Park. This year’s event took place on Aug. 27.

“I’m just thankful to Dr. Badesch and his team. They made sure I understood all that was going on. I always have their support. They made it a little easier for me to accept (my illness),” she said.

As for Badesch, seeing a patient like Danielle thrive fuels the motivation for groundbreaking research.

“It’s a huge challenge to actually cure this disease. Right now, what we have are treatments that are successful in controlling it,” Badesch said.

The onset of pulmonary hypertension is often between age 20 and 50. While the idiopathic form is rare and Danielle’s case was especially severe, Badesch has treated other young mothers who were stricken. Decades ago, when young women received the diagnosis, they often were advised to “get their affairs in order.”

“Young women essentially were being given a fatal diagnosis. But now (with improved treatments) and continuity of care, we see many of these women back 15 or 20 years later. Their kids have grown up. That’s what excites me most about what we do,” Badesch said.

Of Danielle, Badesch said, “Hopefully, we’ll be able to see her raise her baby.”

This article originally appeared in the UCHealth Insider in June 2017.