Testing a New Treatment for Breast and Ovarian Cancer 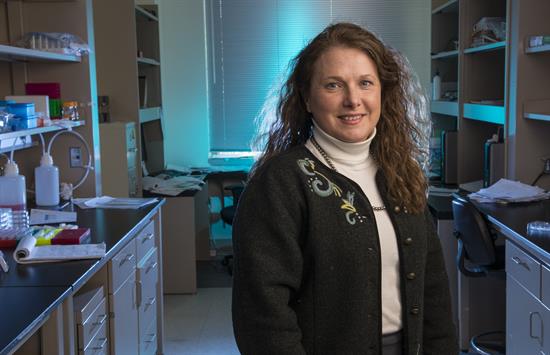 (May 2015) University of Colorado Hospital (UCH) is one of just two academic medical centers in the nation that has enrolled breast and ovarian cancer patients to a new clinical trial of a promising cancer vaccine.

The trial focuses on the safety and early test for of ONT-10, made by Seattle, Wash.-based Oncothyreon. It’s designed to stimulate the body’s own immune system to attack cells expressing MUC1, a protein found in a number of cancers, but especially ovarian and breast cancers.

“In an initial phase 1 study in all different types of cancers, we saw an excellent safety profile and also evidence of response in people who had very advanced late-stage cancers,” says Virginia Borges, MD, the University of Colorado School of Medicine medical oncologist who brought the trial to UCH.

U.S. Food and Drug Administration phase 1 studies focus on the dosing and safety of drugs that have shown promise in animal models. Very promising drugs such as ONT-10 can show evidence of effectiveness at this early stage of clinical testing, too. Borges describes the trial being done at UCH as an “expansion study.” Investigators already have a handle on ONT-10’s dosing. They’ve now added patients with breast or ovarian cancer to further assess the drug’s safety and efficacy, Borges says.

Both breast cancer and ovarian cancer patients at UCH are already taking the vaccine as part of an ongoing trial. A second study, now ramping up, combines ONT-10 with , an antibody developed by Hampton, N.J.-based Celldex Therapeutics. Varlilumab uses a different molecular pathway to stimulate patients’ T cells to work better and help the immune system to attack tumor cells.

Borges estimates that she and CU Cancer Center colleagues, including the recently recruited Jose Mayordomo, MD, a breast oncologist with immunology expertise, and Jennifer Diamond, MD, a phase I clinical trial expert, will treat 15 breast cancer patients and 15 ovarian cancer patients during the ONT-10/varlilumab study, with Diamond focusing on the ovarian cases.

In both of the current ONT-10 expansion studies at UCH, the women enrolled have advanced cancers that have spread again despite conventional attempts (chemotherapy, hormonal therapy, antibodies, and small molecules) to slow it. Robin Nash was one such woman.

Nash, now 48, is a mother of two in Castle Rock. In early 2012, she was busy with teenagers and running the U.S. distributor of Bobux, which are starter shoes for babies and infants, with husband Troy. She was also a breast cancer survivor, having detected early-stage disease in 2001 and gone through a lumpectomy, chemotherapy, radiation, and hormonal therapy. Through it all, she studied breast cancer and its treatments, amassing materials in a three-ring binder. When she was clear of the disease, the binder ended up under the bed to be forgotten.

Then, 11 years later, a check-up parathyroid blood test came back sketchy. Lymph nodes in her chest lit up under ultrasound.

The diagnosis fell on May 4, 2012, two weeks before her daughter Karli’s high school graduation: breast cancer, metastatic, stage 4. She and Troy waited until Karli had her diploma before they told her and son Jake. By then Nash had already set the wheels of treatment in motion.

“I crawled under my bed and dug out the bulging three-ring binder with all the records from 11 years prior and set out to find the best treatment plan and assemble my team of health professionals,” she says.

“Taking charge and not just sitting back,” as Nash put it, would be pivotal in her making another leap from breast cancer patient to breast cancer survivor.

A PET scan found three bone metastases in her spine in addition to the lit-up lymph nodes. Nash started treatment in June 2012, with Faslodex injections and Herceptin infusions, later augmented with Arimidex. The drug combination seemed to keep things in check until February 2013, when her oncologist tried her on a combination of Xeloda and Tykerb. That triggered a bad reaction, which led to a combination of Afinitor and Aromasin. The bone metastases responded; the lymph nodes didn’t.

While Radhika Acharya-Leon, MD, at Mile High Oncology, led Nash’s treatment, Borges was among the doctors Nash had consulted after a referral from a friend. When the question of radiation therapy came up, she met with two metro-Denver radiation oncologists and then checked in with Borges, who referred her to Rachel Rabinovitch, MD, a CU Cancer Center radiation oncologist. Five doses of radiation at the UCHealth/ CU Lone Tree TomoTherapy Center later, the lymph nodes were clear.

That was in February 2014. By June, however, there were new spine metastases that led to a new drug : carboplatin and Gemzar. In the meantime, Nash had gotten wind of the ONT-10 trial. Nash met with Borges, who had recently opened the first ONT-10 expansion study to UCH patients, soon thereafter. Nash told Borges she was concerned with it being a phase 1 trial. Borges, whose work with experimental therapies targeting MUC1 dates back 15 years, clarified that this was an expansion study and that ONT-10 was proving to be safe. Nash enrolled.

After four weeks of taking no drugs at all (a required wash-out period), she started on ONT-10, which involved taking four injections, one in each major appendage, once a week for eight weeks. Nash noted no side effects, and her immune system annihilated the spine metastases, which had already been diminished by the carboplatin/Gemzar combination.

She is now on a “maintenance program” with the drug. It involves the four injections once every six weeks. She’ll stay on until ONT-10 for as long as it controls her cancer, she says. In the meantime, she’s training for a half marathon.

“The fact that I’m on treatment that has no side effects and I’m stable is incredible,” Nash says.

Borges sees immune-based therapies’ long-awaited delivery on their promise as a big part of the future of cancer treatment.  Drugs like ONT-10, she says, are the results of the “hard work” of hundreds of researchers around the world who have each figured out a piece of a complex puzzle. That has led to better understanding of the immune system and how to fight back against ability to use the immune system against the person,” she says.

“We are at a point where cancer vaccines are a reality,” she concludes.

For more information on the ONT-10/varlilumab study, contact Anna Nelson at Anna.L.Nelson@UCDenver.edu.

This article originally appeared in the UCHealth Insider.