(May 2016) Victoria Browning and the Anschutz Medical Campus grew up side by side in Aurora. But once Browning graduated high school and began working in health care, the two seemed destined for separate paths.

“I applied for several jobs on campus, but it was mission impossible,” says Browning, who has a background in medical assistance, lab work nursing home care.

Browning’s struggle to land a job on campus ended when she entered the Hire Local program through the Community Campus Partnership (CCP), an organization funded by the University of Colorado and The Denver Foundation since 2013 to create links between the campus community and surrounding low-income neighborhoods.

One of several CCP missions, Hire Local began last year with a pilot project funded by a grant from the Colorado Department of Education to the Community College of Aurora. Entitled the Healthcare Bridge Program, the pilot enables CCP to partner with the college and both hospitals on campus to educate local students for jobs.

Since last spring, four cohorts have graduated in two entry-level fields of customer service and sterile processing, both high-turnover positions at University of Colorado Hospital and Children’s Hospital Colorado.

“We want to make the campus look more like the surrounding neighborhoods,” says CCP Director Robert McGranaghan, MPH, senior instructor in the Department of Family Medicine. “It is important to think about investing in programs that will result in improved well-being, health, wellness diversity.”

The students go through 10 weeks of training that include classes in interviewing, resume building, computer skills job readiness.

Many graduates would have had a hard time finding work without Hire Local, McGranaghan says. Some are immigrants who are unfamiliar with local hiring processes.

Others have been out of the a long time.

“Some folks have not completed high school,” he says. “We had a student in her 50s in the first cohort who had never touched a computer.”

Just as Hire Local was starting up, CCP invited campus employers to meet with community members to talk about obstacles to campus employment. 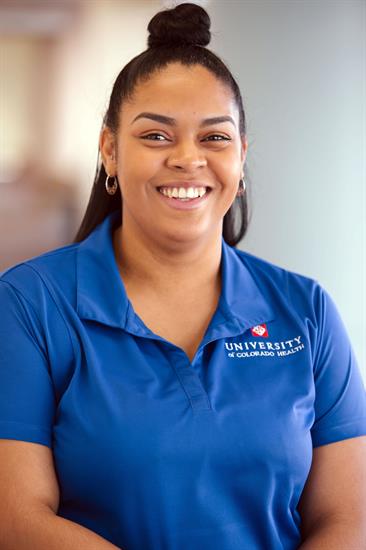 “We learned there were a lot of barriers,” says Lisa Jensen, BSN, the partnership’s campus connections program director. “(Community members) weren’t sure what entities exist on campus. They had no idea how to get a job in a hospital. Some had applied continuously and never got a response. Some were not even sure they were allowed on campus.

“And what was clear is that they didn’t just want a job. They wanted to contribute. They felt their skills and knowledge would help the hospitals deliver better care because they would be able to communicate with people like themselves.”

At the end of the summit, campus employers began working with CCP to find ways to smooth the path for local applications.

Hire Local has been so successful that CCP leaders plan to expand the program to include more careers for local residents including certified nursing assistant, medical assistant medical coder.

“We want stackable jobs – entry-level jobs with a career path,” McGranaghan says. “This is not a social service, this is a market service to help fill (campus employer) needs in high turnover jobs. “

Other CCP projects in the pipeline include:

All these efforts are intended to help the campus be a good neighbor to communities that rank amongst the state’s poorest, McGranaghan says.

“You can make the argument that if you employ people who live locally, they are arguably more likely to keep their job,” he says. “High turnover rates may decrease if they get the support they need. We’re working to ensure retention.”

Browning, who has worked since November as a patient access representative in the CU Department of Medicine's Division of Internal Medicine, is hoping for a future at UCH.

“I feel like there’s so much room for growth,” Browning says. “And oh my goodness, it literally takes only 10 to 15 minutes to get to work.”