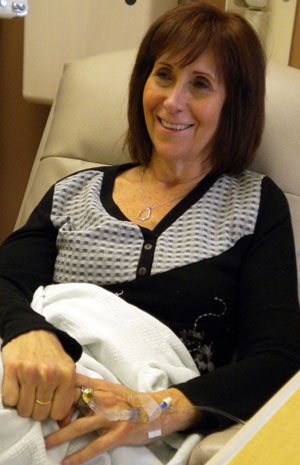 (May, 2013) Wendy King first found out about multiple sclerosis while in grade school when her older sister was diagnosed.
“I went to the school nurse and asked her what multiple sclerosis was,” King recalls, “and she said, ‘Oh honey, I’m afraid your sister is going to be in a wheelchair and won’t live a full life.’”

Those words haunted King, who began noticing symptoms like leg numbness and headaches in her 20s. Her doctors told her not to worry; they believed (incorrectly) that it was unlikely that two people in the same family would have MS. Her healthy lifestyle, plus a lack of reliable diagnostic tools, meant she went about 10 years without an accurate diagnosis.

When she finally learned she had MS, a major transformation in MS treatment was sweeping the field. CU’s Timothy Vollmer, MD, describes a shift from a “diagnose-and-adios” culture to the “golden age of MS treatment.”

“From 1860, when it was first diagnosed, to 1993, we had no therapies that were helping MS patients,” says Vollmer, professor and director of clinical research in the Department of Neurology and co-director of the Rocky Mountain MS Center at the Anschutz Medical Campus.

Today there are nine drug labels available. The first was an interferon-based medicine that worked well for many people with relapsing-remitting MS, the most common form of the disease.

The most effective drugs can have fewer side effects and attack the disease on the molecular level; some even reverse nerve damage. All of those drugs—and two new drugs in the pipeline to FDA approval—were developed with help from CU researchers, who typically oversee 25–30 ongoing clinical trials.

“I tell patients when they are diagnosed that it is one of the most treatable diseases in neurology,” Vollmer says. “Being in clinic is a lot of fun now. It’s not as emotionally tolling as before.”

It’s not just the drugs that are making the difference, Vollmer says. Scientists have learned a great deal about the disease, which affects the central nervous system, has no known cause and attacks an estimated one in 550 people in Colorado. Patients are told to watch their weight, to avoid smoking, to exercise and to take vitamin D. “The patient has to be a partner in treatment,” he says.

“Without treatment, 50 percent will be in a wheelchair or will be using a cane within 15 years of diagnosis,” Vollmer says. “But now, we have a good chance of preventing major disability in most of the newly diagnosed and some patients can be put in full disease remission.”

However, John R. Corboy, MD, professor and director of faculty affairs at the Department of Neurology, and co-director of the Rocky Mountain MS Center, cautions that not all treatments work for all people, and some drugs have debilitating side effects.

For example, the first drug King was prescribed was Betaseron, which for her “was like having the flu 24/7.”

Her neurologist told her she could take a break from it, and she did—for nine years. “That wasn’t what he intended,” she says. She began seeing another neurologist, who put her on Copaxone. But, worried that her symptoms were worsening, she found Vollmer because “I wanted the most aggressive treatment possible.”  Vollmer came through. He started her on Natalizumab (Tysabri), a new drug that prevents relapses 70 percent of the time.

She says it works well for her, but she learned that her years in denial could come at great cost. The drugs are most effective if taken early in the disease process.

“He told me that had I waited a little longer, I was not heading in a good direction and some of the options might not have been available. That scared the hell out of me, I can tell you.” 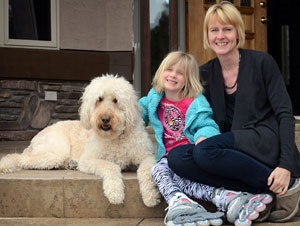 Anne Marie Pewterbaugh, who was diagnosed in 2009, started out on Tysabri but learned she has a common virus that can cause serious side effects when mixed with Tysabri. She is now taking Rituximab (Rituxan) a drug that’s been approved for lupus and non-Hodgkins lymphoma but also works very well for MS patients.
Pewterbaugh, 47, also believes she had symptoms nearly two decades but was initially misdiagnosed.

“I didn’t get help as soon as I could have,” Pewterbaugh says. “When the doctor finally told me I have MS, I said, ‘I know I have MS.’ Of the 10 MS symptoms you can have, I had six to eight of them.”

King and Pewterbaugh say their symptoms are now manageable—a giant leap especially for Pewterbaugh, who suffered crushing fatigue and migraines initially. Despite the long wait to a diagnosis, both say most people don’t know they have MS.

“It’s not pertinent to my ability,” says King. “It doesn’t define me, which is what I was afraid of for a very long time. I won’t let it, and I don’t have to.”

That’s exactly what Corboy wants to hear. “We want to know how they are feeling, are they employed, are they married, do they have children—things that are important to them,” he says.

Quality of life is one of the goals of the Rocky Mountain MS Center, which is one of the most comprehensive MS centers in the world and treats most MS patients in Colorado and Wyoming.

“We have our fingers in everything,” Corboy says. “We run clinical trials, do basic research and patient visits. We have adult day-enrichment programs, psycho-social and occupational therapy, educational seminars and other support. We have a trained hospitalist, so when patients go to the hospital, they’re taken care of by one of us. We have a pediatric neurologist program. The combination of research, patient care, education and supportive services is virtually unique in the U.S.”.

“We even helped write the legislation that requires insurance companies to pay for health care of people in Colorado going through clinical trials.”

The steady progress in treatment is especially remarkable considering that for the first 150 years “every therapy failed,” Vollmer says. “Now we’re working on a vaccine.”

That’s good news for Pewterbaugh and King, both of whom have children. MS tends to run in families.

With or without a vaccine, Corboy compares the progress in MS research to that of HIV/AIDS.

Read Anne Marie Pewerbaugh's essay MS Day to Day - What Gets You Through for the Rocky Mountain MS Center's InforMS publication.