Treatment Shows Promise in Quelling a Type of Lung Cancer

Personalized Medicine Leads One Patient to Ask, "Can I go Scuba Diving?"

(May 2, 2011) The words "adenocarcinoma of the lung" required no further explanation. As a physician herself, Gene Burges knew what they meant.

But nearly two years later, the dermatologist and associate professor at Medical University of South Carolina has kicked the chronic cough and night sweats, and—according to her grateful sons—has returned to her "energetic self." After watching the glowing orange beacons of cancer disappear from her scans, she went so far as to buy a new house this year.

"I know it sounds crazy, but that’s how good this drug makes you feel," says Burges, who travels 1,700 miles from her Charleston home each month to participate in a University of Colorado Cancer Center trial of a new lung cancer drug called Crizotinib.

Only about 4 percent of patients (roughly 10,000 new U.S. lung cancer cases annually) possess the ALK mutation and are eligible for the drug. But while that number may seem small, extraordinary successes in early multicenter trials (shrinking or stabilizing tumors in 90 percent of patients) have become big news for two reasons, cancer specialists say.

One, it’s providing another much-needed weapon in the limited arsenal against the world’s deadliest cancer. And two, it could ultimately lead to a shift in the way other cancers are treated.

"We now know that what is driving the cancer is different between different cancers. If we can screen people for these oncogenic drivers and give them the right drug to interfere with the one they have, we can have a real impact," says Ross Camidge, director of the Thoracic Oncology Clinical Program at the cancer center and principal investigator for a number of ALK-inhibitor trials. "One-size-fits-all treatments are yesterday’s paradigm. This is personalized medicine."

According to the National Cancer Institute, more than 222,000 cases of lung cancer are diagnosed annually and 157,000 people die of it. Ninety percent have a history of smoking. But some forms of lung cancer, such as ALK-driven non-small-cell lung cancer, tend to arise in non-smokers, like Burges.

The vast majority of lung cancer patients get their diagnosis late in the when the cancer is too far gone to be surgically removed or treated with radiation. The "gold standard" of treatment has long consisted of, as Camidge puts it, "chemotherapy, then more chemotherapy, then hospice," with average one-year survival rates for advanced lung cancer patients hovering at 25 percent, and five-year survival rates around 3.5 percent.

That breakthrough began to emerge somewhat by accident in when a new class of therapies targeting a protein called the epidermal growth factor receptor (EGFR) was licensed. Links had been drawn between EGFR and lung cancer, and doctors began to broadly prescribe EGFR-inhibitors to patients who had exhausted other alternatives. Overall, Camidge recalls, the results were "unimpressive."

But some patients were "exquisitely sensitive to the drug," he notes, such as the one who put on 40 pounds and came off oxygen within weeks. As it turned out, those sensitive patients (roughly 10 percent of non-small-cell lung cancer patients overall) had a mutation in the EGFR molecule that not only drove their cancer but also made them particularly responsive to the drug. 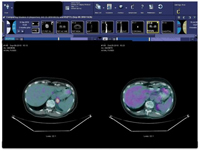 It took several years for researchers to identify this subset, but the realization paved the way for a new approach for developing drugs for cancer, Camidge says. Identify the molecular group most likely to benefit, profile patients in advance and then try out your hypothesis with a specifically targeted drug early on.

"The original way of doing things was to throw a bunch of keys at cancer and hope one of them hit a lock," Camidge says. "With EGFR inhibitors, we learned that we could identify up front who had which lock and direct the appropriate keys to those locks."

In 2007, after a group of Tokyo researchers found that roughly 4 percent of lung cancer patients had a change in the ALK gene in their cancer, CU cytogeneticist Marileila Varella Garcia began to develop one of the world’s first screening tests to easily identify them. By 2008, the first ALK-positive patient had been found, at Massachusetts General Hospital, and placed on Crizotinib (then known as PF-02341066). That patient did remarkably well.

On Oct. 28, 2010, Camidge and others authored a Phase I study in the New England Journal of Medicine showing that of 82 ALK-positive patients treated with the drug for six months, 47 saw their tumors shrink or disappear and 27 stabilized. Early trials were so successful the drug is now in Phase III trials, pitting it against chemotherapy in several different settings, with more than 300 patients treated to date and FDA approval anticipated within the year. As an early innovator, CU now screens every lung cancer patient for ALK, EGFR other oncogenic drivers, and cares for one of the largest ALK-positive populations in the world.

"I know if the drug is working within days because the patient comes in and says ‘My pain has disappeared,’" says Camidge. "I have patients asking me questions I have never been asked in a lung cancer clinic before, like ‘Can I go scuba diving?’"

But ALK-positive patients aren’t the only ones set to benefit from the emerging research on molecularly targeted therapies.

In September 2009, CU joined forces with 13 other leading cancer centers to form the Lung Cancer Mutation Consortium, which aims to study other molecular drivers (10 have been identified thus far), develop screening tests and match the right drugs with the right patients, says CU School of Medicine Professor Paul A. Bunn, MD, who heads the consortium.

"If this works, it will have a bigger impact than Tamoxifen and aromatase inhibitors did" in lowering breast cancer rates, he says. "It’s big."

Burges says she is but realistic.

Having tested positive for the ALK change, she found her way to the University of Colorado in the fall of 2010. She went off chemotherapy, took her first pill Sept. 1 and was shocked six weeks later by what she saw on her scan.

"It was phenomenal," she recalls. "It was near complete resolution of disease."

Today, she says she doesn’t feel the "immediacy of death anymore." But she knows that the chances of her being alive in two years are not good; even though the drug has quieted the driver of her cancer, cancers mutate and it will almost surely be back, driven by something else.

The average time before comes back is about nine months. Camidge and other researchers are already looking at what else is that might be changing in when it becomes resistant, and how to treat it.

"I am just trying to stay alive until the next thing comes along, and someday that next thing is going to be a cure," she says. "Will that before I die? Probably not. But that day is going to be in somebody’s not-so-distant future."