Learning Outside the Walls of Medical School

Introducing students to the personal experiences of patients

(May 2017) When Jackie To came to the University of Colorado, she committed to four years’ intense study at the School of Medicine, then augmented her training by joining C-STAHR.

Through research, education and advocacy, C-STAHR (Community-Students Together Against Healthcare Racism) offers Anschutz Medical Campus students a deep dive into the health concerns of neighboring communities to learn about health disparities.

“I have never heard of a group that works this closely with the community at every step of the decision-making process,” said To, who will graduate in May from the CU School of Medicine. “It was very appealing that we would be forming relationships at a very grassroots level.”

A group of medical students began C-STAHR after hearing Salud Clinic Director Tillman Farley, MD, a CU School of Medicine alumnus of the class of 1987, give a presentation about health disparities. The students partnered with 2040 Partners for Health, a health care advocacy group representing Northwest Aurora, East Montclair, greater Park Hill, Northeast Park Hill and Stapleton neighborhoods. C-STAHR members use community-based participatory research techniques to ensure residents are involved in all aspects of the research process.

“I immediately fell in love with the idea that we could actually go about making some sort of difference in the way doctors interact with patients,” To said. “But the reason I kept coming back to C-STAHR was the community members, quite honestly. I felt like I had never really had that kind of exposure before.” 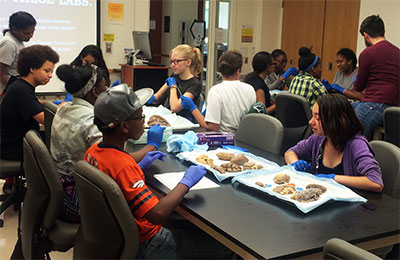 In addition to conducting research, C-STAHR students created the Health Esteem futuRe pOwer Encouragement Speak up (HEROES) program, which educates minority high school students about health-care careers. Others are involved in addressing the CU School of Medicine’s curriculum so that it reflects more diversity.

Meanwhile students initiated other projects using the C-STAHR model under the umbrella of 2040 Community-Based Student Program including research focused on maternal-child health, teen obesity and alcohol use in the Burmese refugee community.

Now in its sixth year, 2040 Community-Based Student Programs, which includes C-STAHR, has 61 students (and 19 graduates) from the schools and colleges of medicine, pharmacy, nursing and public health. The projects ask for a four-year commitment from medical students, who receive training in leadership, grant writing and research, said Janet Meredith, MBA, senior clinical instructor in the Department of Family Medicine and director of student programs at 2040 Partners for Health.

“They really get to know people who are different from themselves,” Meredith said. “When they hear a woman talk about her experience with segregation … (or) a community member who lost two sons at the hands of Denver police and a daughter who died of pneumonia because it was too expensive to go to the hospital, they get an education in a way that they will never pick up in a book.”

Megan Kalata, a second-year medical student, became interested in pediatrics because of research showing that children who are healthy when they begin school at age 5 are likely to continue in good health.

“It’s a lot harder to catch up later on,” she said.

When casting around for a project, she was concerned by studies showing that babies born to African-American women are three times as likely to die compared to those born to white mothers.

The studies showed that the results were not affected by age, education or socio-economic factors, but rather indicated that levels of stress-related cortisol are higher in African-American women.

In February 2016, she organized focus groups to ask African-American women about their health-care experiences during pregnancy.

“Every time we met I learned something different, and I started hearing a lot of things repeated that I wouldn’t have thought about.”

One theme that emerged was the reception African-American women received in their first prenatal visit. About half the women said their health-care provider recommended an abortion.

“Now, some were young – teens even – but others were in their 30s, engaged to be married, and had a stable life. Some were in graduate school.

“Another common theme was their personal level of comfort talking to a provider and feeling judged and not feeling like they can ask good questions. We’re trying to tease out if that happens with all providers including doulas, doctors and midwives.”

When Jackie To’s father had a stroke during a family vacation, he encountered verbal abuse from the emergency doctor.

The family had been vacationing in Nevada when the stroke occurred, but their insurance only covered him in California. To and her parents knew that quick treatment was important for her father’s recovery, but they also knew they couldn’t afford treatment without insurance.

“When we showed up at the emergency room in California, the doctor started screaming at us about how we shouldn’t have waited. He said we should have just gone to the first emergency room we found. It was terrifying. I was 19, and I spoke up for my dad and told the doctor that would have bankrupted us so we intentionally made that decision. We took a chance.”

The physician’s demeanor changed when he realized that, unlike her immigrant parents, she could speak English well. He asked her about school, and she told him she was a freshman at Stanford University.

“After that I was treated differently than my parents. If I hadn’t been there, I expect the encounter would have gone very differently. I think about all the other families out there who don’t have a daughter accompanying them to an emergency room; a daughter who speaks excellent English and is going to Stanford.”

Her research project at C-STAHR is meant to help people like her parents. Students and community members decided to focus on patient-provider communications after hearing patients complain about doctors ignoring them during visits.

To is sympathetic to both patients and providers.

“Physicians have a specific agenda to get through and a limited amount of time to do it. That can make them curt and impatient. In that encounter you might feel the doctor is rushing you through and not addressing the things you’re actually concerned about. That makes you feel like you have no power. So the time crunch causes miscommunication and perceived discrimination.”

Using a survey tool, the team asked patients to prioritize their concerns so they can be mentally prepared for their visit. Team members also encouraged the patients to be assertive. “You have the right to speak up!” she said.

Through focus groups, To learned how important a doctor’s language and communication style can be.

“Working with community members made me hyper-aware that things you say can be misinterpreted.”

2040 Community-Based Student Program research will continue after To, Kalata and other students have graduated because other students will advance the studies with the help of community members.

“What’s valuable and noteworthy is that the students really own the program,” says Frank DeGruy, MD, MSFM, chair of the Department of Family Medicine. “Faculty help navigate things like Institutional Review Board policies, but students set the agenda.”

The program has proved to be an important recruiting tool for incomng students interested in community work, said Shanta Zimmer, MD, associate dean for the Office of Diversity and Inclusion. And participants tend to experience successful residency matches, Meredith said. Between 2014 and 2016, all but one graduating medical student placed in their first choice for residency.

“One of the things that the institution gets out of this is that we as faculty have these students who are role modeling incredible commitment to advocacy and community engagement,” Zimmer said. “Being a physician is more than the facts they are learning in medical school. It’s a lifelong commitment to service. The partnership comes from the community and reminds us all again that it’s not just the things we’re studying but also what we’re learning from patients. They teach us well.”