Friendships Arise from a Tragic Loss, but "You Need to be Careful"

(May 2, 2011) John and Margaret Moyer went on a difficult visit years ago to meet a Centennial couple for the first time. After getting to know each other, Margaret asked if she could put her ear to the man’s chest.

She listened—and heard the steady beat of her son’s heart.

She’d first heard that sound 23 years earlier when Andy Moyer was in her womb. A physics major at CU Boulder, Andy had died after a 1992 skiing accident the day before Christmas. As other families brought Christmas presents to their own loved ones in the hospital where Andy lay, Margaret and Dr. John Moyer, a School of Medicine clinical faculty member, decided that their gift was going to be their son’s organs.

In this they learned that medicine can create powerful and unexpected bonds. Hoping for closure and connection, the Moyers wrote through intermediaries to three people—whose identities they did not know—who had received Andy’s organs. The Moyers asked if they could meet some day.

At first, nothing. Then a man from Queens, N.Y., responded. In a warm, hand-written note, he said that he had received Andy’s left kidney. The families have gotten together several times, memorably at the wedding of the recipient’s oldest daughter in 2004. Friends of the man told the Moyers how his awful pain and suffering had been relieved.

For a few years, the Moyers received a box of candy at Christmas with a card that said only, "From a grateful organ recipient." Then the recipient came forward. He had been given Andy’s liver and right kidney. Since the transplants, that man has welcomed 10 grandchildren to his family. 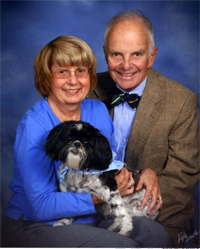 And Moyers met the man in Centennial with their son’s heart beating in his chest. On that first visit, six months after Andy’s death, Margaret listened; John could not bring himself to hear that sound. But the meeting helped.

"We walked in wondering, ‘What are we getting into?’" John Moyer recalls. "Three hours later, when we left, we were highly encouraged and happy."

The man had suffered from irreversible myocardial inflammation. The Moyers still meet with that couple three or four times a year and have gotten to know the extended family. John Moyer says that, while they always will ache for their son, it’s comforting to know Andy has contributed to the lives of three other people.

It can be a tricky thing, this bond that medicine creates. "You need to be careful," John Moyer because both donors and recipients have to set their own boundaries.

Moyer did his residency at The Children’s Hospital and remains on clinical faculty there. He helped run the Foundations of Doctoring course at the medical school and now volunteers for the course.

He teaches students how to get to know their patients through empathy.