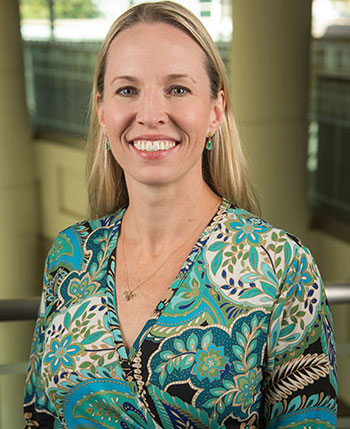 (December 2017) Can mental illness be prevented in the womb?

That’s a question M. Camille Hoffman, MD, MSCS, associate professor of obstetrics and gynecology and psychiatry, is investigating. Specifically, Hoffman is studying the impact of a nutritional supplement, choline, on maternal outcome and delivery and on the child’s development up to age 4.

“My research is focused on developmental origins of mental health, or setting fetal trajectories, in the realm of mental and behavioral life-course health,” Hoffman said.

One of those conditions is schizophrenia, a chronic and severe mental disorder with symptoms that are often not fully recognized until the person is between ages 16 and 30. Other mental health conditions, such as bipolar disorder, autism spectrum disorders, ADHD, may also be improved by choline consumption during pregnancy.

Choline, a vitamin-like nutrient found in eggs, meat, poultry, fish, peanuts, and dairy products, was recognized as an essential nutrient by the Institute of Medicine in 1998 and recently was endorsed by the American Medical Association to be included in prenatal vitamins.

“In most populations, moms will encounter the recommended daily amount of choline (450mg) unless they’re vegan or allergic to eggs or avoid some of the most choline-dense foods in general,” Hoffman said.

The extra choline is not known to pose any risks to the pregnant women and their babies and in some situations, the woman’s conditions may also affect the transfer of choline to the developing baby.

“Even if a mom is consuming adequate amounts of choline, the recommended daily amount is about half of what a pregnant woman needs for this good fetal brain development,” Hoffman said. “And other situations like stress, illness, infections, maternal mental and physical illness will lead to moms sometimes sequestering it or not adequately transferring choline to the baby.”

The potential of the extra choline (about 900mg daily in the study), though, could be significant, especially when compared with the break-through finding that folic acid supplementation had a beneficial impact for pregnant women and their babies.

“With folic we reduced in rough numbers the risk of an open neural tube defect from a baseline of 1 in a 1,000 to 1 in 10,000,” Hoffman said. “So then if you consider mental illnesses, schizophrenia affects about 1 percent of the population, bipolar disorder 1 to 2 percent, autism spectrum disorders 1 to 2 percent, ADHD even a higher percentage, if choline is efficacious in remodeling fetal brain development and preventing or even reducing the prevalence of these conditions, then the population impact is potentially huge.”

Hoffman’s current study builds off work conducted by Robert Freedman, MD, former chair of the Department of Psychiatry, and her former research colleague Randy Ross, MD, professor of psychiatry, who died in December 2016.

In that study, researchers recruited 100 pregnant women to review whether giving choline during pregnancy would enhance brain growth in their developing fetuses. After birth, the infants were given a placebo or liquid phosphatidylcholine.

At five weeks old, the infants were exposed to a series of clicking sounds and they were monitored for reactions. In normal cases, the brains exhibit inhibition – recognizing the subsequent clicks as familiar and not significant. However, for some, this inhibition doesn’t occur, a finding linked with an increased risk attention problems, social withdrawal, and perhaps schizophrenia.

Researchers concluded that was not enough to recommend a change in practice, so the current study aims to broaden the size of the study and to track children through age four. The study is currently open and Hoffman hopes to recruit 250 pregnant participants over the next four years.

She cautions that the reactions to the clicking sounds or a concerning assessment when the child is 4 years old not a diagnosis, just an alert.

“We’re not saying that all withdrawn four-year-olds are going to develop schizophrenia in young adulthood,” Hoffman said. “Rather, our thinking is that if you can prevent it or mitigate it with something this simple, why wouldn’t you?”