Harnessing the Power of the Human Immune System

Building a strong base for immunology and immunotherapy research

(May 2017) Treating disease by harnessing the power of the human immune system has emerged in recent years as a critical area of inquiry in medical science.

On the CU Anschutz Medical Campus, the Human Immunology and Initiative (HI3), one of the five Transformational Research Funding projects funded by Dean John Reilly, MD, has been organized to provide focus and resources for such an effort.

Immunotherapy, which was described by Science magazine as the Break-through of the Year in 2013, has led to major changes in the standard of care for some diseases and is particularly useful in infectious disease, autoimmunity, allergy and asthma and has been widely recognized for its potential in treating cancer.

“Immunotherapy is important because, first of all, it represents a sea change in how we approach in cancer,” said John Cambier, , chair of the Department of Immunology and Microbiology and one of the directors of HI3.

“As a we’ve been working for decades to understand enough about cellular interactions in the immune system to get to a place where we can intervene and almost all of those studies have been in the mouse. It’s really only in the last 10 years or so that we’ve gotten to the point where we can take all that basic knowledge and formulate it into therapies.” During its initial year, the leaders of HI3 have targeted their efforts on assembling the scientific and clinical infrastructure needed to boost the impact of researchers working on and recruited to campus. “We made a conscious decision to take a go-slow approach, putting together all of our infrastructure pieces in a thoughtful and careful manner,” Cambier said.

“Any and all new recruits who are clinical scientists, who have translational as well as clinical delivery interests and intent, are going to need a certain infrastructure that doesn’t really exist on the campus, so we’re putting our money right now into building that essential infrastructure. In addition to recruitment, our main focus was to establish resources to test and monitor the state of the immune system in research studies aimed at discovery or in clinical trials aimed at monitoring patient care.” To that end, HI3 has established the Human Immune Monitoring Shared Resource (HIMSR) to fill in gaps between clinical and basic science research, providing sample preparation and immune-based assays. Equipment for sample processing, cell sorting, cytometry, cutting-edge imaging, and data analysis are among the pieces obtained or managed by HIMSR.

“It’ll probably be over $1 million worth of equipment in the end,” Cambier said. “We’ve taken delivery of what we had the space to accommodate. There are a number of investigators across campus, as well as external investigators, who have expressed interest in using the HIMSR for their studies. So there is already a queue to use this resource. HIMSR is already working with more than 20 groups on campus that want access to these services.” 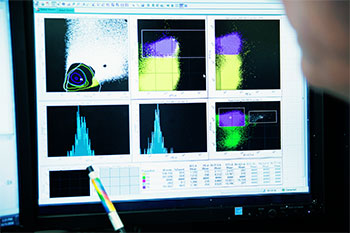 In addition, HIMSR offers free initial project consultation regarding research endpoints, the selection of appropriate assays. The HIMSR also offers coordination of investigators with available statisticians and to assist in study design and data and will continue to ask the scientific community for ideas related to testing and development of new technologies for immune monitoring.

The equipment and services – scientific and clinical infrastructure – are essential to building a strong foundation for the future of immunology research and immunotherapy on campus and to fulfilling HI3’s mission.

From there, HI3 plans to train future scientific leaders and recruit exemplary faculty.

“One of the purposes of bringing in really strong mid-to-senior faculty is that we’ll bring in people who have a history of innovation, who have shown in the past that they can do that part of it,” Cambier said.

HI3 is already recruiting high-profile researchers in partnership with other programs on campus, such as with the pediatric oncology program at Children’s Hospital Colorado. Internationally renowned recruits will help attract other faculty to campus.

“They will be important in doing the second-level of recruiting of people, who will probably be younger,” Cambier said.

There are other HI3 searches underway.

“We have three standing search committees: one looking for basic scientists who are focused on human immunology and translation, one in the autoimmunity space and that will be for clinician scientists and then one in the cancer immunotherapy area,” Cambier said.

One of the challenges of recruiting the top specialists in immunology and immunotherapy is that many other institutions are targeting this area of research.

“The reality is that everybody is trying to find these same people, so competition is keen,” said Cambier, who added that one potential recruit was interested in joining CU and then his home institution received a $150 million philanthropic contribution to support immunotherapy research. Each area requires a specific approach, akin to building a baseball team through free agency and by developing talent on the farm-team system.

“Whereas in the basic sciences, we are primarily interested in people who are early in their career. So you approach it in a different way, by advertising to see who shows up. So on the clinical side, you grow your own, meaning you have fellows in your program that you eventually bring on to the faculty or you find targets of opportunity.”

Andrew Fontenot, MD, professor of medicine in the Division of Allergy and Clinical Immunology and one of the directors of HI3, agreed that the goal is to bring in people who are “programmatic builders” who will help increase the number of RO1s on campus.

The potential benefits of immunotherapy, the demand for innovative care, the need to pick up the pace in comparison to some other institutions and to take advantage of the opportunities to serve patients will be driving forces for HI3 in the years ahead.

“We have a huge catchment area in terms of patients and we have nobody in the region who’s trying to serve it on the scale that the demand would dictate,” Cambier said. “So the idea is to get us up to speed, not only on the delivery of the therapies that are out there, checkpoint inhibitors and CAR T-cells, but also to innovate and develop the next generation of therapeutics.”