Getting the Lay of the Land in Guatemala 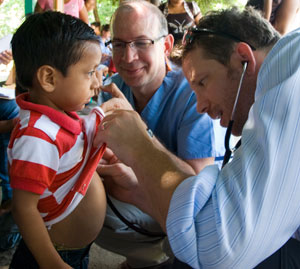 ( 2013) A line of children snakes around the concrete schoolhouse in the Guatemalan village of El Pomal, slowly baking beneath a tropical sun. Inside, a CU School of Medicine team sweats through their pale blue scrubs.

“We have seen 12 children so far and nine had diarrhea for more than two weeks and about two-thirds have parasites,” says Edwin Asturias, MD, assistant professor of pediatrics. “What we are seeing is a chronic cycle of poverty.”

Asturias and the CU medical team visited Guatemala last July to lay the groundwork for a partnership representing the university’s first permanent medical presence in a developing country.

The project, funded by a $1 million donation from the Jose Fernando Bolaños Foundation, will build a clinic, research lab, housing complex and conference center on 10 acres near a banana plantation owned by the Bolaños family. CU medical teams will treat the plantation’s 3,000 workers and 24,000 residents in surrounding villages.

The gift is a unique public-private partnership between a Guatemalan company and a public university in the U.S.

“As businessmen, we wanted a world-class organization with world-class resources to help us,” says Fernando Bolaños, CEO of AgroAmérica, which owns the plantation. “We are making a huge, formal commitment. I have known Edwin Asturias for years and I consider him one of the top public health doctors in the world. We are proud that he is Guatemalan and has such an incredible social conscience.”

Southwest Guatemala is among the poorest parts of the nation. It looks like a tropical paradise, but basic hygiene is lacking. Residents often share dirt-floor homes with livestock. Regular flooding causes toilets to overflow, contaminating drinking water. Doctors are few, hospitals even fewer. 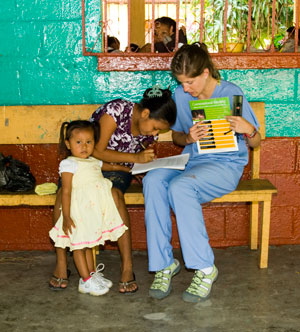 For Asturias, the project is about coming home and giving back. Asturias graduated as a medical doctor from the San Carlos University in Guatemala in 1989 and was board certified in pediatrics at the University of Colorado Anschutz Medical Campus in 1995.

“We do a lot of international research but this is our first permanent presence in a developing country,” he says. “Our people are some of the best in the United States and now we can offer them this kind of regular experience outside of the country.”

They collect blood and stool samples to better understand the local parasite and anemia problem.

“We have found that between the ages of 3 and 7, 60 percent of children here have anemia,” says Eblovi, a Boulder native. “If you have anemia very young, your IQ and development are much lower.”

Every night the specimens are taken to Asturias’ family home for testing. The house sits on a coffee plantation in the cool highlands, an hour from the sultry villages below.

One slide reveals four kinds of parasites. About two-thirds of all children tested have parasites, the result of poor hygiene, inadequate sanitation contaminated water.

“Parasites are something we don’t see a lot of in the U.S. They are a manifestation of poverty. And that’s why I’m here, to do a reconnaissance mission so to speak, to get the lay of the land and level of need in Guatemala,” says Gaensbauer. “Having a permanent base will be great for the community and for us. A lot of people come and go, but that is just a Band-Aid.” 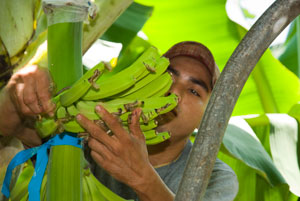 The work is exhausting yet intensely rewarding.

Mehner, from Cape Girardeau, Mo., says she hopes to eventually design aid programs around the world.

“I’d love to cure cancer but I’d also like to eradicate the things we can cure now like diarrhea,” she says. “This has made my passion stronger. Being out there every day in the heat and meeting these families helps you connect with them on a deeper level. You feel like you are part of something big, important and permanent.”

“Most people go to medical school because they want to help people, but that can get lost along the way,” he says. “This kind of experience can reinvigorate you a doctor.”

The next morning while doing physicals at a school, a child with a bleeding head wound is hustled toward the team.

Asturias lays him on a table. Children watch as he sews up the gash, nimbly assisted by Mehner, who soothes the sobbing 8-year-old.

The boy’s mother, a weary-looking woman with deep lines on her face, cautiously approaches.

“How much do I owe you?” she asks quietly.

Asturias wipes the sweat from his face and smiles.

“Absolutely nothing,” he says.