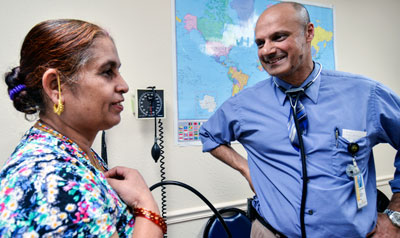 ( 2013) When medical students Lauren Wempe and Chelsea Wong wanted to learn about global health, they connected with a University of Colorado School of Medicine doctor who was leading an effort to treat refugees arriving in Colorado.

“We thought, ‘Why not stay here and do global health?’” Wong says.

So instead of going out to the world, the world came to them thanks to the Colorado Refugee Wellness Center, which opened last fall under the direction of Jamaluddin Moloo, MD, MPH, an associate professor in the Departments of Medicine and Radiology.

The center is also bringing CU students another way to learn. The medical school and other health care schools on the Anschutz Medical Campus will offer a new elective at the center; now fourth-year medical students will have the option of doing a clinical rotation in global health there—just two miles from campus.

Wong and Wempe, in their second year of medical school, will have to wait to take the course they helped create.

“It focuses on who refugees are, where they come from, the medical conditions that they face and the social determinants that impact their health and health care,” says Eva Aagaard, MD, assistant dean for Life Long Learning and former vice chair of education for the Department of Medicine.

To get the clinic rolling, Moloo cobbled together support from several sources, starting with his own Department of Medicine head, David Schwartz, MD. The clinic also relies on the Colorado Department of Public Health and Environment, the Metro Community Provider Network, the Colorado Refugee Support Program, Aurora Mental Health and more.

“The need is there,” Moloo says. “It’s a gratifying population to work with. The easy part is treating, say, diabetes. The challenge is doing that in the context of social issues that the refugees deal with: housing, employment, financial issues—all the challenges of being in a new country.”

There are more than 10 million refugees worldwide, according to the United Nations. Each year, the U.S. government decides how many and which nationalities to admit into the U.S. Colorado has taken in 39,000 refugees since 1980 and now admits about 2,500 a year, primarily from Bhutan, Burma, Burundi, Congo, Eritrea, Ethiopia, Iraq Somalia.

Refugees receive a medical evaluation before they can come to this country. Some issues, such as poorly controlled diabetes, must be dealt with as soon as they arrive. All refugees must then get a medical screening within 90 days of arrival in the U.S. for tuberculosis, HIV, intestinal parasites, hepatitis B and C, and, for children, lead. The most common medical issues include parasitic infections and musculoskeletal conditions. More than half the refugees have dental problems.

Moloo says the center, located at 1666 Elmira St. in Aurora, soon will offer primary care and become a hub for other services that help refugees in their new landscape.

Ganga Koirala, 31, a native of Bhutan and a translator at the center, knows the refugees’ stories. He grew up in refugee camps in Nepal before his family joined other relatives in Colorado. But the land of opportunity was sometimes baffling, such as when an official asked his pregnant wife whether they had a car seat.

CU medical students long have sought out this type of service. Several years ago, they launched the Student Health Refugee Elective Collaborative. They’ve developed and implemented a needs assessment of the Colorado refugee community. The medical school already offers a lecture course on refugees, also developed by students and now supported by Paritosh Kaul, MD

“This is a truly student-led initiative that has resulted in a wonderful collaboration across professional schools and with the community,” Aagaard says. “It’s a beautiful example of what can be done with teamwork among students and across programs.”