(October 2011) The patient is ready for his echocardiogram. He stands and sticks out his chest.

With her right hand, the person holding the echo probe moves it up and down over the glistening lubricant, seeking the right place for a good image.

With her left she feeds the patient a constant stream of unsalted Spanish peanuts.

So it goes when a gorilla at the Denver Zoo gets a heart checkup.

For a decade now, a team from the CU School of Medicine, University of Colorado Hospital (UCH) and other institutions gone to the zoo once or twice a year to see if its male gorillas suffer from cardiovascular conditions that sometimes afflict primates in zoos. (The extent of heart disease in wild gorillas is unknown.) It’s part of the nationwide Gorilla Health Project.

The team also looks at orangutans, which, like the gorillas in the Denver Zoo, generally check out fine on their tests. The group also has helped with cases such as on Sally, an orangutan who had a fibroid growth in her uterus. 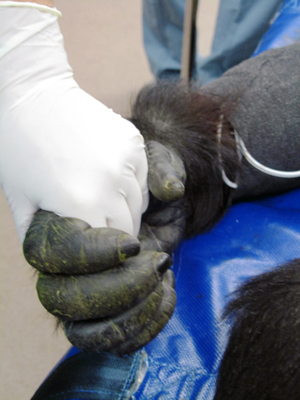 “It’s just amazing to be with these majestic animals,” says Lawrence Hergott, MD, the CU cardiology professor who organizes the team of doctors, a nurse practitioner others. “It’s almost indescribable.”

In the past, the exams were performed after the animals had been given an anesthetic. But the ketamine can raise heart rate and blood pressure.

So an awake gorilla seemed like a good thing. The challenge was to train a 400-pound creature who can crush a padlock to offer its chest, get lubricant spread on it and remain still as someone moved a probe around.

“The jelly was the hardest part of the training,” according to Jody Hodges, the head gorilla keeper. “They didn’t like it at first. They’d rub it off. But they got used to it.”

It took three months for Hodges to train the boys. She’d press a mock probe made of PVC pipe to their chests to simulate the procedure. Curtis and Charlie acclimated to the fake laptop and the extra people brought in to replicate exam conditions.

The humans also were trained—to look submissive, with eyes down and shoulders hunched.

On the big day last May, Hodges put the lubricant on Curtis. Behind her, UCH’s lead sonographer, Doris Peterson, helped Hodges position the device. Hergott was and would the results later. Then came Charlie.

“It was pretty intense,” Hodges says. “But they did . You could tell they were really proud.”
Next up? Training the boys to stick their arms into a gorilla-sized blood-pressure cuff.

The health care providers know that they, like the zoo staff, have to be careful. Once, Hergott was next to an anesthetized gorilla when it twitched.

“If he moved again,” Hergott says, “I was ready to be across town.”

The health care crew cares deeply about these patients. Peterson can name them. Hergott talks wistfully about rummaging around in an anesthetized gorilla’s mouth to coax pus out of an abscess.
“There’s a connection,” Hergott says. “It’s way more than just a fun thing to do at the zoo.”

But it is cool.

“My 5-year-old granddaughter says, ‘I’m jealous, you get to do all the fun things,’” Peterson says.

It makes sense that MDs perform the medical exams. Gorillas and orangutans are in the family of great apes—just like humans.

Hergott sometimes shows gorilla echocardiograms at conferences. The other cardiologists might notice a mild leakage of the tricuspid valve, Hergott says, but never the species. For good reason.