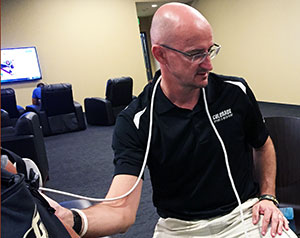 (December 2015) What do a post-race marathoner and a car accident victim lying in the intensive care unit have in common?

Due to extreme stress, both have depleted their muscles of the glycogen, or sugar (glucose), necessary to fuel energy and stave off further injury and illness. As a result, both have also begun to eat away at their own muscle.

“Your body doesn’t know whether you’re running a marathon or recovering from an accident. The metabolic and physiological response is pretty much identical” explains Iñigo San Millán, , an assistant professor in the CU School of Medicine’s Department of Physical Medicine and Rehabilitation. “The body is fighting for survival and when it runs out of glycogen, the muscle eats itself to feed itself.”

Replenish those muscles the right amount at the right time, and they can bounce back well. But overfeed them or, worse, let them starve and the consequences can be grave. The challenge for coaches, and for physicians grappling with the endemic problem of muscle-wasting in the ICU: It’s nearly impossible to know just how much muscle glycogen a person has at any given time.

That is, until now.

“We have basically developed a gas gauge” for glycogen levels, explains San Millán, describing a new, patented technology, MuscleSound, he believes could revolutionize nutrition and exercise advice for everyone from critical care patients to NFL players to everyday athletes.

Developed in 2010 by San Millán and colleague John Hill, DO, a professor in the Department of Family Medicine, MuscleSound uses ultrasound technology to provide—for the first time ever—real-time, non-invasive measurements of glycogen levels in muscle tissue. Previously, the only way to measure such levels was via a painful muscle biopsy or a costly and complicated MRI.

With this new technology, a technician moves a painless probe across large muscles in the leg or arm, emitting sound waves that bounce off the water that inevitably accompanies glycogen, indicating its presence. On a nearby computer screen, an image of the muscle appears: Dark regions indicate glycogen-loaded muscles; white spots signal a shortfall. Within 15 seconds, a computer algorithm spits out a glycogen score, from zero to 90, which doctors or coaches can use to guide advice.

Hill and San Millán invented and patented the technology in 2010 and now market it under the name MuscleSound. Today, a few NCAA teams, including the University of Colorado Buffaloes, the Dallas Mavericks professional basketball team, and the Colorado Rockies professional baseball team use it.

But some believe its most profound potential lies in helping to improve outcomes for critically ill patients.

“The era of guessing at caloric needs with equations must end,” says Paul Wischmeyer, MD, director of nutrition therapy services for the CU School of Medicine and a vocal advocate for improving ICU recovery rates nationwide. “There is a lot that we could do with this technology.”

Getting nutrition right in the ICU 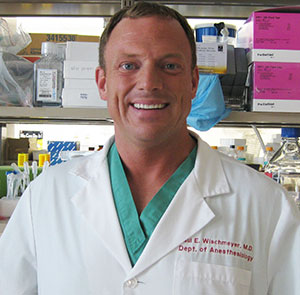 While the marathon runner and ICU patient have much in common physiologically, they differ in one key way. After crossing the finish line, the runner can go home, rest, and eat up. The ICU patient, metabolically speaking, keeps running.

“The body has not evolved to survive these types of injuries, so it doesn’t know when to turn off this response,” explains Wischmeyer, noting that critically ill patients can remain hyper-metabolic for days, or in the case of burn victims up to two years after the initial trauma. “Being in the ICU is like continuously running multiple marathons.”

Wischmeyer, Hill and San Millán recently used this novel technology to test glycogen levels of nine ICU patients, including cancer patients, burn, and accident victims who had been in one day to five weeks.

The results were even more dramatic than they’d suspected. Six out of nine patients had a score of zero (meaning they had no detectable glycogen in their muscles). The other three scored 5 to 15, far less than the 50 to 70 a person might score, or even the 15 to 25 an elite athlete might score post-competition. Some patients had lost all glycogen in their muscles within just 24 hours of admission.

That matters because, with glycogen gone, the body starts eating muscle. And the less lean muscle mass a patient has, the poorer the chance of surviving the ICU, notes San Millán.

Even if the patient does survive, it’s hard to gain back lost muscle. And prolonged muscle-wasting, or cachexia, can lead to lasting or even permanent health problems. Studies show 60 percent to 80 percent of ICU survivors suffer functional impairment or “ICU-acquired weakness” post-discharge. Some can never pick up their children or do their favorite sports again, says Wischmeyer.

“We as ICU providers have to ask the question, ‘Are we creating survivors or are we creating victims?’” he says. “It’s critical that we get it right while they are still hospitalized with us.”

This novel ultrasound technology could potentially help them get it right.

Their initial study findings, presented at the International Symposium of Critical Care and Emergency Medicine in Brussels in March, demonstrate its power as a research tool, says San Millán. He has long suspected that severe glycogen depletion was to blame for muscle-wasting in the ICU and that some patients aren’t getting enough calories via their feeding tube.

Ultimately, if ICU clinicians could measure muscle glycogen daily, physicians could better calibrate a patient’s nutrition and time any changes appropriately. There comes a time when the muscles move past the acute shock stage, begin to take up glycogen again, have the capacity to rebuild, and more aggressive feeding and physical therapy might become appropriate.

“If we intervene with a lot of calories too soon, we are fighting the body’s needed response and that can cause its own problems,” Wischmeyer says. “We have never been able to know when that transition happens. It’s measurable now.”

Wischmeyer also envisions a day when bedside muscle-glycogen testing could be used alongside ultrasound lean body mass testing to determine if, or when, an ICU patient might need anti-catabolic drugs (like beta-blockers) or anabolic agents (like oxandrolone) to boost muscle growth.

In the meantime, San Millán has already started using this ultrasound technology for a very different purpose.

Several times a week, dozens of CU Buffs football players file into his office at the new CU Sports Medicine and Performance Center in Boulder to determine just how much, or how little, they have in their muscles, and what they should do about it.

If glycogen levels look low, which can leave a player vulnerable to muscle injury, the players advised to lay off. If they look high, they might be advised to eat less to avoid weight gain. The system he and other sports medicine specialists use today is the size of a laptop and costs in the tens of thousands of dollars. But San Millán foresees an affordable, cellphone-sized device on the market for recreational runners and cyclists.

“It would enable them to dial in nutrition and workload in a way that hasn’t been possible before.”