Or the two victims of rattlesnake bites who came in within 24 hours.

Or the cactus needle stuck in a gardener’s tongue. 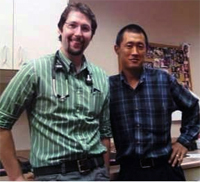 Whatever it was, third-year University of Colorado medical student Asa Ware knew he was in the right place—that place being Wray, Colo., near the border with Nebraska and Kansas. Ware was there as part of his training in the CU School of Medicine’s Rural Track.

The Rural Track is part of a push CU’s medical school and other health care programs are making to support rural health care. There are more than 13,000 doctors in Colorado. But 16 counties, all rural, have three or fewer, according to data from the Colorado Health Institute. Bent and Washington counties have none.

Ware grew up in Wray. He already was keen on rural medicine and his four weeks back home last summer "really cemented it. It reassured me that is something I’m really interested in."

By the third year of the medical school program, CU med school students serve in rural towns for up to three months. Of the first Rural Track class, which graduated last year, more than half stayed in the state for further training.

"In rural medicine, you will be truly needed and appreciated," says Mark Deutchman, MD, who practiced for a dozen years in White Salmon, Wash., and now heads the Rural Track. "You can have a rich, varied, rewarding professional and personal lifestyle." 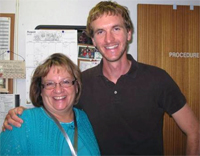 Second-year medical student Jason Yost, who grew up on a farm outside Montezuma, Kan., says the variety of experience a rural doctor gets is key for him.

"I love the scope," says Yost, who trained for a month in Cortez last summer and helped deliver a baby on his second day. "I’m a generalist. I like having my hand in a bit of everything, knowing how to treat the whole person."

Camille Allison, also a second-year medical student, recalls the guy with a deep cat bite who came into the offices where Allison was

working in Calhan, on the plains east of Colorado Springs. The cat had been caught in barbed wire. The patient decided to rescue it. Without gloves. Chomp.

"I saw a large variety of cases," Allison says with some understatement. 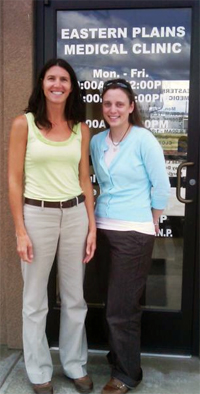 For many students, a rural community also is just a nice place to be.

"The people, the community," says Allison, who grew up near Calhan, when asked what appeals to her about rural medicine. "That’s the kind of place where I grew up. I love the people out there."

State funding for CU’s medical school has dropped by about half in the last nine years. In per-student support among public medical schools, CU is third from the bottom nationally. Partly as a result, CU’s medical students typically graduate with six-figure debt that’s higher than the national average. Rural medicine might not be a pathway to riches, even though the cost of living in rural areas is relatively low.

"I’m not a materialistic person," says Yost, who farmed his own spread before deciding at age 23 to go to college. "My idea was, ‘How can I use the skills I have to help the most people?’ It was either teaching or medicine. I chose medicine."

For students such as Ware, roots are important.

"Wray is always in the back of my mind," says Ware. "It’s a community that has given so much to me. I would love to give back in return."