A Conversation with Dennis Roop 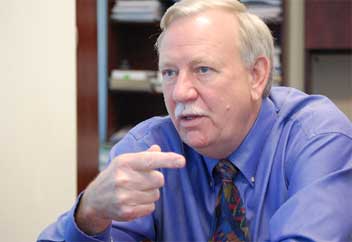 This year, the School of Medicine created the Charles C. Gates Center for Regenerative Medicine and Stem Cell Biology. The center draws on expertise from a variety of collaborative partners. It’s come a long way and has big plans. We sat down with the director, Dennis Roop, , to get the latest.

Question: When you came here to head stem cell research, what surprised you?

Roop: When I came here for the press conference in August 2006 and basically stood up and said we want to make this a world-class stem cell center, in a way it was like going into a boxing ring with one arm tied behind you. We really didn’t want to start the program on a negative note by focusing on embryonic stem cells, which are controversial in some quarters. I tried to focus on adult stem cells. But several things happened that nobody anticipated. One was the ability to reprogram adult somatic cells back into a cell that looks like an embryonic stem cell. That changed the playing field tremendously, so we could compete with institutions on the east and west coasts.

Q: Does that also mean that your program won’t be much impacted by the latest court ruling blocking of embryonic stem cell research using federal funds?

Q: What else happened that was unanticipated?

A: I found there were some unbelievably talented young people here who had cutting-edge technology, which they had used to accomplish things that investigators at Harvard and Stanford had not.

A: We have one researcher, Yosef Refaeli, who’s started a biotech company that just got a grant of about $1.6 million to work on universal donor blood stem cells. Imagine the implications of being able to generate blood!

Q: Tell me what you found when you walked in the door here.

A: (Laughs) There 10,000 feet of empty space. No equipment. No . And yet, you could feel the potential. It’s almost like I felt the frontier of science had moved. It was no longer in Houston, but Colorado.

Q: Does the "center" designation for research and treatment really matter much?

A: Absolutely. I think eventually there will be NIH funding and new resources for research. But to compete we have to have a track record. We’re in a great position because we are the only stem cell center within at least a 500-mile radius. We’re trying to make this a regional Rocky Mountain stem cell center. That plays well not only at the national level but at the local level.

Q: You’re already working with a number of other institutions, including the University of Colorado at Boulder, Colorado State University, University of Colorado Hospital, Denver Veterans Administration Medical Center, National Jewish Health, The Children’s Hospital and other branches of Anschutz Medical Campus. The program’s growing fast. More than 60 new employees since January 2007, about $50 million in funding received or pending. What’s next?

A: We will have a new fundraising campaign that will help develop a new core facility, maybe two. One of them will reprogram cells for other investigators. This would allow them to do state-of-the-art things without having to develop the expertise themselves. We’ll also have funds that members of the center can vie for on a competitive basis. It’s a way to build teams that can rapidly be competitive for much larger amounts of [outside] money.

Q: You’re collaborating with Dr. William Hiatt and the CPC [Colorado Prevention Center] on clinical trials. Talk about that.

A: This was a perfect marriage. The criticism when I first came here was that any clinical application of stem cells was still 15 to 20 years away. That’s simply not true. Bill Hiatt is already doing stemcell-based clinical trials now for patients who have peripheral artery disease or blocked arteries. And already the clinical practice of treating cancer patients is benefitting from basic research on cancer stem cells.

Q: In fact, you and Dr. Antonio Jimeno recently announced clinical trials to try to fight various kinds of cancer by going after cancer stem cells. How significant is that?

A: All you have to do is talk to some of Antonio’s patients, who basically were told, "Go home and prepare to meet your maker." They went to see Antonio and, even though they had metastatic lesions all over, some of those patients a year later are in complete remission. There’s always the possibility that the tumors will recur but at least you’ve added a year of life, maybe many years. And unlike conventional therapies that really kill everything, a scorched-earth policy, we hope the new therapies will just target the cancer stem cells.

Q: The Los Angeles Times reported in June that despite $1 billion spent on stem cell research in California, there have been no big breakthroughs. Has stemcell therapy been oversold?

A: You want to give patients hope but don’t overpromise. It’s a fine line. One of the most sobering experiences I had, not being a clinician, was when we first started working on inherited skin-blistering diseases. I went to some of the meetings of the foundations that support this research, where the patients attend. Parents are there with their little kid and saying, "How soon can you fix little Johnny?" I think all scientists should have that experience. You’ll never look at your research efforts in the same light again. You’ll see the faces of those kids and those parents and you’ll be very careful not to overpromise.

Q: What draws you to this research?

A: To see the potential, to see how fast and how far we’ve come. There’s nothing like getting up in the morning and being excited about going to work because you realize we’ve barely scratched the surface.