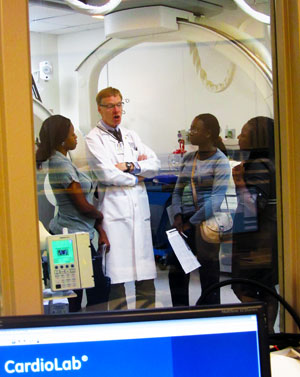 (November 2013) The cardiology trainees visiting from Zimbabwe observed with wonder as a University of Colorado Hospital patient with a heart condition was saved last summer by a small pump implanted in his aorta.

“Back home, he would have died. What is considered basic here is not available back home. Here, people don’t have to die,” Tsungai Chipamaunga says

s just a glimpse at a developing and wide-ranging partnership between the University of Zimbabwe and CU to restore the southern African country’s health care system, which has been devastated by a decade of political and economic unrest

e trainees are the second cardiology group from Zimbabwe to visit University of Colorado Hospital (UCH) and Denver Health Medical Center since 2012. At the same time, faculty members from the CU School of Medicine have been heading to Zimbabwe to review teaching methods and curriculum at University of Zimbabwe College of Health Sciences, that country’s only medical school.

“I did interviews with doctors and students,” says Steven Johnson, MD, professor of medicine and AIDS expert at UCH, who recently traveled to Zimbabwe to explore ways to improve training in rural hospitals. “They were very positive about working to make things better.”

Tom Campbell, a professor of medicine specializing in infectious diseases, and other physicians have been working on AIDS prevention and treatment in Zimbabwe for years. So when the National Institutes of Health (NIH) launched a broad initiative to address AIDS in Africa, medical leaders in Zimbabwe turned to Campbell and others at CU.

“It was an extension of what I had been doing,” says Campbell, who practices at UCH. “But also it was a great opportunity for us to enter a partnership that opens up research possibilities and gives us a chance to make an impact and to learn.”

CU is providing principal investigators for two NIH grants that are designed to improve medical education and research in Zimbabwe specifically in cardiology. 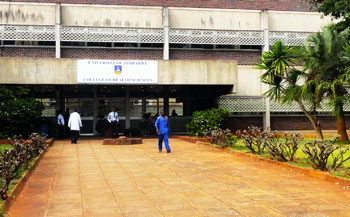 The first decade of the new millennium was a difficult time for many African countries. Zimbabwe’s health care system was hit hard. Some two-thirds of the medical school faculty had left, and enrollment declined. Doctors trained in Zimbabwe and wealthy patients departed for other countries.

Suzanne Brandenburg, a professor in the CU medical school’s Department of Medicine, has been to Zimbabwe five times primarily to teach current and future teachers. Often, she’s in a classroom or at a meeting at the local Holiday Inn talking about fundamentals: curriculum, medical ethics, professionalism, managing stress, end-of-life issues, how to give feedback to students.

“Some of the topics might seem basic,” says Brandenburg, director of the residency program for the Department of Medicine, “but those are skills and content that we teach here, too.”

Brandenburg sees hope that improving the medical education system in Zimbabwe will improve the quality of care.

“It’s hard to go on the wards and see people dying of things they would never die here,” she says.

“They are trying to rebuild,” says cardiologist Ed Havranek, MD, a CU professor of medicine who practices at Denver Health. “We see it as a place with tremendous strength.”

The Evaluation Center of CU’s School of Education and Human Development is tracking the progress of these efforts and there are signs of improvement. Enrollment is increasing and more undergraduate students say they plan to remain in the country

s spring, Johnson made his first foray to rural Zimbabwe, where medical students must train. Living conditions for trainees are “meager,” he says. The living quarters are in “relative disrepair,” sometimes with pieces of the ceiling missing, Johnson says, and students say the plumbing and kitchen appliances often are broken.

Ryan Webb, MD, a third-year resident in internal medicine and chief medical resident at the Veterans Affairs Medical Center in Denver, spent three weeks at the medical school in Harare last summer to explore an exchange program with internal medicine residents there

b says the learning goes both ways. “I did not want to swoop in and be the American who dictates how things go. I did a lot of listening.”

Webb says he learned how doctors and students there, lacking the advanced medical equipment common in the United States, were extraordinarily skilled at physical exams

d what do the Zimbabweans make of these Coloradans?

“Maybe,” Chipamaunga says, “there are people driven to be part of something bigger than themselves.”