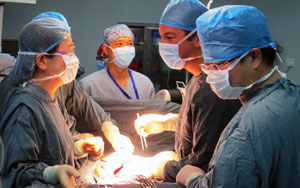 (May 2013) As Chinese string music wafts through the operating theater, Barish Edil, MD, swiftly searches the open abdomen for the patient’s diseased pancreas.

The University of Colorado School of Medicine surgeon works in tandem with Yulian Wu, MD, his Chinese counterpart, both silently anticipating the other’s move.

“If you were at my hospital, you’d have more experience in this kind of surgery than any of my colleagues,” he tells her.

“We have a lot of experience with this operation,” she says, “but we would like to learn some of your new techniques.”

Dozens of physicians watch on a monitor from a nearby auditorium.

Edil and Wu are doing a Whipple procedure, a complex surgery usually reserved for pancreatic cancer patients whose prognosis without it is poor.

They painstakingly remove the duodenum, gallbladder part of the stomach. Then reconnect what is left to form a working digestive system.

“I love this stuff,” a buoyant Edil declares, as he snips and sutures. “This is what I live for.”

It is November and Edil is in Hangzhou, China—a fabled city of tea fields, mountains and pagodas located 100 miles southwest of Shanghai—to sign a memorandum of understanding between the CU School of Medicine and the Zhejiang University College of Medicine, one of China’s premier medical institutions.

The agreement calls for physician exchanges and shared research opportunities. CU faculty can work in Hangzhou where the patient volume is much higher. They can treat conditions that are more prevalent in China than the U.S., like stomach cancer and liver tumors.

“They will gain a lot of experience quickly with those diseases,” says Ting-Bo Liang, MD, vice president of the Second Affiliated Hospital of Zhejiang University College of Medicine, where Edil did the surgery. “Researchers at CU will have many more patients to draw from for their studies.”

At the same time, one of Zhejiang’s doctors, Jiant Tao Li, is expected at the CU School of Medicine this year where he will be the first physician in China to learn the laparoscopic Whipple.

The revolutionary technique, which Edil helped pioneer, doesn’t require major surgery as does the standard Whipple. It also has infection, mortality and internal bleeding rates.

“I hope to learn Dr. Edil’s laparoscopic expertise,” Li says. “His technique is micro-invasive and the patient can recover very quickly.”

On his first day at the Hangzhou hospital, Edil sits in a crowded room listening to pancreatic cancer cases.

In one instance, while examining a scan, he spots a malignant tumor in an awkward spot.

“That would be a challenging operation,” he tells the group, “the kind of operation that keeps me up at night.”

After an hour, he and his Chinese colleagues make rounds on the ward. There are eight patients to a room. Nurses wear crisp uniforms and the sort of stiff white hats long discarded in the U.S. Curious pedestrians walking through a busy alley occasionally poke their heads through open windows for a look.

One patient asks if Edil will ‘be my operator’ for her surgery.

Edil notes how thin the Chinese are compared to Americans, making operations easier and less traumatic.

“The difference is remarkable,” he says.

Later, while dining on braised duck tongues, stewed jellyfish and sea cucumber with his Chinese colleagues, Edil describes the new collaboration as “the purest form of exchange.”

“There are no strings attached—only that we both learn from each other,” he says.

Edil specializes in pancreatic cancer, one of the deadliest forms of the disease that rarely shows symptoms until it’s already spread.

“I think everyone working in cancer medicine does so for different reasons,” he says. “Some do it for a family reason—perhaps a relative had cancer. Some do it for the challenge. I just like . When I see them they are at their lowest point and view me as the person who will see them through this darkness. I take that responsibility seriously.”

Edil has started a new program at the University of Colorado Hospital for pancreatic cancer patients that he calls a “paradigm shift” in treating the disease. Rather than making patients wait weeks or months between diagnosis and treatment, they can complete their tests in a single day. Then a team of 20 doctors and health care professionals decide the best treatment plan.

“We are the only institution in the nation where every pancreatic cancer patient gets this level of attention,” he says. “We think this is the start of a new kind of cancer care.”

The next morning in Hangzhou, dignitaries from the hospital, university the community assemble to witness the MOU signing ceremony. Local media jostle for prime camera spots.

“We are pleased to collaborate with a world-class hospital like the University of Colorado, which has a high reputation in the U.S.,” Ting-Bo Liang tells the audience. “This is a great moment and from here we will go on to a brighter future.”

Edil steps to the microphone saying that the “future is bright and I believe we will remain friends for years to come.”

“We hope to set up joint training programs,” he says. “We can start with pancreatic disease and branch out from there. Our doctors can learn new skills at CU and your doctors can come here to give lectures, presentations and see a higher volume of patients than they can in the U.S.”

After a week in Hangzhou, Edil describes his visit as both “” and “.”

“I came away extremely impressed,” he says. “This world is getting smaller every day, and in order to flourish we need to reach out to others to take the best advantage of it.”