"This Has Always Been My Dream" 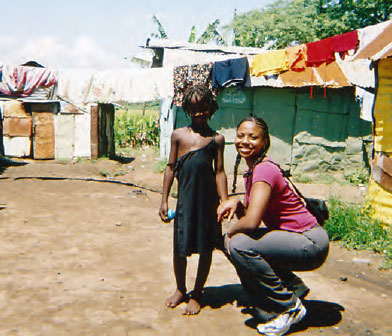 It was career day in Sister Shiela class. The mother of one of the other students at St. Catherine-St. Lucy Elementary School was speaking.

"You can be all you can be," the woman said, not just in the Army, which used that slogan then, but in any job. She named several career paths. When she said "doctor," Vernesha heard the call.

"Yes!" she remembers saying to herself. "That is what I can do."

And she did. Vernesha Montgomery—she’s married now—graduated from the Loyola University Chicago Stritch School of Medicine.

Today, Dr. Montgomery is in her first year of residency with the University of Colorado School of Medicine.

As a she’s worked at The Children’s Hospital, Swedish Medical Center in Englewood and Denver Health. In her second she plans on serving in rural communities. She’s focusing on family medicine, with plans to practice in medically underserved urban areas.

Montgomery is the first member of her family to attend college. She grew up on Chicago’s West Side in a family that wasn’t always together and wasn’t always employed. "We were modest," says her sister, Williams.

Montgomery rode buses 45 minutes to and from a "magnet" high school on the north side. She also participated in the Black Student Union and pep squad; she taught piano and sang in a gospel choir that met before school at 7 a.m.

"Motivated," says of Montgomery. "From early on, she wanted to be something great. She would try to figure things out and make them work."

remembers that her sister always made honor roll for good grades. Then, horrors, she got a B in something.

"She was so down on herself!" says with a laugh. "I said, ‘Hey, you’re still on the honor roll!’ But she had such a drive to succeed."

Medicine seemed a good fit for the girl whose family called her Nesha. She loved math and science. Her mother was a receptionist at a hospital. Her dad worked first in a hospital cafeteria, then as a hospital security guard.

"Because so many people around me worked in a hospital setting, it seemed like a natural progression," Montgomery says.

The girls were raised with a strong social conscience.

"We had some struggles growing up," says, "but our parents taught us to sacrifice for others. We were raised in the church, so we would volunteer to do anything."

So Montgomery went to college—Northwestern University, just north of Chicago—with the goal of becoming a physician. Then came medical school at Loyola. Higher education tested her.

"There were challenges," she says. "You are with people who are the cream of the crop. Everybody there was at the top of their class."

At Loyola, another challenge arose. Her grandfather became ill with prostate cancer and Alzheimer’s. Montgomery took time off from school to help care for him at home. To help pay the bills, she worked at Macy’s as a skin-care consultant. After his death, she returned to school.

Montgomery credits college students who mentored and encouraged her while she was in high school with helping her stay on track.

In medical school she returned the favor, returning to the West Side to teach science and offer career counseling to middle-schoolers. She led coat and food drives for Chicago’s homeless. She joined a Loyola program to give medical care to the poor in the Dominican Republic.

She’s still working that education theme. Montgomery says her nephews "hate to see me because I always hound them about homework and future goals." says her sister helped inspire her to go to school for a teaching degree.

Her parents, Montgomery says, "were always supportive and they are extremely proud." Anyone they meet "knows my whole life story."

She and her husband Derrick Montgomery, MD, an Air Force ophthalmologist, live in Castle Rock, Colo.

Montgomery’s still singing, now with a multiracial choir called the Spirituals Project. When she uncorks that soprano voice, there’s a lot behind it. "When I sing," she says, "I feel like I am ministering God’s word through song."

Her first child, Victoria, was born in March 2009.

It’s been a long journey for the girl who felt her world open up in fourth grade.

"It feels kind of surreal," Montgomery says. "I go to work every day more motivated to learn. This has always been my dream."

Montgomery plans to practice in an urban area, helping people get better access to health care.

"I’m a city girl at heart," Montgomery says. "So that’s the most comfortable setting. And these communities have a great need for primary-care physicians. I want to encourage preventive medicine and to continue to raise awareness about health-care issues that can be easily avoided. "