Untangling the Secrets of RNA Form and Function

Biochemist Jeffrey Kieft on understanding how viruses hijack the cell

(May 201 8) Biochemist and structural biologist Jeffrey Kieft sees promise and beauty in the tangles of an RNA molecule and limitless potential for exploration.

“The primary focus of my lab‘s research has been RNA molecules of viral origin and there are a few reasons for that,” said Kieft, , professor and vice chair in the Department of Biochemistry and Molecular Genetics and part of the RNA BioScience Initiative in the CU School of Medicine. “Of course, viruses make people sick and we want to make a difference in treating deadly viral infections. In fact, there are projects in my lab that are moving towards translating our basic science discoveries into new therapies.

“But also, studying viral RNAs teaches us so much about basic biological processes. The sheer number and diversity of viruses lost on most people. It’s estimated that there are 10 to the 37th individual viral particles on Earth at this moment. That’s more stars are in the universe, and we know almost nothing about most of them.”

As if such an expansive universe of material to study isn’t daunting enough, consider an RNA molecule itself. It twists and turns and flexes and folds and moves and stacks itself and does a dance that dictates what it does and how it fulfills its function.

“The overarching questions that have driven my research are ‘How is RNA able to assume so many complex three-dimensional folds? What are those folds? How do they drive function? And then, of course, how does that relate to health and disease? Can we exploit that knowledge to make a difference in the world?’”

But wait, it gets more complicated in ways that raise even more questions. The RNA molecule, complex in structure and surprisingly diverse in function, is based on a simpler set of building blocks.

“What got me fascinated by this molecule is the idea that RNA is chemically less diverse than proteins,” Kieft said. “It only has four bases as opposed to the 20 amino acids in proteins, but it’s arguably more diverse in terms of its function in the cell. It can store genetic information, it can do catalysis, it is part of many dynamic and large macromolecular machines, it regulates gene expression using many different mechanisms, etc. So that’s a paradox: How is something that is less chemically diverse more functionally diverse?”

Kieft’s lab on the Anschutz Medical Campus is studying these questions and more in an attempt to understand how viruses take over a cell’s machinery.

“Viruses are obligate intracellular parasites in that they can’t reproduce on their own. They have to invade a cell and many of them use structured RNA in very elegant ways as part of their strategy to hijack the cell’s machinery; they turn what is normally machinery the cell that is using to stay alive and turn it into virus-making machinery.”

Kieft graduated from the U.S. Military Academy at West Point in 1990 and served as an army officer in Germany. Throughout his time in the military, he said, he spent time reading science books.

“I’ll admit that as an undergraduate, I never took a biochemistry course. I was drawn to physical chemistry. I liked numbers and quantitative measurements of thermodynamics and kinetics, but then I realized I could use physical chemistry to study the complexity of biology. In the end, biology is a big physical chemistry process and I think it can be broken down and understood at that level.”

Even today, he still describes the effort to understand the RNA in terms of a battle. “There was a great review that was written by Bryan Cullen a little under 10 years ago, called ‘Viral RNAs: Lessons from the Enemy,’” he said. “I’ve always liked that because it illustrates how viruses cause diseases that we want to stop, but also how they can teach us things about basic cellular processes and also how we might use viral RNAs as the basis for new treatments to diverse ailments. I wish I had thought of that title.”

After leaving active duty, Kieft went to graduate school at the University of California Berkeley, where his adviser described the potential in studying RNA. “He said these molecules fold up just like proteins, but we know almost nothing about how that works. We just haven’t seen enough structures. At that minute I was hooked.”

Kieft did postdoctoral work at Yale University. In 2001 he was awarded the Roger Revelle/AAAS Fellowship in Global Stewardship, working as a member of the White House Office of Science and Technology Policy for a year before joining the CU faculty, where he was also an Early Career Scientist of the Howard Hughes Medical Institute.

He joined the CU School of Medicine just prior to its move to Aurora and the Anschutz Medical Campus and part of the pitch to bring him here was to put a hard hat on his head and give him a tour of the construction zone.

Still, more than a decade later, the building work goes on because there are always new tools that make it possible to learn more. Kieft spearheaded the effort to build the campus’ new cryo-electron microscopy facility and he now directs the CU School of Medicine’s Structural Biology and Biophysics Core Facilities (cryo-EM, X-ray crystallography, NMR, metabolomics, proteomics, biophysics peptide cores). These core facilities require a significant expense to keep them functioning, but it’s essential to have the ability “to look directly at the molecules of life and their interactions at this level and to understand the structures of macromolecular machines and their changes.” 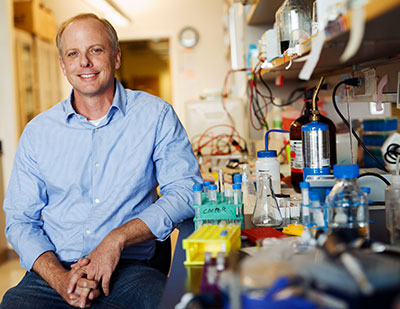 “Sometimes when people who are not involved in this type of research see the cost of the facilities and equipment, their eyebrows go up and they say, ‘Why are we spending so much on this?’” he said. “My answer is: that’s what it takes if you are going to be on the cutting edge of these molecular if you want to understand the basic molecular underpinnings of disease and really get at the mechanisms involved. There really is no other way to get this information.”

CU researchers could try to conduct this work to facilities at other universities where charges will be higher and the work will be a lower priority than the home-grown research being conducted at those schools. However, Kieft believes the CU School of Medicine can be and should be a national leader in this research and that there are tremendous opportunities for collaborations combining molecular studies with more clinically-focused research on campus.

“You look at those up-front costs and say, ‘Wow that’s expensive,’ but these shared resources make us competitive for research dollars that require this sort of equipment. Awarded grants then help pay for these resources, and they lead to new research projects and collaborations. Sustained investments can create an upward cycle.” Kieft said. “I want researchers here to be able to do the same science that is being done at the top research institutions in the world. I want to see new collaborations forged on our campus and want to make these technologies available to the greater campus community.”

The science being conducted by Kieft and his colleagues on campus is on critical issues for human health and has been featured in high-profile journals, such as Cell, Science, Nature, Nature Structural and Molecular Biology, Proceedings of the National Academy of Sciences, Nature Communications, and eLife.

“We’re studying RNAs from the flaviviruses, which include Zika and dengue and many, many others, like Hepatitis C virus. We’ve just started a project as part of a multi-University team to do some work on Ebola. We’ve got a project. We also study viral RNAs that come from more unusual viruses like some that infect plants. I realize some might think ‘Why are you studying plant viruses at a medical school?’ The truth is there are interesting RNAs that these viruses produce and we can learn a lot of fundamental, basic biology by studying them. Even though right now a particular RNA and a particular phenomenon may have only been found in a virus infects plants, it probably exists somewhere else…we just haven’t found it yet.”

There is abundant common ground for research projects. Kieft cited the Zika virus as an example.

“When we got to the point of working on Zika, I talked several times with David Beckham, who is an infectious disease expert here on campus. He’s working on Zika as well, but he is an MD who spends time in the clinic. His perspective and experience with these viruses very different from mine.

“In my lab, we are more reductionist; we are biochemists looking at individual RNA molecules and he’s doing infections in mice, so we realized we can start asking and attacking important questions in different, but complementary ways. Opportunities just sprang up immediately.”

Kieft and Beckham have several trainees who can take advantage of the experiences of both labs and share ideas and data. This extends beyond research on Zika. “Zoe O’Donoghue is a graduate student in my lab whose Dengue virus research benefits from this sort of cooperation: she can move easily between our labs. Ben Akiyama is a post-doc that is accessing the expertise of the Beckham Lab as well. It’s great because we all learn from one another, we can share ideas, we can contribute to the training of each other’s lab members, and we can support each other’s grant applications.”