'It Was The Most Rewarding Time In My Orthopedic Career'

(November 2016) Evenings were the hardest time. 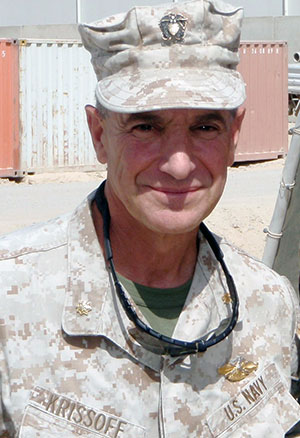 At his orthopedic practice in Truckee, Calif., Bill Krissoff, MD, could immerse himself in his patients’ injuries. But thoughts of his son, Nate, were never far away.

Nate Krissoff, a musician and athlete with a love of poetry, enlisted in the Marine Corps after the attacks of Sept. 11, 2001. In December 2006, three months after arriving in Fallujah, Iraq, he was killed by a roadside bomb.

“I didn’t have problems operating or seeing patients, as I thought I might,” Bill Krissoff says. “But time in the evening was tough for both my wife and me. Things quiet down and you have the chance to feel the loss.”

The disconnect crystalized one day when a patient came in with a common complaint: a knee injury that was hindering his enjoyment of running.

“He said he couldn’t run a full marathon – only 22 miles … We talked quite a while, but when I finished seeing him I thought ‘This just really isn’t that important in the great spectrum of things.’”

At that moment, the path to a late-life Navy career began.

Krissoff, a 1972 graduate of CU School of Medicine who was recognized in May by the CU School of Medicine Alumni Office with the Silver & Gold Award,considered other options like international aid work and public health, but his career change became clear on a hike near Tahoe with Lt. Col. William Seely, Nate’s commanding officer in Iraq, who was touring the country visiting families of those killed under his command.

asked about medical care for Marines on deployment, and Seely told him about the Navy battalion surgeons who are always with the troops.

“I thought that was what I wanted to do – a Navy doc caring for Marines in combat,” Krissoff says.

A second visit, this one from George W. Bush in August 2007, got the wheels moving. had already talked to a Navy recruiter, who told him that he would need an age waiver to enlist and that would be unlikely at his age – 60.

So when Krissoff, his wife, Christine, and younger son and Marine officer, Austin, were invited to meet with the president, who was visiting families of the fallen, he decided to make his move.

“At the end of the he asked if he could do anything for the families. I was the last to speak and I told him I wanted to join the Navy Medical Corps, but I had been told I was too old.

“He looked right at my wife and asked what she thought. He clearly did not want to get into the middle of this. He also asked Austin, who was visiting from Camp Pendleton. Austin was a little skeptical but he thought his dad would probably do fine.”

Bush said he would see what he could do.

Two days later the Navy recruiter called. “He was kind of laughing and said he had my age waiver.”

Interviews and background checks flew by and on Nov. 17, 2007, a little less than a year after his son was killed, Krissoff was commissioned a lieutenant commander in the Navy Medical Corps. 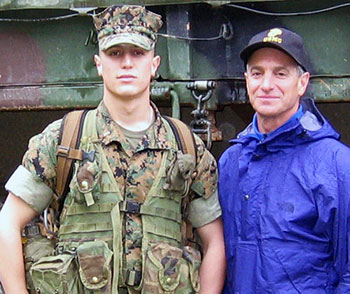 What would compel a 61-year-old civilian physician to walk away from a thriving orthopedic practice in a beautiful part of the country to join the Navy?

“I think in most families Dad inspires sons,” Krissoff says. “In our case, sons have inspired Dad. I was ready to put on a uniform and serve.”

Put simply, he says, he wanted to take care of injured Marines, sailors and soldiers.

“My son Austin and I decided we were going to complete Nate’s unfinished work,” he says.

His family understood, as did a couple of close friends. A fellow physician and Navy veteran cautioned against it. (“He told me I was crazy. Absolutely nuts.”)

But an interesting thing happened during his training and deployments. He kept running into Nate - by way of those who knew him.

The trend started in Okinawa. Nate had trained at Camp Schwab. Krissoff was stationed nearby, so he stopped in, hoping to find people who knew his son.

He did. And, bonus, others knew Austin.

“It was very ironic that my training took me there. How unlikely was that? The chances of that happening are virtually nil.”

It kept happening. Krissoff was deployed near Fallujah in February 2009 at the same time as Austin, who put his dad in touch with Marines who’d known Nate.

A deployment to Afghanistan in February 2010 repeated the pattern.

“I wouldn’t go a week in the chow hall without someone seeing my name tag and telling me he was deployed with Nate or Austin. They always wanted to share something about one of them that stuck with them. What they remembered about training, what music they liked. Nate had a good secret life he didn’t tell Mom and Dad about – his nights out on the town with other Marines. I heard a small portion of that.”

knew Marines were tight, but now he was part of their family.

“I didn’t have to explain myself to Navy doctors or the Marines I worked with. They were just happy to have me on board. I was never marginalized.”

He felt closer to Nate, knowing that he was sharing many similar deployment experiences. The seven-month tour in Afghanistan was intense – Krissoff was primary surgeon or assistant on 225 trauma surgeries.

“We just did not stop. We worked. Then we ate and slept and worked some more. We were totally focused on taking care of Marines and Afghans. We took whoever came.

“It was the most rewarding time in my orthopedic career.”

Krissoff was 67 when his age waiver ran out.

Promoted to commander, he was offered another deployment, but six years seemed like enough.

“I certainly did not expect to be that active in orthopedic surgery well into my 60s. But I wouldn’t trade it for anything. It was an honor and privilege to serve.”

Now 70 years old and retired, he is doing the things he has always enjoyed – reading, skiing, traveling and kayaking. But he spends time with Marines, too. The day after an interview for this story in late July he planned to go on a rafting trip down the Grand Canyon with injured Marines.

He has fielded several calls from older physicians who want to join the military. He is encouraging but makes sure they understand what they’re getting into.

“If you deploy, the physical challenges are significant. You’re not just doing medicine. You are living in an austere environment. I slept for months on a cot in a tent with nine other surgeons. It’s not for everyone. There’s nothing normal about deployment.

“I think that’s what my Navy colleague was thinking when he discouraged me. He wanted to make sure I really understood deployment medicine. You might like the outdoors but this is entirely different.”

In an interview for a civilian publication, a reporter asked Krissoff if he was seeking closure through enlisting.

“Actually, closure is really for those who have never lost a son or a daughter. That’s a cliché. It doesn’t have anything to do with reality. Losing a child means your family is changed forever.”