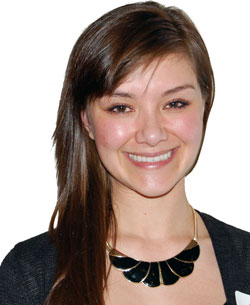 ( 2013)  Shauna Seaman knew from a young age that she wanted to be a doctor, but she didn’t have many role models who could show her the path to medical school.

Neither of her parents went to college and her extended family members were far from her Aurora home; her mom’s family is in Vietnam, her is in Indiana.

“I always had an interest in science and was good at it,” Seaman says. “So I thought about what I could do. Teaching was an option, but being a physician was right for me.”

As Seaman, 27, wraps up her final year at the University of Colorado School of Medicine, she is compiling a history of the mentoring program that helped guide her steps through medical school.

“I always felt that the Office of Diversity provided me with so much as far as experience, encouragement, role models, resources, that it was the thing that opened the doors for me to pursue medical school,” Seaman says. “And now that I am in medical school, I feel the importance and the need to give back to them.”

As a mentored scholarly activity, Seaman is assembling a poster presentation on the Student National Medical Association (SNMA), which has existed as a national group since 1964, although the Colorado chapter wasn’t established until 2001.

“I found that people who were not involved don’t have any idea what SNMA is,” Seaman says.

And those who were involved ultimately leave campus, taking with them the knowledge and experience that future leaders of the organization could use.

“When people graduate, part of the history gets lost,” she says.

Preserving the SNMA chapter’s history is important because it has been instrumental in updating the face of medicine nationally, and it has been a contributing force at the School of Medicine; SNMA works to increase minority enrollment in medical schools via mentoring programs for students from elementary school through college.

In 2004, the Sullivan Commission on Diversity in the Healthcare Workforce found a nationwide shortage of professionals from diverse backgrounds. The commission reported that the nation’s medical school graduating classes for 2007 included only 2,197 black, Hispanic and Native Americans out of a total of more than 16,000 students.

Just 8 percent of the students in Seaman’s class of 2013 are from backgrounds underrepresented in medicine, compared with 39 percent in the School of Medicine’s class of 2016.

As a biology major at CU Denver, Seaman found role models and received practical experience when she was part of the School of Medicine’s Undergraduate Pre-Health Program, which began in 2006. She smiles describing it: “We shadowed physicians and had discussions about minorities in medicine. We performed cow eyeball dissections and we learned how to suture up pigs’ feet.”

Dominic Martinez, senior director of the Office of Diversity at the Anschutz Medical Campus, says Seaman has become a role model herself.

“She’s a natural-born leader and a great resource for the Colorado community,” Martinez says.

While in school Seaman served as her class’ diversity representative all four years and served a term as the SNMA chapter’s co-president.

In 2010, Seaman helped organize a regional conference that brought approximately 200 college students to the Anschutz Medical Campus for an intensive medical school prep program. That conference was part of an SNMA program called Minority Association for Pre-medical Students.

Seaman says attendees could take practice tests, participate in mock interviews, network with fellow students and even get “dress-for-success” wardrobe advice at a runway show.

Seeing prospective students on campus reminded Seaman how fleeting her time on campus has been and how important to her it is to preserve the SNMA history.

“I was thinking about how fast it went by. I can still remember what I wore, what I said, where I was. I can’t believe four years went by so fast.”