Standing on Both Sides of the Examination Table 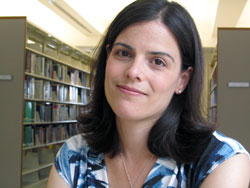 (November 2012) Sara Selig was in her final year of medical school at CU when her husband, Gregg Stracks, came back from a run complaining that the road had seemed “wavy.”

An eye specialist took a look.

“I had never heard of ocular melanoma,” says Selig, who graduated from the School of Medicine in 2007

d so began a courageous, challenging journey for Selig, then 29, and her 34-year-old husband. At a time when she should have been celebrating her marriage and her residency at Harvard’s teaching affiliate, Brigham and Women’s Hospital, Selig had to live on both sides of the exam room

e was a doctor. And she was the spouse of a cancer patient.

Selig winces when she says it, but she and Gregg met on J-Date, an online service for Jewish singles. Her grandmother staked her to the $19.99 it cost to sign up. She and Gregg found each other quickly.

Within a year of meeting Gregg, she took time off from medical school to go to Kenya on a Fogarty-Ellison Fellowship. She was part of a clinical research team in Nairobi, caring for and researching HIV-infected children and their families. Gregg, with his University of Denver doctorate in psychology, accompanied her to Kenya, where he applied his skills to improve the psychosocial care of children and families affected by HIV/AIDS.

When she returned to medical school two years later, Selig spent part of her final year working in a hospital on the Navajo reservation, which she has continued in residency.

“I was always interested in global health,” she says. “My idea of global health includes my own backyard.”
Then came the mixed messages of the wavy road and the Harvard acceptance. In Boston, within a year, had metastasized to Gregg’s liver. Doctors gave him maybe six months to live.

Ocular melanoma is rare enough that the -Selig team had to do a lot of the work on their own.
“If a doctor says, ‘I can’t offer you anything,’ that’s not good enough,” Selig says. “We wouldn’t accept that.”

Along the way, the couple Community United for Research and Education of Ocular Melanoma, or CURE OM, an initiative of the Melanoma Research Foundation. The purpose: “To increase awareness, education, treatment and research funding of ocular melanoma.”

That refusal to quit, which Sara and Gregg shared, bought time. The young man who had been given six months battled for four years, passing away in January 2012. Five years after medical school, at 35, Selig was a widow.

At a recent fundraising event in Denver that Selig helped organize, several OM patients were honored. One of those awards was given posthumously. It went to Gregg Stracks.

“I know we won so many battles in between Gregg’s diagnosis and his passing,” says Selig, who grew up in Denver. “I have no doubt that we will win many more battles against this disease.”

Now this recent CU graduate, who completed her residency in June and soon will receive a master’s degree in public health, has to figure out what to do next. Some things, she knows. She’ll continue the OM work. She will be physician at Brigham and Women’s Hospital, Division of Global Health Equity and an instructor at Harvard Medical School

l try to embody the lessons of her experiences, including the kindness Hovland, a volunteer faculty member with CU, showed her and Gregg

o much has happened for anyone to be surefooted again quickly.

But Selig is getting good advice, even if it is unspoken.

“Gregg would tell me to go right on, go have an impact, go change the world,” Selig says. “That’s who he fell in love with. I think I’ll be able to do that in time. I want to be that person again, and I’ll take all of my experiences, and Gregg, with me.”