'One Generation Removed from Poverty'

Rupinder Legha Works with the Underserved 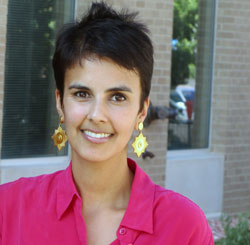 (November 2012) Rupinder Legha, MD, always had the inclination to help people. But it wasn’t until she traveled to India, where her parents are from, that her predisposition really sank in.

“It was seeing how different my dad’s life had been,” she says. “I’m one generation removed from poverty. I am aware of how lucky I am and aware of how limited the resources are for others.”

Now a fourth-year resident in psychiatry at the University of Colorado School of Medicine, Legha—“Rupi” to her friends—is bringing that awareness to medicine. She hopes to achieve what she had seen in her oncologist father’s practice: “A real potential to change people’s lives.”

After graduating from Duke University and Harvard Medical School, Legha was drawn to the work being done by members of the CU medical school’s Department of Psychiatry at the Centers for American Indian and Alaska Native Health.

“I feel very lucky to be here,” Legha says. “My education has been world class and CU is a continuation of that.”

Motivated by that early drive to help, she is working on two projects. One is a psychiatry clinic for refugees, held at the Anschutz Medical Campus.

Take the usual strains of life and illness. Add the horrors of war and oppression in Iraq, Iran, Afghanistan some African countries. Mix in the baffling bureaucracy, culture language of a new country and you get the trauma, depression and post-traumatic stress disorder Legha sees in many of her patients.
“For them,” she says, “coming to this country can feel like coming to a different planet.”

It was on a Fulbright scholarship, teaching English in South Korea where Legha learned firsthand the challenges of arriving in a new country and learning a new culture and language. “As the daughter of South Asian immigrants, I had some understanding of what it means to immigrate to a new land. But experiencing it firsthand gave me a deeper appreciation.”

“I can help by just being there and listening and talking,” she says. “I’ve had patients who experienced unbelievable trauma. Hearing it, sharing in the grief and sadness, I think that is invaluable to people because they don’t have to do it alone. At least for an hour.”

“Large-scale social factors shape the progression and outcome of illness and disease,” she says. “As a physician, I feel responsible for addressing those social factors to provide meaningful treatment. For me, that means helping people get housing, get vocational rehab, making sure their food stamps are in place.”

She says she’s made maybe 10 phone calls to ensure that a patient could get her prescription. Not only does that solve a medical problem, Legha says, “it shows people how to traverse barriers on their own.”

Legha’s other big CU project involves bringing “telepsychiatry” to Native American communities with limited and evaluating its success. The program, which links patients to psychiatrists electronically, is run by doctors Douglas Novins, a professor at the medical school, and Jay Shore, an associate professor

e challenges in Native American communities can be great because of poverty, isolation and cultural differences, she says, “but the strengths and resiliency and culture in these communities are inspiring.”
Part of this effort involves trying to weave western practices with approaches drawing upon traditional Native American healing. Legha and Novins published a paper in July 2012 in Psychiatric Services on the role of culture in substance abuse treatment programs serving these communities.

“A lot of the issues in these communities are related to rural health,” she says. “There are places where there are only a handful of psychiatrists in the state. People have to travel hours to get to a psychiatrist. Studies have shown telepsychiatry makes a difference.”

Baseline data may be sketchy. Legha’s analysis of this program will help provide a more solid statistical foundation to support this work. But Legha says there’s another way to gauge success.

“Success,” she says, “is spelled out if communities, including local providers, tell us it’s worthwhile.”