From Saddle Bronc to Surgeon 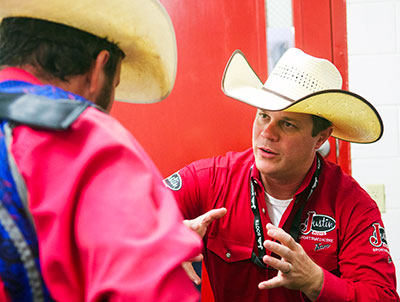 After waiting a couple of beats to see if the cowboy can get to his feet by himself, Stoneback sprints into the arena and kneels down to check for injuries.

A few minutes later, while Stoneback is examining the rider in a big red Justin Sports Medicine trailer that’s parked behind the chutes, a debate develops about exactly what happened in the arena.

“You were kicked by the pickup horse,” one physical trainer tells the cowboy.

“No, you slammed into the pickup horse,” another insists.

Stoneback settles it to everyone's satisfaction.

"You got ricocheted around out there," he says.

Stoneback is somewhat of an expert on the subject of ricocheting; the permanent hoofmark on the back of his leg proves it.

Now an orthopedic traumatologist, Stoneback worked through his undergraduate years at Middle Tennessee State University by competing in the National Intercollegiate Rodeo Association and by breaking and training horses. 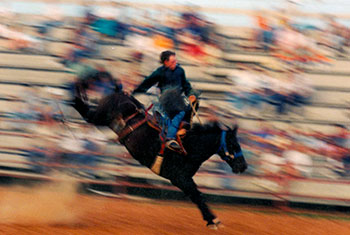 “I wanted a flexible job,” he explains. “It was the best college job ever.”

Stoneback grew up around horses so going into rodeo made sense. He started by riding bulls (that’s how he got the dent in his leg), then picked up saddle bronc to become an all-around cowboy. He loved the camaraderie and the friendliness of the competition.

“I won several buckles and competed in a lot of rodeos for five or six years. Then at some I decided I wanted to go to medical school to be a surgeon. I tried to quit to keep myself healthy, but basically, for lack of a better term, I relapsed in my first year of medical school.”

Finally weaned from rodeo by his second year at University of Tennessee College of Medicine, Stoneback concentrated on medical school, then did his residency at of Colorado Hospital. When he and his wife Gin Stoneback, who was Miss Rodeo Tennessee 2000, returned to Colorado after his fellowship at St. Louis University, they settled in Weld County where they could have horses.

Bull riding and saddle bronc were out of the question at that point so he and his wife, who until recently was events and program coordinator for the School of Medicine’s Department of Orthopedics, took up team roping.

But the Stonebacks missed the people and lifestyle. So when Justin Sports Medicine Team approached him about volunteering as a physician during professional rodeo events like the Greeley Stampede and the National Western Stock Show, Stoneback jumped at the chance.

“It’s a very tight-knit community,” he says. “Very social. It’s a real privilege to be part of it.”

n Stoneback often attends with her husband so she can spend time with old friends and learn from professional team ropers.

“Most of our friends aren’t Facebook people,” she says. “So I catch up on them and their kids.”

Stoneback’s background gives him a unique perspective into competitors’ mindset. He knows that small injuries aren’t going to stop a rider from moving on to the next rodeo.

“Where are you going next?” he asks one cowboy at the Greeley Stampede as trainers strap a large icepack to his lower back.

Stoneback nods, his unflappable manner matching that of his patients. He understands how important each rodeo can be to a rider’s overall standings.

“I know how to talk to them. I know what they’re thinking. I’ll ask them where the next rodeo is, how important it is. That’s the kind of conversation they can’t have with just any doctor. 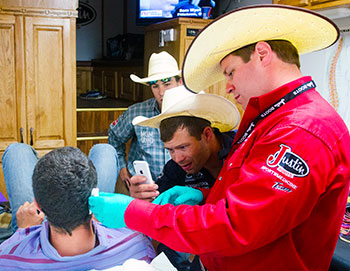 “I rarely say they shouldn’t do it. I just weigh the risks and benefits with them.”

Missing a rodeo event can damage more than their standings. Though many have health insurance through Professional Bull Riders and Professional Rodeo Cowboys Association, “it’s not like there’s a desk job they can go to. If they aren’t in the saddle working, they aren’t making money.”

Leaving rodeo behind was a hard personal decision for Stoneback but he chose a medical specialty that mirrors some of the excitement and uses many of the same skills.

“When you’re on a 1,200-pound horse or a 2,000-pound bull, and the crowd is yelling, it’s hot, and you know that something could step on you and seriously injure you or even kill you, you have to shut it all out and just focus. It’s similar for a traumatologist.

“When you’re in the emergency department, people are running around, and it seems like everything is chaos, you just have to focus and systematically get it done. You have to think on your feet, not get lost in the commotion, and make a decision at that moment.

“In both cases, there are a million things going on. But you have to do what needs to be done.”