Neurologist Returns to CU to Lead Program for Veterans

(December 2017) In spring 2017, the University of Colorado Anschutz Medical Campus a $38 million gift from the Marcus Foundation to establish the Marcus Institute for Brain Health (MIBH).

The institute, which will serve military veterans with traumatic brain injury and related psychological health issues, will be based on the Anschutz Medical Campus and will be the hub of a network of medical centers under development across the country.

At the announcement of the gift, Bernard Marcus, the retired co-founder of The Home Depot and founder of the Atlanta-based Marcus Foundation, said, “Our intent is to build a network of healing for those who served our country and suffer the invisible wounds of war.”

James P. Kelly, MD, professor of neurology, has been named director of the MIBH.

Kelly led the National Intrepid Center of Excellence (NICoE) at the Walter Reed National Military Medical Center for seven years. NICoE successfully treated more than 1,300 servicemen and women suffering from traumatic brain injury (TBI) and psychological health conditions using a patient-centered model that Kelly brings with him to the MIBH.

You are not new to the CU faculty.

This is my third tour of duty. I did my residency in neurology here in the 80s and then stayed for a year of what’s known as behavioral neurology, which is pretty well-established here. I was the first fellow here with Dr. Chris Filley, professor of neurology. I joined the faculty for four years and was here as an assistant dean of graduate medical education and a junior neurology faculty member.

Is that when you began studying traumatic brain injury?

My interest in TBI started during my fellowship when a young athlete was brought here basically brain dead after concussions two weeks apart and then having brain swelling – that’s called second-impact syndrome – and then dying from that.

I that out. Several of us on the faculty published an article in JAMA in 1991. That was my first peer-reviewed article. From then on, the concussion world here little by little became mine. I helped the University and Colorado Medical Society come closer together on a sports concussion protocol for physicians to use on the sidelines.

I left in 1993 to become the director of the brain injury program at the Rehabilitation Institute of Chicago. I was there and on Northwestern’s faculty for 10 years, from ’93 until 2003 and served also as residency director of neurology.

My wife’s a Denver native, so we’d always planned on coming back. We didn’t figure we’d be in Chicago as long as we were. I reinserted into the University, but through neurosurgery as opposed to neurology because they were much more interested in trauma. 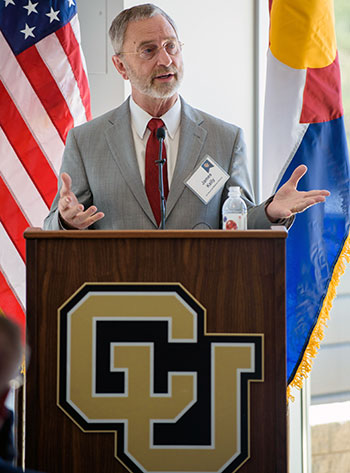 How did you get involved in providing care to members of the military?

The Defense Department recognized in about ’05 that they had a problem with guys coming back from Iraq and Afghanistan. Some of us with sports concussion backgrounds were asked to advise them. I was invited to a new committee as the national subject matter expert. They set up a TBI subcommittee and I chaired it. The general who was tasked with addressing TBI, PTSD, and psychiatric health problems called me into her and said: ‘You’ve been identified by your peers as the guy. Would you like to run this thing called the National Intrepid Center?’

This was in April ’08 and the plan at that point was to have a center of excellence for the most complex and comorbid neuropsychiatric cases coming back from the war zones, taking care of them and disseminating lessons learned in real time so that others could benefit from that care as well.

This center was intended to take care of the warriors coming back from the battle zones. The referrals came from big military centers like Fort Bragg and Camp Lejeune. We received most of our patients from those locations initially. Then the special operations community, the Navy SEALs, the Delta Force all the others, who had shorter but many more deployments, started to be referred more and to be self-referred. My job was to make sure it wasn’t just for them. I loved that part of it, but the truth is it couldn’t just be for the elite. It had to be for everybody. Everybody’s just as deserving, so let’s figure it out.

How did you meet the Marcus Foundation?

The model was well known to the people at the Marcus Foundation in Atlanta. Marcus Ruzek, representing the Foundation, visited the center while I was . He later was deployed in Iraq as a special operations guy. And when he came back he said: ‘What do you mean Kelly left? Where did he go?’

The center had opened in 2010. The generals and admirals in my reporting chain had asked me to stay after my initial two-year commitment. And I did it for five more years. At that point, things are up and running, so I moved back to Colorado. I had figured I was going to work at the center for two years, maybe four. Then it ended up being seven years because it was magnificent. I was getting to do stuff that was just unbelievable. The whole mission was like nothing else.

In any case, Marcus Ruzek contacted me and I was being recruited to Emory University at the time and so I said, ‘Listen, I’m coming down there for a recruitment visit. Let’s talk because that’s where the Foundation is based. I thought they wanted something on the East Coast. Or maybe in their home town. And the answer was, no. They said, ‘Where do you want it?’ And I said, ‘Really?’ I live in Colorado, it’s a magnificent place. I know a lot about it. It’s a healing environment. One thing led to another with discussions over the next almost two years. I left the center in August 2015. It was May this year when we made the announcement of the Marcus Institute for Brain Health. It was about a year and a half of ongoing discussions, planning and working with the leadership in the Chancellor’s office and the Dean’s office.

What advantages are there being here rather than elsewhere?

Colorado as a state is among the leaders in the newly retired or veteran population so that just made logical sense. The idea is that we have an environment where people go to decompress, a truly healing environment. That wasn’t happening in Chicago or Washington, D.C.

And the leadership at this particular campus is into this project. It’s not because they’ve been generals or admirals in the military. It’s because they’re devoted to veterans and they understand the history of this place. This place is so well-suited for this particular purpose.

You’ve got a former military medical center for the army, where President Eisenhower once received his care. We have home right next door. We have veteran programs in dentistry and in nursing that are part of the existing landscape. We have the Buckley Air Force Base clinic. We have one of the bigger VAs in the country, with a brand new state-of-the-art building that’s going to be great when it opens. To have them on this campus is spectacular. If you just put all those things together, there isn’t any other place like that anywhere in the country.

It’s hiring right now. Making sure we hire the right people in sequence. We must first administratively get this thing going and then the clinicians come. What’s happening now is getting people through the wickets of the hiring process and credentialing.

And we have this building (the Anschutz Health and Wellness Center), which was built while I was gone. I knew it was being built, but I didn’t know anything about this place. We come back to a place that has clinic and office space that we can lease. It’s in a destigmatizing health and wellness center as opposed to or hospital setting. These young veterans in their 20s and 30s want to reincorporate into places that are alive like this. It fit our mission beautifully.

My philosophy is that what we need to do is to help these veterans reincorporate and make the transition to civilian life, not create yet one more veterans-only system, but incorporate their health care into a civilian health care system.