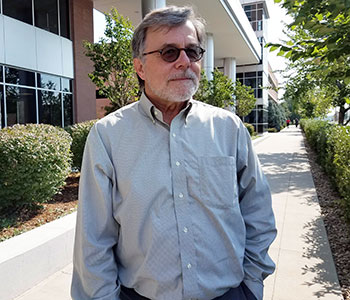 (April 2019) Twenty years ago, Russell Glasgow, PhD, recognized that researchers were identifying solutions to public health problems but many, including himself, were failing to put their discoveries into practice.

Troubled that useful and important research wasn’t living up to promise, Glasgow helped develop a framework to guide researchers around the world who want to improve population health.

The technique, called RE-AIM, which stands for Reach, Effectiveness, Adoption, Implementation, and Maintenance, became the preferred model between 2000 and 2016 for dissemination and implementation grant applications, according to the National Institutes of Health and the Centers for Disease Control and Prevention.

His work to bring scientific evidence to communities and health care sites has, for the second year in a row, elevated him to the top 1 percent of the world’s most influential researchers, as ranked by Clarivate Analytics. Glasgow, who is research professor of family medicine and director of the dissemination and implementation science program of the School’s Adult and Child Consortium for Health Outcomes Research and Delivery Science, has more than 2,000 citations to his work in the field of social sciences.

“He’s been truly influential,” said Jodi Holtrop, MD, associate professor of family medicine. “RE-AIM is the go-to framework for people who want to do dissemination and implementation research.”

Through his career, Glasgow has focused on communities where people struggle with addiction, disease, or multiple health conditions, particularly in in primary care, workplace, community health centers and low resource settings, where staff turnover is high and money is short.

“There’s no question that we have the best medicine and science in the world, but it has to trickle down to the people most in need, to people in poverty settings, where individuals are often left out and are the last ones to benefit,” Glasgow said. “That is truly adoption.”

“It worked,” she said. “I got some big grants funded, and I’ve been using it ever since.”

Holtrop’s work has focused on prevention and management of chronic conditions, particularly diabetes and obesity.

“You go to your doctor and you’re told you have diabetes,” she said. “Years ago, you might have gotten some pamphlets. You might even have been told where to go for a blood glucose monitor. You’d get a prescription for insulin and, maybe go to a class somewhere.”

Problems with adoption and successful implementation still limit public health research, said Glasgow, who came to CU in 2013 from the National Cancer Institute where he was deputy director for implementation science at the Division of Cancer Control and Population Sciences.

“Let’s take blood pressure for example,” Glasgow said. “We have incredible evidence that taking a certain medicine or following a certain diet will affect your blood pressure. What we have little evidence on is, first, how you get this information out so that people will come in to get treatment? Second, can they afford treatment? Third, can they keep doing what they’re supposed to do? Fourth, can this work in a realworld low-resource setting? And finally can it continue over time? Our science stops short of that.”​