(May 2018) Rumbling along the rails, a train lugging 18,000 tons of freight hisses and chugs, and then the engineer blows the whistle.

It’s the sound of American progress. For Stephen Mullen, it’s the especially sweet echo of his life’s work.

For 20 years, Mullen has worked as a train engineer. These days, he guides freight runs from Denver to Trinidad in southern Colorado.

A scary experience last year threatened his future on the railroad and his ability to hear the trains.

In January 2017, Mullen, 46, felt some tingling in his jaw. At first, he thought he was having e sort of allergic reaction. But the dull feeling persisted.

Mullen called his primary care providers at UCHealth’s Family Medicine Clinic in Westminster. A nurse said the strange sensation could be a sign of something serious, like a stroke. It was nearly 4 p.m., too late to get in that day, so she urged him to go to an ER.

At about 5 p.m., another nurse followed up with Mullen, arranging an appointment for the following day with Mullen’s primary care provider, Anju Visweswaraiah, MD. She also told Mullen that he should get checked out that night. He took her advice.

The next day, Mullen came the Westminster clinic and shared some shocking news with Visweswaraiah.

Scans from the ER the night before showed he had a large growth on the left side of his brain called an acoustic neuroma or a vestibular schwannoma. To his relief, Mullen learned that his tumor was almost certainly non-cancerous.

But brain tumors can threaten , and Mullen faced losing his hearing on his left side.

Without his hearing, Mullen feared he would not be able to do his job. On the trains, Mullen communicates constantly with dispatchers through a radio system and he must respond regularly to sonic alerts.

Visweswaraiah, who is also a senior instructor with rsity of Colorado School of Medicine’s Department of Family Medicine, immediately connected Mullen with a neurosurgeon and an ear, nose throat specialist at University of Colorado Hospital.

They confirmed that the tumor was not cancerous. But if left alone, the tumor would continue to grow. It had to come out, but the surgery could leave Mullen unable to hear on one side.

“That was probably the scariest moment,” Mullen said. “They told me that I had a 95 percent chance of losing all my hearing on my left side because the tumor was intermingled with the hearing and balance control (centers) in my brain.”

Even so, Mullen felt lucky he’d learned about the tumor relatively early.

“Many people wake up one day and have no hearing and never get it back. I was lucky I was paying attention to my body.” 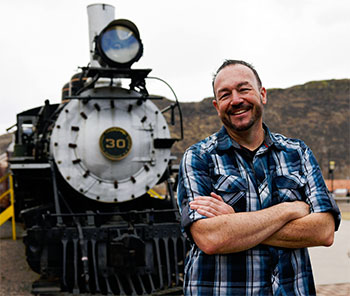 Mullen’s wife, parents siblings, two of whom also work for the railroad, rallied around hd he went in for the surgery on February 23. The surgeons carefully removed nearly all the tumor. They deliberately left a small piece – while cutting off blood supply to the tumor – in hopes that Mullen could still hear the whistles and other sounds at work.

When he woke up, he got great news.

“They told me it was a very successful surullen said.

The one side effect has been a persistent ringing in his ear, but the surgery preserved Mullen’s hearing. At first, he felt like his ear was plugged up. Then, little by little, his hearing improved.

“By the third month, I was up to 95 percent. It’s incredible. I’m so grateful to Dr. Youssef and his team. They did such a wonderful job,” Mullen said.

Mullen has found himself appreciating even mundane sounds.

“We take things for granted: horns honking, the dogs barking,” he said.

He and his wife have two Morkies, a mix of Yorkshire terriers and Maltese.

“Being able to hear the jingling of their collars as they were climbing up into bed was great,” Mullen said. “And you notice the small things, listening to birds, even the traffic.”

Along with the brain tumor, Mullen had also been dealing with high blood pressure. So, all year, he has continued to see Visweswaraiah and her team frequently.

“We have been fine-tuning my blood pressure medications,” he said. “I’ve been lucky to have her as my primary care physician. I have the best of the best.”

Visweswaraiah credits Mullen for being caring about his health and paying attention to the subtle tingling in his face.

“He’s an amazing patient,” she said.

Mullen’s good instincts allowed her team to provide seamless care. Any time Visweswaraiah needs to consult with a specialist, she can call UCHealth’s DocLine and immediately speak with an expert.

“I can have a neurosurgeon on the line in two minutes,” she said.

And Mullen had to have his blood pressure under control.

“When someone has very high blood pressure, it’s less safe to have brain surgery,” Visweswaraiah said.

When Mullen was first recovering, he had to be careful about his balance and the left ear felt like it was under water. He felt like his brain compensated and he was able to tune in to sounds more intently with the right side.

Once he’s a full year out from his surgery, Mullen’s doctors can try to address the ringing. For now, he’s learned to live with it.

Along with hanging out with his wife and her two children, Mullen enjoys riding his motorcycle and building and flying drones.

Getting to go back to work has been a real blessing.

“I missed it. I love my job. It was a wonderful feeling to get back out there,” he said. “I’m so happy and grateful to do the simplest things that I used to take for granted, like blowing the horn for a crossing. The first time I was able to do that and I didn’t have any problem was unbelievable. The confidence comes back and you think, ‘Hey, I can do this.’”

This article first appeared in UCHealth Today in January 2018.