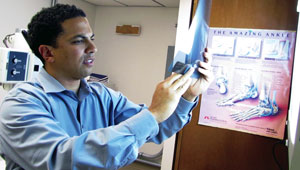 Then the kicker’s foot drives forward and Ozzie Grenardo’s world goes silent, reduced solely to the sight of a football flying toward him.

Number 22 catches it and looks upfield at the melee of players. He starts to run.

“It’s a beautiful focus,” Grenardo says. “I’m a terrible artist, but what I did in football was as artistic as I could get. It’s about instinct and flow.”

At one point in 1991, Grenardo led the nation in kickoff return yards and set two Stanford records that endure today. He figured he could turn pro.

Doug is Douglas Miller, the longtime nurse practitioner at the Rocky Ford Family Health Center. Grenardo is medical director here and at a clinic in neighboring Ordway, 50 miles east of Pueblo. Iced tea at the ready, hip-hop on the radio, fueled by fast food, he drives the five-hour round trip from Denver to the Eastern Plains once every two weeks.

His route takes him past plain and a convenience store where nine pots of morning coffee are brewing. 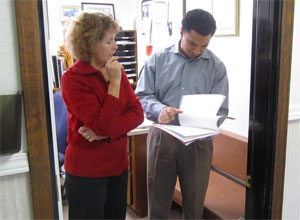 The clinics, where few patients are insured, further Grenardo’s longstanding commitment to primary care and outreach. In medical school, he was one of five students nationally to win a Pisacano Scholars award for commitment to family medicine.

“I love working with these people,” says Grenardo, 38, who grew up in Colorado Springs and graduated from CU School of Medicine in 2005. “I’m building relationships with the communities and I love the health care providers.”

Grenardo grew up in modest circumstances. His mother, a white woman from Poland, and father, a black man from Guyana, “instilled in me that there are people who didn’t have the same opportunities we did. We should give back.”

Football first, he figured, then a meaningful job. He went to Stanford on a full scholarship and found that “beautiful focus.”

And then he lost it.

Sports came too easily to Grenardo. After a super first year, when he set those return records, Grenardo coasted. His coach benched him. The pro career he dreamed of was out of reach.

“It was the best lesson I could have learned, losing the dream of playing in the NFL,” Grenardo says.

Chastened, Grenardo went on to get an MBA in health administration from the University of Colorado Denver. He worked in health care for six years but kept thinking that he could contribute more as a doctor. He studied more and got into CU’s medical school.

Today, along with his rural route, Grenardo runs a family practice in the Denver suburb of Parker, heads community outreach for the medical school’s admissions office and is a volunteer CU medical faculty member.

The admissions team in two years has about tripled diversity in the first-year classes. When Grenardo talks to students, he tells them the football story—how he had it, blew it, then rescued himself with hard work.

Ozzie Grenardo sits in a Rocky Ford exam room opposite one person, a woman struggling with depression. Oblivious to the rumble of a nearby coal train, he asks her questions, gently eliciting her story. They talk like old friends. The patient leaves with a plan. She’s smiling. Could anything fully replace the jolt Grenardo felt from excelling on the field while the crowd roared? Maybe not. But in that exam room, Grenardo again blocks out the noise. He uses skill, plus some instinct and flow. As he did in the glory days, he focuses, beautifully, on the most important thing.