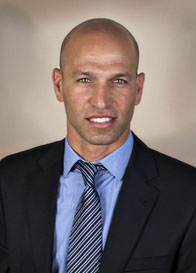 “Was that two shots or one?” asks the barista at the coffee kiosk in the Anschutz Outpatient Pavilion.

Mei-Dan, buzzing at 1 o’clock in the afternoon, is taking a quick break from seeing patients. He’s fiddling with emails on his smartphone. He paces in the lobby. He returns a call. He talks so fast that he has to repeat his name three times to the person on the phone.

He’ll have one shot, thanks. He only needs one shot.

When he bounded into Colorado a year ago as an assistant professor of at the School of Medicine, he found a home for his passion for extreme sports as well as his professional expertise in hip preservation and in treating extreme-sports injuries.

For 20 years, Mei-Dan was a freelance stuntman, appearing in commercials for the likes of Coca-Cola and McDonald’s. He also did the occasional movie. He once had a Red Bull sponsorship, as part of its Global BASE jumping team. Yes, he repped for the energy drink that advertised it “gives you wings.”

That’s right. This guy can fly. He once jumped off the top of the Eiffel Tower.

Mei-Dan has tested himself in many outdoor adventures.

Skiing and snowboarding. Of course.

He also has logged extreme endeavors that don’t even have a name: bungee jumping with a kayak, skydiving with a bike, parachuting into the back of a moving pickup truck.

Being a daredevil doctor does not make him a danger junkie, Mei-Dan says. Rather, the feats are so precise, they’re akin to his work as a physician: painstaking attention to every minute detail, a mountain of preparation before any procedure and a willingness to recognize the limitations imposed by the conditions he’s facing. It’s a full awareness of being, where he is, whatever he is doing.

“It’s like surgery,” he says. “Once you have the tools, you can fix almost every pathology.”

While most people might say jumping off a tall building in a wingsuit is a pathology, Mei-Dan says it’s a calculated risk that he only takes when he feels he’s in control.

Even those odds aren’t good enough anymore, now that he’s the father of three children: 8, 6 and a little one just 3 months old. He would say his chances of success in any extreme sport these days are more like 99-1.

“I would say that in the past two decades performing these stunts I’ve turned around and not jumped more often than I have jumped,” Mei-Dan says. “If pieces didn’t all fall into place as planned, I just would not do it and I’d go back some other time.”

These experiences give Mei-Dan an unusual insight into certain kinds of injuries. He recently served as co-editor of Adventure and Extreme Sports and Injuries: Epidemiology, Treatment, Rehabilitation Prevention.

“Dr. Mei-Dan brings to the Department of Orthopaedics a unique skill set pertaining to hip preservation that is done in only a few centers around the world,” said Robert D’Ambrosia, MD, chairman of the department.

Mei-Dan says he grew up in a kibbutz in northern Israel. His father is a pediatrician and his mother a psychologist. He earned his MD at University of the Negev in 2002. He traipsed around the world—Europe, Australia—to learn his craft.

One key experience was with the world-renowned FC Barcelona, one of the most successful soccer teams in the world. In that hypercompetitive world, working on top-dollar talent can have multimillion-dollar repercussions for the whole organization.

“You know that there are major consequences that all come down to the surgeon’s hand,” says Mei-Dan. “When you operate on a $15 million knee, you know a lot depends on you.”

The player, the team, the potential for a league championship, the business arrangements, the marketing deals all ride on the surgeon making careful decisions and using technique, not unlike taking that leap off a tall building.

“It was a lot of pressure,” Mei-Dan says, “and I love pressure.”