Medical Detective Michael Kosnett Gets the Lead Out 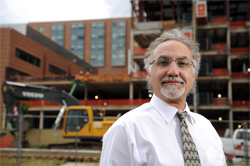 (October 2011) Nearly two decades ago in California, a 6-year-old inexplicably started to lag behind his classmates.

Last year in a remote region of Nigeria, hundreds of children began to die, while scores of others suffered neurological damage.

The California child’s father, it turned out, worked in a plant recycling lead batteries for forklifts and golf carts. He brought traces of lead dust home on his clothes, slowly and accidentally poisoning his child. The lead level in the child was 10 times higher than normal while the was 20 times higher.

In Africa, when gold was discovered in the region and impoverished farmers began to dig for the ore, they ground rocks with dangerously high levels of lead with the same tools they used to grind corn.
Kosnett, a member of the CU medical school’s clinical faculty, is a medical detective of sorts. His rare specialty, which combines occupational medicine with toxicology, has catapulted him onto the world stage, making him a go-to expert in and .

He also has helped the U.S. government respond to the lead found recently in toys from China and serves on the Centers for Disease Control advisory committee on childhood lead poisoning prevention.

“As a medical toxicologist I feel it is not enough to treat patients once they get poisoned but rather take an active role in preventing hazardous exposure,” he says.

His mission is rooted in the 1960s when he was a boy in the New Jersey suburbs and was warned away from a stream near his house because it was polluted.

By age 16 he was reading environmental impact statements and working to block a highway project that would have cut through a nature park.

After graduating from Yale University with a degree in molecular biophysics and biochemistry, he was at a crossroads. He could have become an environmental scientist but ultimately was pulled toward the idea of looking at toxins in the environment and workplace through internal medicine.

Charles Becker, MD, now retired from the University of California, San Francisco, School of Medicine, remembers Kosnett as a driven student with a rare grasp of exactly what he wanted to become. Where many doctors tend to look for answers and solutions based on previous experience, Becker says Kosnett always wants to dig deeper.

“It’s not your typical medical practice,” Kosnett admits, adding that there are only a couple hundred specialists like him in the country.

The effects of heavy metals such as mercury, lead or arsenic on the body do not fit neatly into any one discipline.

Some patients are acutely ill in the emergency room while others are chronically ill from low-dose exposure over decades. Still, the implications are huge. While lead exposure has been greatly decreased since the 1970s, it is still a problem. In fact, Kosnett says regulations haven’t kept up with research. Scientists now know that exposure levels once thought to be acceptable are potentially dangerous.

Because his work impacts not only patients but also advocacy groups, industry and policy makers, he is careful to let science, not politics, drive his decisions. One day he can get a consultation call from the Sierra Club, the next day from Chevron. He also sees some patients.

Some cases stick with him, such as when he advised a low-income North Denver community group on its efforts to get decades of lead and arsenic contamination in their neighborhood cleaned up.

“When we went into negotiations with the EPA we came out very well. We were armed with knowledge,” remembers Anthony Thomas, who credits Kosnett for their victory at what later became known as the Vasquez Boulevard/Interstate 70 Superfund site.

Kosnett counts himself lucky to be doing exactly what he wants to do. And he believes his vision for a healthier planet is contagious.

“I have faith in people,” he says. “When given the right information people will always support a healthy environment.”