What She Said about Children's Hearing Changed the World

(October 2011) It would be difficult to overstate Marion Downs’ impact on the world.

Hundreds of thousands of people are living normal, productive lives thanks to Downs’ firm belief and dogged determination that children should be tested for hearing loss at birth so they can begin to learn language early, preventing communication and cognitive problems as adults.

Once that was a radical notion. Now nearly all infants in the United States are hearing tested at birth, a policy initiated by Downs, who became CU School of Medicine’s first director of audiology in 1959 and
now is distinguished professor emerita. 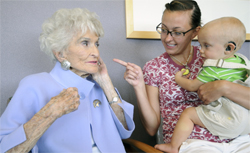 “Even in states without laws, it is best practice at hospitals,” according to Sandra Abbott Gabbard, , co-director of the Marion Downs Hearing Center. “But we like to claim the fame— we were the first hospital to test all babies for hearing loss.”

At a recent luncheon in Downs’ honor, a man who’d been born with a hearing disability approached her and said “I want to thank you for my life,” Downs’ partner, Richard Gray, remembers.

Encounters like that one, Downs says, “make me feel like I validated my parking ticket.” Now 97 years old, Downs remains in close touch with the staff of the Marion Downs Hearing Center at of Colorado Hospital, which was created to honor her legacy.

Long before her ideas were widely accepted, Downs was leaning over University of Colorado Hospital nursery cribs, ringing bells, blowing horns and shaking noisemakers to try to determine what sounds infants could—and should—hear.

“It took years for technology to catch up with her,” says Gabbard.

Downs published her first paper advocating early testing in 1964. “Some people were fascinated, others were skeptical,” she says. A few were downright hostile to the idea.

Downs and her coworkers had been putting hearing aids on children as young as 1 and 2 years old in the 1960s when she went to a national conference and heard a leading expert give a speech saying that “putting hearing aids on young kids was criminal because their brains hadn’t matured yet. He said we were damaging them.

“That disturbed me, of course. That night I went to the leading physiologist in the field and said ‘Is
true? Will we destroy the neurons in the brains of these children?’

“He thought for a long time and then he said, ‘It will not hurt them.’”

She had a difficult decision to make.

Downs began traveling, giving talks and performing tests. She was willing to go anywhere, which sometimes put her in danger.

She survived a Continental Airlines plane crash in New Orleans. Another time her equipment was blown up in a grenade attack while she was visiting South Vietnam during the war.

“I was five minutes from being in that car,” she says. “Everyone in it was killed.” 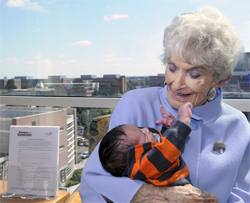 The international accolades made Downs’ pragmatic entry into the field of audiology all the more ironic.

It was 1947 and her three children were growing older so she decided to run over to the University of Denver one afternoon and sign up for some classes.

She arrived on campus and found line upon line filled with returning GIs from World War II.

Knowing she had to be home when her kids returned from school, she selected the shortest line: the new field of audiology.

“I had never heard of audiology,” says Downs, who says she’d given some thought to becoming a lawyer. “But it sounded interesting. It didn’t matter what I did. I needed to stop washing dishes.”

“Marion was unusual,” says Gabbard, who came to CU in the 1980s specifically to study with “the famous Marion Downs.”

The field was dominated by men, and Downs often volunteered to bring coffee to meetings to gain entry. But being a woman also gave her an edge over her male colleagues when it came to dealing with young patients.

“She was comfortable with children,” Gabbard says. “She was a Girl Scout leader and a mother. She understood childhood development.”

The stories about Downs’ unique ability to work with children are legion.

"I remember we had a difficult-to-test child here; he was running around and the mother was apologizing to us. We did some very crude tests, shaking rattles and making noises. When we left the room, Marion says to me, ‘I think this child has a mild unilateral hearing loss in his left ear.’ And, you know, after all the testing was done, it turned out she was right. That’s exactly what he had.”

Downs says she had to learn to diagnose hearing problems because the technology to do so developed later in her career.

“I could listen to a child who was crying or making noises in the waiting room and know exactly what the hearing loss would be,” she says.

“I felt a fellowship with the parents,” Downs said. “I found that what you have to do is tell them what it is and then listen to them. We think we know what they should do, but it’s important to listen to them. Find out how they feel about this and then find a way to help them.”

“The elimination of discouragement” is how LaFawn Biddle describes Downs’ approach.

Downs diagnosed Biddle’s two daughters and three of her grandchildren with hearing loss.

Her daughters, now in their 50s, were tested late by today’s standards—at 3½ years for the first daughter, 11 months for the second. By contrast, her grandchildren came of age at a time when infant testing was de rigueur.

All were tested immediately at birth and were fitted with hearing aids within the first year.

The difference, Biddle says, is dramatic.

Her grandchildren “learned faster, they think on their feet, they respond to spoken language. They matured early and lead very normal full lives. No, not normal—outstanding lives.”

Of Downs’ more than two dozen great-grandchildren, one was born with a hearing loss.

Her granddaughter told the audiologist that her grandmother wanted to talk about the test results.

“Not the Marion Downs!” was the audiologist’s reply when she learned the grandmother’s name.
“Until then, her granddaughter had no idea how well-known Downs was in the field,” Gabbard
says.

That doesn’t surprise the people who know Downs well; her modesty and habit of sharing
credit for her successes also well known.

“I’ve had some ideas that weren’t good, believe me,” Downs says, deflecting the praise that she
often hears. “But I’m an optimist. That’s my problem. All my life I thought just around the corner something wonderful is going to happen. And it always did.” 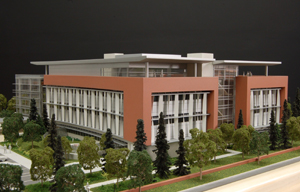 The Marion Downs Hearing Center is home to a world-class blend of professional expertise and community engagement. But programs and clinical
work fragmented on campus, making it difficult for the practitioners and staff to collaborate.

The center is in the process of raising funds to build a center to join
geographically on the Anschutz Medical Campus. The new building will allow the center to expand clinical space and offer a wider variety of services including genetic
counseling. It will also offer surgical training, improve research and reach out to children and adults in the community.