(May 2015) This May, Kjell Lindgren, MD ’02, is set to become the only University of Colorado School of Medicine-trained astronaut in space when his mission to the International Space Station launches from Kazakhstan.

But he doesn’t plan to be first-and-foremost a physician in space.

“Not every expedition has a physician as part of the crew,” Lindgren says. “But all crew members are trained as ‘crew medical officers’ to be effective physician extenders for the flight surgeon on in Mission Control. If there were a medical issue during my expedition, we would still work with the ground team, but I would be able to bring an additional level of expertise to the situation.”

That’s not to say the skills he learned in medical training won’t be handy.

“I will be able to utilize my procedural skills in some human research studies—where we are the subjects—that use venipuncture, ultrasound ocular diagnostics,” Lindgren says.

Lindgren has been training since 2009 when he was selected by NASA to become an astronaut and in recent months has been focused on this specific mission.

“I was part of the backup crew in November, so from a knowledge and skills perspective, I had to be ready to fly back then,” Lindgren says. “That means I’m technically proficient and qualified on all the essential duties of a space station crew member. I am ready to fly the robotic arm, be part of a team, conduct research in our payload facilities or maintain or fix space station hardware.

“Now that I have just a few months until launch, I spend a lot of time training on the specific scientific payloads I will be working with during my mission,” he says. “Every day is different. It is an intellectually and physically invigorating and challenging schedule.” 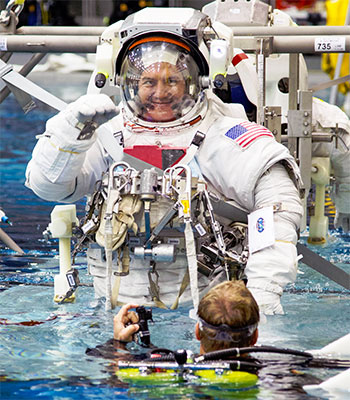 Lindgren says he dreamed as a child of being an astronaut, but he also understood that few have the right stuff. To get into the two-year training program, Lindgren competed with 3,565 initial applicants. Only 113 of them got an interview and only 48 became finalists. Of those, NASA allowed only nine to enroll in training.

“While I realized that the odds were not in my favor, I kept that dream in the back of my mind as I pursued fields of study and a more career that I had a passion for,” Lindgren says. “I felt that medicine, particularly emergency medicine, was a great fit for me and I feel very blessed to have started that journey at the University of Colorado.”

The mission launches from Baikonur Cosmodrome, Kazakhstan, on May 26th at 1:46 p.m. MDT and Lindgren expects to spend six months on the station. He will be part of the 44th and 45th missions to the space station, according to Norma Jennifer Knotts, public affairs specialist for NASA.

The time away from home for training has probably been the most difficult part of the training, Lindgren says.

“My family is amazing,” he says. “This has been an incredible journey for all of us and I’m grateful that they are getting to share in all of the excitement and fun. We are all a little anxious about six months of separation, but looking forward to the adventure ahead. I’m deeply grateful for the love and support I’ve gotten from my family. I couldn’t have done this without them.”

Lindgren also credits CU with helping prepare him for his upcoming mission.

“This amazing opportunity has very little to do with what I have accomplished, but speaks volumes of the family and friends, mentors and instructors who have invested in me over the years,” he says. “The professors, instructors, office staff, classmates, friends patients I worked with at CU have helped me get where I am today.”