By Jim Spencer and Dan Meyers 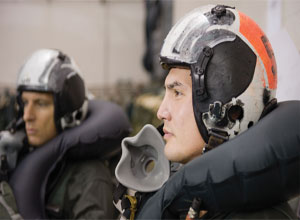 Kjell Lindgren dreamed of being an astronaut for as long as he can remember.

But he waited to apply.

"I felt I needed a certain amount of experience," he says.

A bachelor’s degree in biology from the Air Force Academy wasn’t enough for Lindgren to feel prepared to chase a lifelong dream of riding a rocket into space—neither was a master’s in cardiovascular physiology from Colorado State University.

Hundreds of parachute as a team member and jumpmaster with the Air Force Academy Parachute team? Nope. Even a 2002 medical doctor’s diploma from the University of Colorado School of Medicine didn’t convince Lindgren that he knew enough to be an astronaut. So then came a residency in emergency medicine at Hennepin County Medical Center in Minneapolis, Minn., and a master’s in health informatics from the University of Minnesota, which helped him apply information theory to the practice of clinical medicine.

And then he earned a master’s of public health from the University of Texas Medical Branch at Galveston (UTMB). Finally, he landed a residency in aerospace medicine at UTMB followed by work as a flight surgeon, supporting medical operations and space-station training at NASA’s Johnson Space Center in Houston.

That role got him working with astronaut crewmembers in the U.S. and in Star City, Russia. At last, he felt he was ready to apply to be an astronaut.

His journey started early. At age 11, Lindgren says, he decided that the best way to achieve his goal was to go to the Air Force Academy.

He wrote asking for an application, but the Academy apparently thought that 11 was a bit too young; he never got a reply. Author Tom Wolfe might not have found Kjell Lindgren as colorful as the original NASA astronauts he profiled in his famous book, but there is little doubt that Lindgren has The Right Stuff. To get into the two-year training program that will likely make him the School of Medicine’s first alumnus astronaut, Lindgren competed with 3,565 initial applicants.

Only 113—roughly one in 25—even got an initial interview. Of those, only 48 became finalists. And from those 48, NASA allowed just nine to enroll in training. Lindgren credits medical school in Colorado not only with training him to be a but also with showing him how to be a professional.

Just as he’s prepared in many ways for his role, Lindgren also has many reasons for wanting to do this.

“I’m inspired by the opportunity to explore—to experience the Earth and moon from a unique perspective,” he says. “I’m excited about conducting science. The International Space Station is nearing completion and it’s going to be an amazing research platform. Ultimately I’m excited to be a part of a team that is extending our presence and capabilities in low-Earth orbit and beyond.”

By the way, Lindgren did read The Right Stuff, but while he found it interesting it was no more inspiring many other biographical and historical books on space flight. (If you’re considering a second career, here’s what is on Lindgren’s “so-you-want-to-be-an-astronaut” reading list: Carrying the Fire, by Michael Collins; Flight: My Life in Mission Control, by Chris Kraft; Deke!, by Deke Slayton; and A Man on the Moon, by Andrew Chaikin).

Lindgren’s preparation paid off when it came time for NASA to pick from among thousands of talented astronaut applicants.

“I think I had a versatile background with emergency medicine and military experience in an operational setting,” Lindgren says of his selection. “I was used to decision-making under high pressure in a team environment”—not a bad thing if you’re going to spend six months in the cramped quarters of a capsule and a space station.

In fact, teamwork has been a hallmark of Lindgren’s journey so far. He says his parents, sister, wife kids, teachers, mentors and colleagues all got him where he is today.

“It took a team effort for me to achieve this goal,” Lindgren says. For Lindgren, on track to be the University of Colorado system’s 18th astronaut, the honor comes fraught with “a certain amount of risk.”

A thirst for exploration

He’s well aware of past tragedies, including the space shuttle Challenger disintegrating shortly after takeoff, the Columbia shuttle breaking apart as it headed for a landing and the fatal fire inside the Apollo 1 capsule on the launch pad. He’ll take the chance in exchange for the opportunity to accomplish what almost no one on Earth gets to do.

He confesses to a “thrill of exploration” and says he is “just plain excited about riding a rocket into space.” “My family has been incredibly supportive,” Lindgren says. “My wife knew I had a passion for this when we got married.”

It’s unclear when Lindgren might get that rocket ride he’s dreamed of since he was a boy. He’s not officially an astronaut yet, just an astronaut in training at the Johnson Space Center. Lindgren has exercised himself into excellent physical condition. He possesses remarkable tolerance for multiples of the force of gravity called Gs. His spatial orientation qualifies as great, as does his vision.

“The analogy I would make is to medical school,” he says. “You’re not a doctor yet, but you’re learning the skills. They do what they can to get you through, and most people who are selected make it through.”

Astronauts who make it through must “wait in line” to get a ride on the space shuttle or whatever craft succeeds it, Lindgren says. Meanwhile, astronauts work in space-related endeavors, such as capsule design, communications, mission control or robotics. But no one signs up just to do those tasks. They are merely placeholders until the dream of space travel comes true. Kjell Lindgren isn’t worried, though.

He’s already proved that he can wait until the time is right.